Prime Minister Narendra Modi’s second visit to the U.S. was, as usual, a well-crafted combination of politics and business. The highlights of the trip were a standing room only reception at San Jose, where PM Modi addressed the Indian tech community, and a one-on-one with President Obama, their third bilateral meeting in the last year. This second U.S. trip made two things clear. First, India remains keen to position itself as a global power, vis-à-vis the region it occupies. Second, investors remain optimistic about India, although they continue to wait eagerly for further reforms. The visit also reinforced the Modi government's strategic direction, which is built on two key pillars: economic growth and geopolitical engagement. 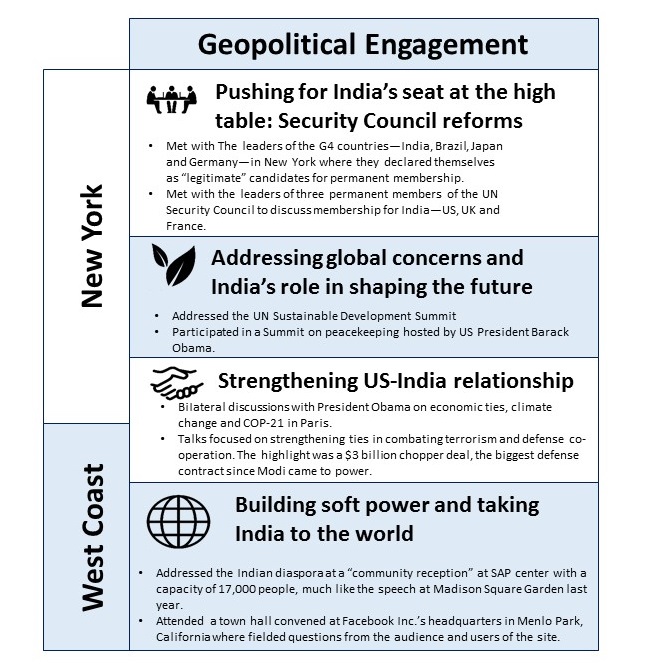 PM Modi’s first visit to the U.S., his first foreign trip after assuming power, set the stage to showcase to the world what the new government in India stands for – one that is unabashedly pro-business, committed to economic reform and ready to play a larger leadership role globally. The first trip created high expectations in the business community, and brought renewed attention to India. The last year, however, has demonstrated that India’s large scale and complex democracy allows for only incremental reforms, despite strong commitments from the government and prime minister. Though the government has made significant progress in the last year, the scale of India’s economic ambitions, its infrastructure goals and its job-creation priorities require larger trade and investment flows.

PM Modi’s second U.S. visit, along with the excitement created domestically and internationally, has reinvigorated the conversation around the ‘new Indian opportunity’ that businesses cannot ignore. It has created bigger expectations from everyone, setting the stage for Modi’s government to work hard to deliver on a second round of changes in India, including further economic reforms to ensure that excitement translates into investments, especially in key sectors such as manufacturing, infrastructure and technology, and increased trade.

PM Modi’s second visit to the U.S. reinforced the new partnership between India and the U.S., which began last year with his first visit and was strengthened by President Obama’s visit to India in January of this year. The two countries announced several new areas of cooperation during the first Strategic and Commercial Dialogue, and PM Modi’s bilateral meeting with President Obama produced a substantial discussion among the leaders on renewable energy and India’s role in the Asia Pacific region.

On the economic side, PM Modi’s visit generated renewed excitement about investment in India among American companies. On the West Coast, several tech companies made concrete investment commitments, including Microsoft, Google and Qualcomm. However, business leaders are still waiting to see real improvements to the ease of doing business on the ground in India. When PM Modi asked CEOs for advice during his dinner in New York, many were eager to offer suggestions about how to improve India’s challenging bureaucracy, infrastructure and tax regime. Hence, despite the continued excitement exhibited towards the India opportunity, demand for action has also grown with the second visit.