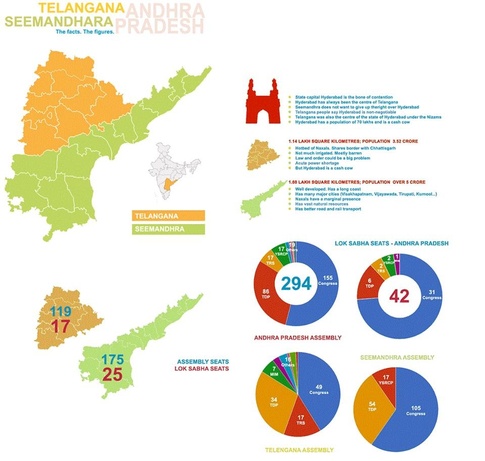 Bifurcation of the state of Andhra Pradesh into Telangana and Seemandhra has been a long-standing demand of several constituents in Telangana, the largest of the three regions in Andhra Pradesh. The petition for dividing the state, which first emerged in 1969, has snowballed in the last ten years into a major political movement, disrupting normal state functioning and adversely impacting business sentiment. The issue figured prominently in the run-up to the AP state elections in 2004 and 2009, and has emerged as the biggest agenda item ahead of the 2014 state and national polls. Yet there is no resolution in sight. The protracted agitation continues as political parties remain ambivalent about the altered political dynamics of a restructured state.

The regional arithmetic of AP politics

In a bid to secure their interests in both regions, nearly all political parties are irresolute on the issue of Telangana, making turnarounds to suit political expediency. As things stand, the Congress-led UPA at the Center wants the creation of India’s 29th state even as Congress leadership in the state is divided on the issue. In July 2013, the Congress Working Committee approved the creation of Telangana. The Union Cabinet endorsed the decision in October, triggering strong protest within the local Congress party. The Congress hopes its support of Telangana statehood will pay rich political dividends among pro-division constituents of the state, but it may be undercut by the Telangana Rashtra Samiti (TRS) – an equally potent political force in the region.

The TRS was founded in 2001 to fight for a separate state of Telangana, and has remained the torchbearer of the separate statehood movement. The Congress hopes to ride to victory in Telangana by forging an alliance with the TRS, but TRS is noncommittal on the prospective merger. If it is able to bolster sufficient numbers in the state election, the TRS may seek to establish its own political identity in the new state rather than embrace the Congress, upsetting the latter’s larger political game plan.

The Telugu Desam Party (TDP) is another prominent regional party inclined in favour of Telangana. By supporting the division, the TDP hopes to re-establish its hold in Telangana, although it runs the risk of denting its prospects in Andhra-Rayalaseema regions where it currently enjoys political mileage. The YSR Congress (YSRC) – a regional break-away group of the Congress – is the only party to unequivocally support a unified state. It has thrown its weight behind the ongoing anti-bifurcation agitation in Seemandhra; and its influence, if any, will now be confined to Andhra-Rayalaseema regions.

In the emerging scenario, TDP and YSRC will be the main contenders for power in the Seemandhra region, whereas TRS and Congress may play greater role in Telangana region.

AP politics at the national level

The Bharatiya Janata Party (BJP), Congress’ primary rival, has adopted a pro-division stance, antagonising its supporters in the Andhra-Rayalaseema regions. The party has not been able to gain much political momentum in Telangana either, with the Congress beating it in the pro-Telangana game. The Communist Party of India (CPI), a part of the Left Front, enjoys moderate influence in Telangana and therefore supports division. However, whether its stance will help the party make any gains in the next elections is still uncertain. The Communist Party of India Marxist (CPM), another Left party with national influence, may not gain much across the regions unless it forges an alliance with the YSRC, as is being speculated.

Impact of division on business climate

Prevailing political uncertainty and frequent protests over bifurcation have taken a toll on the business environment in the state, not only in its capital city Hyderabad but also in the other commercial hubs of the state such as Vijayawada, Kakinada and Visakhapatnam. According to a survey by the industry chamber Assocham, sixty-seven per cent of the CEOs surveyed felt that the biggest casualty of the Telangana impasse was investment in Hyderabad, particularly in the IT sector.

Hyderabad has been among the top destinations of the foreign direct investment with cumulative FDI of $8.6 billion between 2000 and 2013. The city witnessed an increase in FDI in 2012-13 to $1.16 billion, up from $848 million in the previous year. However, the trend may not continue unless there is clarity on the political situation. Apart from global IT investors remaining wary, those seeking opportunities in state infrastructure like hotels, transport and ports are also less likely to invest in the face of uncertainty.

Real estate has also taken a hit. According to the research agency CRISIL, residential capital values in Hyderabad have stagnated since 2009, driving investors to other cities such as Bangalore and Chennai. However, analysts believe that with the Cabinet approval of the formation of a separate state, real estate prices are set to rise again in the immediate term.

Andhra Pradesh Reorganization Bill: What next?

While the Congress-led UPA government has given its go-ahead for the bifurcation of Andhra Pradesh, the actual formation of the state is still a long way off. The resolution for a separate Telangana cannot be enacted unless the Andhra Pradesh State Reorganization Bill 2013 is passed by the Indian Parliament.

The Bill, which was introduced in the winter session of the Parliament in December 2013 was subsequently sent to the AP state legislative assembly for discussion, with a 43 day deadline to return it. Leaders in Hyderabad are divided on the Bill. While the Congress chief minister N Kiran Kumar Reddy is opposed to the move, his deputy, Damodar Raja Narasimha, is in favor of a separate Telangana state. The AP Assembly rejected the Bill last week, returning it to the Center with suggestions and amendments. While the state’s feedback is not binding on the Center, the UPA government could find it harder to get the proposal cleared in the Parliament now that it has been defeated in the state legislature. The Bill is expected to be introduced in parliament this week through the Rajya Sabha, the upper house, as this will ensure the bill remains “alive” once the current Lok Sabha is dissolved and fresh elections ordered. Furthermore, there are fewer Rajya Sabha MPs representing constituencies in Seemandhra, which means moving the bill forward could be easier. Last Friday, the Union Cabinet officially rejected demands to make Hyderabad a Union Territory.   The BJP, for its part, has stated its support for the bill is conditional on a financial package for Seemandhra that bridges the projected revenue gap that will result from the split. If the bill is not passed in this last parliamentary session, Andhra Pradesh will remain undivided for the polls and uncertainty over Telangana statehood will continue.