Round-up of the Budget Session 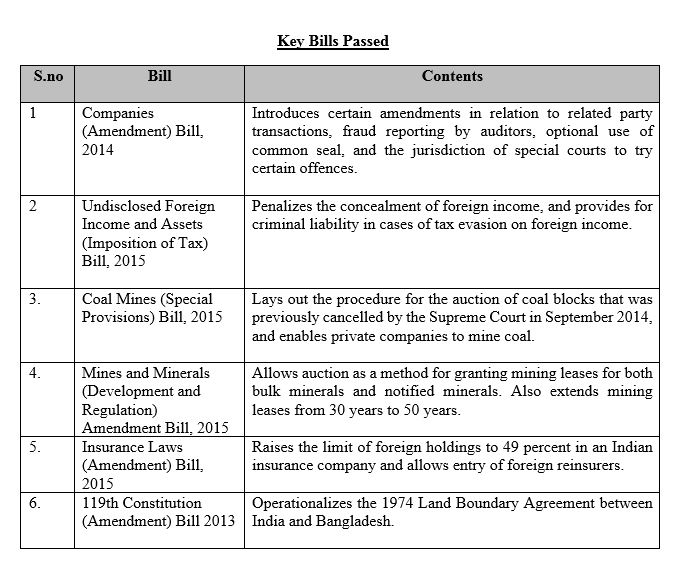 The second budget session of the National Democratic Alliance (NDA) government concluded on May 13, with productivity levels reaching a 15-year high. The Parliament passed 24 bills, the highest number of bills passed during a session in the last five years.

However, despite the high overall productivity, Parliament witnessed disruptions on contentious issues such as farmer suicides, a cancelled food processing project in Rahul Gandhi’s constituency and a controversial audit report on renewable energy financing. Of particular importance, the government could not get the support in the upper house to pass two of its most important bills – the Land Acquisition Bill and the Goods and Services Tax (GST) Bill – and they were directed back to their respective committees. The Modi government will need the GST Bill to be passed in the upper house in the upcoming session in order to stay on track for its scheduled rollout in April of next year. By simplifying the tax regime, it is estimated that the GST could add 1.5 percentage points to economic growth. The Land Acquisition Bill has been referred to a joint committee of the parliament with members from both houses, setting the stage for its passage in an upcoming Monsoon session. The opposition’s attack on the Land Acquisition Bill forced the NDA government to be on the defensive for probably the first time. The bill provided an opportunity for the opposition parties, including the Indian National Congress, to characterize the Modi administration as being “anti-poor”.

Another important piece of legislation that failed to pass was the Real Estate (Regulation and Development) Bill, aimed at regulating   transactions between buyers and promoters of residential real estate projects.

The opposition also prevented the Motion of Thanks for the President’s Address from passing in the Rajya Sabha. The Communist Party of India (Marxist) had attached an amendment that would have expressed regret that the government had not taken any steps to curb corruption or “black” money.

The Monsoon session beginning in the first week of August will be the next test of the Modi government’s commitment to its reform agenda.  Whether or not the Modi government is willing to expend further political capital to pass key reforms, such as the Land Acquisition Bill and the GST Bill, is uncertain.