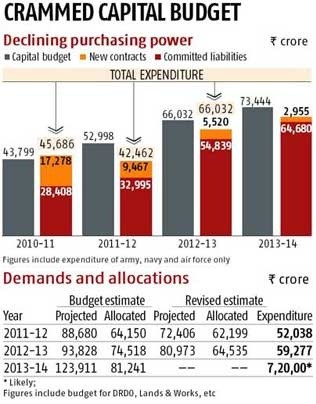 According to the Stockholm International Peace Research Institute (SIPRI), India overtook China as the world’s biggest defense sector importer in 2010. By 2013, total arms deliveries to India (against total contracts signed) reached $5.9 billion. About half of India’s $13.4 billion budget for equipment modernization was spent on imports of foreign weaponry. In another recently released report by IHS, India jumped 23 places in a year to become the United States’ largest defense market, with deals totaling $1.80 billion in 2013 and expected to rise to $3.4 billion by 2015.

Despite these numbers pointing towards healthy and forward looking defense procurement and acquisition processes, the domestic reality in India is starkly different. The Indian Army has not purchased any artillery guns since the Bofors scandal in 1987, and it faces a critical shortage of anti-tank weapons.  The Indian Air Force (IAF) is short of modern fighter jets and the Indian Navy has not added any new submarines in 15 years. Indian media, defense experts and commentators blame these shortcomings on time-cost overruns, corruption, cumbersome procedures, unclear national security considerations and inordinate bureaucratic delays. Over the last few months, a number of arbitrary cancellations, blacklisting of suppliers and delays in defense acquisitions have exacerbated the concerns about the need for modern weapons to protect India’s national security.

One of the most worrying trends that has emerged is a growing crisis of available funds. India’s economy grew just 4.7 percent in 2013. This slow growth, when combined with the depreciating rupee, leaves limited funds available for defense modernization. In addition, the ratio of capital expenditures (investments in new aircraft, ships, tanks, etc.) to revenue expenses (salaries, pensions and consumables) has been decreasing, particularly in the Army, which now spends less than 20 percent of its budget on capital expenditures.

Consequently, a number of significant negotiations with foreign suppliers have been allowed to drag on. Each year’s capital budget ends up being spent almost entirely on the previous years’ purchases. To put this in perspective, only $477 million of the military budget of over $1.18 billion was available for new purchases in 2013. The share of pre-committed installments has risen each year. The urge to spend the capital budget before the end of a financial year (when the unspent amount by the Ministries has to be surrendered) has led to ad hoc decision-making, and has resulted in a jagged approach to acquisition, without sufficient regard for either long-term impact or immediate needs.

Several key weapons acquisition deals have been stalled for lack of funds. Some of the important ones include:

1.  The purchase of 145 M777 light howitzers from BAE Systems for a mountain strike corps in the Himalayan border region has been put on hold. Without any orders, BAE has stopped its M777 lines in the US and UK. The cost of the contract has risen to $885 million, leaving the fate of this acquisition in question

2. The contracts with Boeing for 22 AH-64 Apache and 12 CH-47F Chinook helicopters, worth $2 billion, are stuck in the pipeline. Along with this a contract worth $1 billion for 4 Boeing P-8I maritime surveillance aircraft (eight have already been bought) is stalled. The purchase of 10 Boeing C-17 Globemaster III transport aircraft, worth $4 billion and Honeywell engines worth $3 billion for the IAF’s Jaguar fighters will also be delayed.

3. The contract for 126 Rafale medium multi-role combat aircrafts will require the IAF to spend $2.4 million merely as the signing amount. There are reports that the estimated price band of $16-20 billion may escalate even further, which would make it almost impossible for the military to complete the deal as envisaged  However, a recently announced work-share agreement between Indian defense parastatal Hindustan Aeronautics Ltd. (HAL) and the French manufacturer Dassault provides that the first 18 fighters will be produced in France and delivered to India in “fly-away” with HAL doing 70% of the work on the remaining 108 planes that will be manufactured in India.

Another worrying aspect of Indian defense budgeting is that the military’s long-term planning is based on fundamentally inconsistent fiscal assumptions. Important planning documents, such as the Long-Term Integrated Perspective Plan and the Five-Year Procurement Plan, have outlined the purchase of equipment worth millions of dollars without any funds available. The capital budgets have largely remained stagnant, even though a number of deals have been finalized. These committed liabilities eat into each year’s budget and leave little money for new acquisitions.

Both the Bharatiya Janta Party (BJP) and the Indian National Congress (INC), the two major national political parties in India, are in favor of military modernization. However, the current Congress-led government has only allocated 2 percent of the GDP for defense purposes. The BJP, despite its stubborn opposition to FDI in several important sectors, has said that it will encourage FDI in defense and work towards greater indigenization of the defense sector if it comes to power in the general elections in April-May 2014.

Indigenization of defense production has been an objective of the current government for over five years now, but efforts in this direction have fallen short.  The large Defense Public Sector Undertakings, such as HAL and Bharat Heavy Electricals Ltd. (BHEL) and the Defense Research and Development Organisation (DRDO) have fallen short for a variety of reasons, owing to inefficiencies and lack of in-house technological knowledge.

The Indian private sector has remained largely on the sidelines.  The way forward, most military analysts conclude, lies with transfer of technology and co-development and co-production of defense systems in India.  However, the current FDI limit of 26 percent is not sufficient to induce foreign original equipment manufacturers to share their proprietary technologies and invest in India. The United States, while offering India a number of proposals for co-development and co-production under its Defense Trade Initiative (DTI) launched by former Deputy Secretary of Defense Ashton Carter in 2012, has encouraged India to raise the across-the-board FDI limit in the defense sector to 49% to attract U.S. defense companies to more fully participate in India’s defense modernization efforts.*

According to the DRDO, India’s defense system requirements will be worth $150 billion in the next five years, with up to $100 billion of this total demand met by Indian companies. The Indian industry has for long been constrained by lack of coordination and innovation in R&D, with many DRDO initiatives having incurred lengthy delays. In February Minister of Defense A.K. Antony was compelled to detail to Parliament delays in six significant projects. These included the Light Combat Aircraft, Tejas, which was supposed to have been ready by 2008 and is now anticipated to be ready by December 2015; the Kaveri aircraft engine, originally scheduled for 1996 but still the subject of extensions and cost overruns; the Long Range Surface-to-Air Missile (LR-SAM) project, originally due in May 2011 but now scheduled for completion in December 2015; and the Air-to-Air Missile ‘Astra,’ now scheduled for completion in December 2016 instead of August 2012.

Notwithstanding this checkered record, the much-talked about 30 percent indigenous content requirement has been gaining momentum. The narrative that came out of the Defence Expo recently held in New Delhi was that collaborations between the government and its DPSUs, foreign manufacturers and, increasingly, private Indian companies will be the way forward. India changed its procurement rules in 2013 to comply with the United Nations Arms Trade Treaty. Many analysts believed that this could limit imports of weapons and put foreign firms under stricter scrutiny. Although the new rules favor the state-run defense industry, it is predicted that domestic private companies will aggressively compete for defense deals by partnering with foreign firms.

Despite the unsatisfactory state of progress in opening up the defense sector, many international firms have shown confidence that the situation will improve and they will be able to enter into deals that will be mutually beneficial. This is evidenced by the fact that BAE Systems has recently offered assistance in the modernization effort of ordnance factories that manufacture weaponry, ammunition and equipment for the Indian defense forces.

It is clear that the problems with defense planning and procurement are manifold. There is an immediate need to stabilize the fiscal deficit and keep it below 4.8 percent of the GDP. This number will be hard to achieve, especially given the political considerations that make cutting down on subsidies difficult. The government should recognize that defense modernization should not be considered for easy cuts in funding but that efficiency and savings can help. A move in the right direction is the interim defense budget, which proposes a 10 percent increase in defense spending for 2014-15. However, the budget puts a damper on new weapons procurement by increasing it only by 3.28 percent compared to 9 percent last year.

The interim budget will govern defense spending only for four more months and will change when the new government is elected following the general elections in May. Minister of Defense Antony has repeatedly articulated that the defense funding for the year has been exhausted and no new deals will be finalized until the next government proposes its budgetary allocation. The future of defense buying and projects that have been in the pipeline over the last five years will have to wait till later this year.

* Although the DTI was endorsed by the Indian government during the September 2013 visit to Washington of Prime Minister Singh, India has yet to identify a project for co-development and co-production from an ample menu of substantive offerings – including the Javelin anti-tank missile – presented by Mr. Carter.  This initiative, too, would appear to fall to the next government in New Delhi for action.

Figure from the Hindu Business Line.