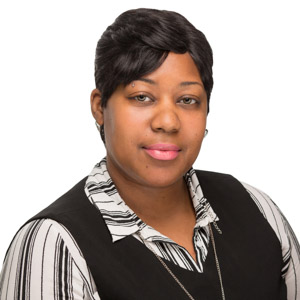 Jasmine Battle is an Executive Assistant at ASG, where she supports the Africa practice and assists on numerous projects across the firm. Ms. Battle has over a decade of experience working with and supporting executives.

Prior to joining ASG, Ms. Battle was a Legal Secretary at DLA Piper, where she assisted in the firm’s Transactional Real Estate and Trademark practices. In this role, she supported private sector clients in the area of mergers and acquisitions.  She also served as a Legal Secretary at Weiner Brodsky Kider PC, where she supported partners and associates working on real estate transactions.

Before that, Ms. Battle held temporary legal staffing positions at The Carlyle Group, Thomson Reuters, Lockheed Martin, and Ullico, Inc. From 2007 to 2009, she also assisted the Vice President of Tax and Benefits at Fannie Mae. Ms. Battle began her career as an Administrative Assistant with the National Research Council, before becoming a Legal Secretary in the Office of the General Counsel at the National Academy of Sciences.

Ms. Battle is based in Washington, D.C.