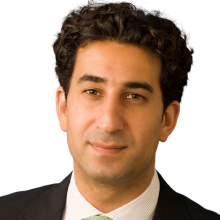 Karim Sadjadpour is a Senior Advisor with the Middle East & North Africa practice at ASG, where he advises clients on business and investment strategies in the region, particularly as they relate to Iran and the Gulf.

Mr. Sadjadpour is a Senior Fellow at the Carnegie Endowment for International Peace, and a leading expert on Iran, the Gulf, and U.S. policy toward the Middle East. He was previously an Analyst with the International Crisis Group, splitting time between Tehran and Washington.

A contributing writer at The Atlantic, Mr. Sadjadpour has also written for outlets including The New York Times, The Washington Post, The Economist, and Foreign Policy. He is a frequent guest on NPR, CNN, and PBS, and testifies often before Congress.

He is an adjunct professor at Georgetown University’s School of Foreign Service, where he teaches about U.S. foreign policy and the Middle East.

Mr. Sadjadpour received an M.A. in International Relations and Affairs from the Johns Hopkins School of Advanced International Studies, and a B.A. from the University of Michigan. He speaks Persian, Italian, and Spanish, and is proficient in Arabic.