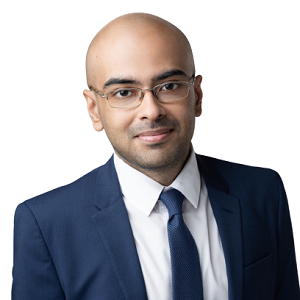 Nikhil Sud is a Senior Regulatory Affairs Specialist with ASG’s South Asia practice, where he draws on his expertise in regulatory law to advise clients on regulatory, legal, and policy issues across the region and around the world, helping them develop strategies for both short-term and long-term growth.

Before joining ASG, Mr. Sud was an attorney at a global law firm in Washington, D.C., where his practice focused on advising Google on legal and policy issues relating to competition law matters, including investigations by regulatory agencies, in multiple jurisdictions including India, the U.S., and Europe. Additionally, Mr. Sud advised clients in various industries, including pharmaceutical firms and media companies, on a variety of regulatory issues such as antitrust, intellectual property, the Foreign Corrupt Practices Act (FCPA), and the False Claims Act. Additionally, Mr. Sud has written on data protection issues, non-personal data, censorship, competition, policymaking more generally, and FCPA compliance in India, and contributed regularly to the American Bar Association’s Intellectual Property Committee Tidbits Bulletin, examining developments at the intersection of antitrust and intellectual property internationally.

Mr. Sud is admitted to the bar in Washington, D.C and Massachusetts. He is proficient in Hindi.