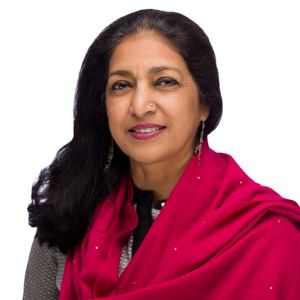 Ranjana Smetacek is a Senior Advisor at ASG, where she draws on more than two decades of experience with global and Indian companies to assist clients. Ms. Smetacek works most closely with the firm's South Asia and Global Health Solutions practices, along with the Health and Life Sciences team.

Previously, Ms. Smetacek was the Director General of the Organization of Pharmaceutical Producers of India (OPPI). In this role, she helped establish a strong relationship between OPPI and key government stakeholders, increased OPPI’s voice in the press, and helped align its objectives with those of the global health and life industry. Earlier, Ms. Smetacek served as the Director of Marketing and Corporate Communications for Fortis Healthcare in New Delhi, where she managed the communications challenges of a rapidly growing hospital network.

Ms. Smetacek led Monsanto’s government and public affairs efforts in South Asia, where she was based primarily out of India, for a decade before being promoted to support Monsanto’s growth in Australia, China, and across Asia. Ms. Smetacek also worked in Monsanto's St. Louis headquarters as Director of Global Biotech Acceptance. In this role, she supported projects in Africa, Europe, and South America.