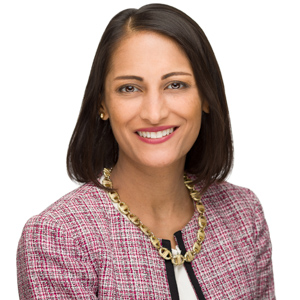 Sumona Guha is a Vice President at ASG, where she draws on twenty years of experience in Europe and South Asia to advise clients on market entry and expansion, including political and regulatory strategies.

Prior to joining ASG, Ms. Guha was Senior Director at the U.S.-India Business Council (USIBC), where she focused on infrastructure, energy, and manufacturing, and launched an Indo-Pacific initiative to promote economic connectivity across the region.

Ms. Guha is also a former U.S. Foreign Service Officer. At the U.S. Department of State, Ms. Guha spent four years on the Secretary of State’s Policy Planning Staff with responsibility for South Asia. She was also a Senior Advisor and Deputy Director for Afghanistan Affairs in the Office of the Special Representative for Afghanistan and Pakistan. Earlier in her career, Ms. Guha served in the White House as Special Advisor for National Security Affairs in the Office of the Vice President. She spent a year as a Pearson Foreign Affairs Fellow in the U.S. Senate.

Ms. Guha is a Non-Resident Fellow at the German Marshall Fund. She has published and conducted interviews in multiple media outlets.

Ms. Guha received an M.A. in Public Policy from Georgetown University and a B.A. in Economics and Psychology from Johns Hopkins University. She speaks Bengali, French, and Russian.