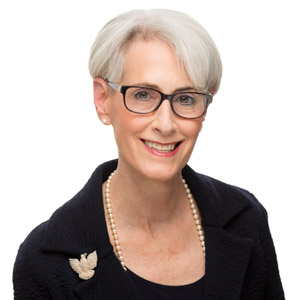 Wendy R. Sherman is a Senior Counselor at ASG, where she brings decades of experience in business, government, international affairs, and politics to help ASG clients gain understanding of geopolitical developments, navigate international markets, and constructively address policy challenges around the world.

Ambassador Sherman rejoined ASG after her distinguished service as Undersecretary of State for Political Affairs at the U.S. Department of State. In this global role, she oversaw the bureaus for Africa, East Asia and the Pacific, Europe and Eurasia, the Near East, South and Central Asia, the Western Hemisphere, and International Organizations. She also led the U.S. negotiating team and was a central player in reaching a successful conclusion of the Iran nuclear agreement. In recognition of her diplomatic accomplishments, she was awarded the National Security Medal by President Barack Obama.

Prior to her most recent service at the State Department, Ambassador Sherman was Vice Chair of ASG, having helped to found and grow the firm for a decade.

Ambassador Sherman previously served as Counselor for the State Department (1997-2001), as well as Special Advisor to President Clinton and Policy Coordinator on North Korea. In that role, she worked as a close advisor to then Secretary of State Madeleine Albright on every major foreign policy and national security issue, and also managed numerous special assignments including negotiations on nuclear non-proliferation.

From 1993–1996, Ambassador Sherman served as Assistant Secretary for Legislative Affairs under Secretary of State Warren Christopher. Earlier in her career, she managed Senator Barbara Mikulski's first successful campaign for the U.S. Senate and served as Director of EMILY’s List.

Ambassador Sherman is also a professor of the practice of public leadership at the John F. Kennedy School of Government at Harvard University and director of the school's Center for Public Leadership. She is also a Senior Fellow at the school’s Belfer Center for Science and International Affairs. She is a member of the President’s Intelligence Advisory Board, the Council on Foreign Relations, the Aspen Strategy Group, and the American Academy of Diplomacy.

Ambassador Sherman served as Chair of the Board of Directors of Oxfam America and was also on the U.S. Department of Defense’s Defense Policy Board, a group tasked with providing the Secretary of Defense with independent, informed advice and opinion, concerning matters of defense policy. In 2008, she was appointed by Congressional Leadership to serve on the Commission on the Prevention of Weapons of Mass Destruction, Proliferation, and Terrorism.