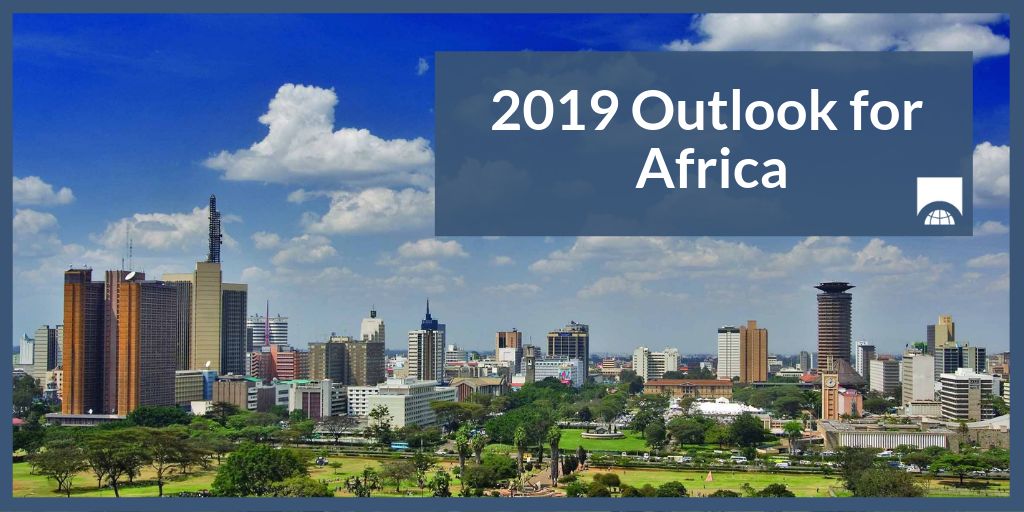 Once again, Africa ended 2018 as home to half of the world’s 10 fastest growing economies. According to the World Bank, Africa as a region grew at an average rate of just 2.7 percent in 2018, a slight increase from 2.6 percent in 2017. Economic progress across the region was led by Ethiopia, Côte d’Ivoire, and Rwanda, where growth rates in 2018 were at 7.7 percent, 7.5 percent, and 7.2 percent, respectively. A slew of other countries also benefited from continued high growth above five percent including Ghana, Senegal, Guinea, Tanzania, Madagascar, Uganda, and Kenya.

Overall, the continent continued to move forward by improving its infrastructure, increasing the use of digital technology, upgrading its business and investment climate, diversifying its economies, and expanding opportunities for girls and women – all of which will contribute to more progress in the future. However, the continent still faces major fiscal challenges.  Its debt to GDP ratio averaged 55.5 percent in 2018, up from 52.8 percent in 2017. Moreover, insecurity and conflict beset several countries, while corruption, climate change, bureaucratic inefficiencies, and unmet demands for jobs by a growing population continue to challenge the entire continent.

Looking ahead, resurging commodity prices, improved macroeconomic policies, and progressive reforms bode well for the region in 2019. In 2019, Ethiopia is expected to continue to top the list of the continent’s fastest growing economies with 8.8 percent growth. Coming in a close second will be Rwanda at 7.8 percent, and both Côte d’Ivoire and Ghana are projected to grow at 7.3 percent.

Despite Nigeria’s marginal return to growth these past two years under the economic leadership of Vice President Yemi Osinbajo, results are still mixed, and much will depend on the outcome of the country’s February elections. South Africa is expected to recover from its brief technical recession in 2018 and see a marginal improvement of its economy by 1.3 percent in 2019.

Other key markets to watch in 2019 include Kenya, which is expected to continue to solidify its status as East Africa’s economic powerhouse with a steady performance of 5.8 percent growth; Angola, where analysts predict a turnaround from -1.8 percent growth in 2018 to 2.9 percent in 2019; and Uganda, which has made significant strides in energy production and distribution as well as infrastructure development and will grow by six percent.

In 2018, African countries showed a renewed desire to put forward “African solutions to African problems.” Under the proactive leadership of the African Union Commission Chairperson Moussa Faki Mahamat and Chairman Rwandan President Paul Kagame, the regional body spurred a number of important decisions, most notably committing to taking on a higher share of fiscal responsibility in regional peacekeeping efforts and the adoption of the African Continental Free Trade Area (AfCFTA). If implemented, the AfCFTA would create the largest free trade area in the world, encompassing 1.2 billion people and a combined Gross Domestic Product (GDP) of $2.5 trillion.

Designed to foster intra-Africa trade, eliminate tariffs, and boost employment continent-wide, the AfCTA has been ratified by 18 nations but will need four additional countries to ratify the trade deal in order to reach the 22 required for implementation. Most of Africa’s major economic players have signed on, except Nigeria, though Nigeria watchers suspect the country will sign off following its upcoming presidential election in February.

Stronger regional integration may also help African states to capitalize on its bulging youth population, which is expected to double to over 850 million by 2050. While this large youth bulge creates serious challenges, it also presents potential opportunities for investors in housing, education, and consumer goods.

Ethiopia and Angola lead reforms in 2018

In 2018, Ethiopia and Angola, two of sub-Saharan Africa’s top four largest economies, enacted major reforms with significant economic implications. In Ethiopia, the surprise resignation of Hailemariam Desalegn as prime minister due to public pressure was a first in the country’s history, and developments since then have been largely positive. His replacement, Prime Minister Abiy Ahmed, came to power promising to implement sweeping reforms designed to fundamentally change the country’s political and economic landscape. Abiy’s rapprochement with Eritrea could be key to unlocking the Horn of Africa’s economic potential. But despite how fast he has been able to implement reforms, Abiy still faces stiff internal challenges from remnants of the old establishment. To maintain momentum, Abiy will have to tackle complex privatization efforts carefully, manage rising expectation of a population buoyed by changes, and attract outside investment, especially in banking, finance, and insurance.

Angola continued making strides in 2018 following the transition from the 38-year rule of Eduardo Dos Santos. Elected president of Angola in 2017, João Lourenço consolidated his power in 2018 by replacing his predecessor as the head of the ruling party, a post which allowed Dos Santos to maintain political control. This major development has given Lourenço greater leverage to implement major reforms to combat corruption and revive the economy. Under Lourenço’s leadership, the Angolan government has taken considerable steps to achieve fiscal consolidation and currency stabilization, which are expected to continue in 2019. Other surprising moves include the arrest of Dos Santos’ son for fraud as well as significant regulatory changes to improve the business climate, diversify the economy, and strengthen the management of the all-important oil sector.

DRC: A massive opportunity for Africa’s sleeping giant to wake up

The most anticipated elections in 2018 were held in mineral-rich Democratic Republic of the Congo (DRC). DRC is sub-Saharan Africa’s largest country by land mass, with direct links to central, eastern, and southern Africa through its nine bordering neighbors, abundant natural resources, and the human capital of some 90 million citizens. Election results announced in January 2019 saw the defeat of President Kabila’s hand-picked successor and the contested victory of opposition figure, Felix Tshisekedi, over Martin Fayulu, another leading opposition candidate.

Observers believe that Tshisekedi’s victory is the result of a deal he made with departing President Kabila and that Fayulu is the legitimate winner. However, the constitutional court validated Tshisekedi’s victory and the African Union, as well as other regional bodies, accepted its decision. A peaceful transition of power in the DRC would help put the country on the path to stronger economic relevance on the continent but whether the new government will be able to boost investors’ confidence remains to be seen.

Africa is gearing up for a number of key elections in 2019. Nigeria and South Africa are sure to dominate headlines this year as both will hold pivotal presidential elections, the results of which will have a significant impact across the region.

Nigeria’s presidential election, slated for February 16, is expected to be a two-horse race between established members of the country’s political class. The current All Progressives Congress (APC) government, led by President Muhammadu Buhari, is seeking re-election on the promise of continuity. The opposition PDP, still bruised by its crushing defeat in 2015, has chosen former Vice President Atiku Abubakar as its nominee and is seeking to return to power on a slightly more pro-business and pro-urban platform that it promises will accelerate growth.

There are high expectations for Nigeria’s Independent National Electoral Commission to build on the legacy of 2015 and deliver a credible election, but the Commission is heading into the polls with fewer resources, a greater threat of political interference, and less experienced leadership than in 2015. International scrutiny, which played a positive role in 2015, could be less relevant this year due to the current U.S. administration’s decreased focus on Africa, and the UK’s preoccupation with Brexit. Whoever wins the presidency will have to focus on accelerating Nigeria’s economic growth and job creation while dealing with the country’s on-going security challenges, its high levels of corruption, and its poor service delivery.

In South Africa, elections are expected to take place in April or May. Once again, the African National Congress (ANC) under incumbent President Cyril Ramaphosa is expected to win. Expectations are high that the affirmation and legitimization of Ramaphosa’s position through these elections will put the country back on a positive economic path after almost a decade of economic decline under the corrupt and scandal-ridden former president, Jacob Zuma. Fighting corruption, a key issue in the elections, has emerged as the one of Ramaphosa’s top three priorities for regaining public and investor confidence. If Ramaphosa wins, he will likely nominate a smaller and more politically coherent cabinet than his predecessor. He will also have to navigate the tricky waters of land redistribution, an issue that is important to young black South Africans desiring change. Potential investors should closely follow developments on how this is implemented.

In another important election this year, Senegal’s President Macky Sall is running for a second term in February. He will head into the election benefitting from the country’s strong economic performance, but Sall is facing criticism that he is growing increasingly autocratic and attempting to stamp out opposition, including by pushing through a law that civil society activists say will make it harder for opponents to enter the presidential race.

In Kenya, President Uhuru Kenyatta is focused on growing his country’s economy and consolidating his legacy as prepares to transition out of office in two years. This year, Kenyatta’s administration will look to address terrorism and other security threats to ensure a stable environment for investors. The success of the current administration’s anti-corruption drive could be key to unlocking the significant opportunities brought by the recent discovery of major oil reserves.

Côte d’Ivoire may be heading towards a tense 2019 as President Alassane Ouattara reportedly intends to run for a third term amidst a political rift with his former ally, Henry Konan Bédié, who served as president in 1995. The potential return of former leader Laurent Gbagbo, who was acquitted by the International Criminal Court of crimes against humanity in January, could further complicate 2020 elections, though for now Gbagbo remains in custody while appeals of his acquittal are considered. Nevertheless, the country’s economic revival under Ouattara following a turbulent period has been impressive, and this year again it is sure to be a leading economic force in West Africa.

Meanwhile, in Uganda, a challenge to a 2018 law abolishing presidential age limits, which could extend President Yoweri Museveni’s grip on power indefinitely, has led to tension between the country’s aging ruling class and a younger opposition gaining momentum. This issue reflects a broader generational divide within the country’s political structure, which has turned the administration’s focus away from Uganda’s most pressing social issues, including healthcare and education.

Following his 2018 election to replace long-standing Robert Mugabe as president of Zimbabwe, Emmerson Mnangagwa promised a series of reforms to attract foreign investment. The excitement and hope following the ousting of Mugabe has been replaced by anger and desperation, and investors continue to be wary as the country’s economic situation worsens. Shortages of critical goods and mass protests against extreme price hikes in fuel have further crippled the country. The Zimbabwean government replied to demonstrations by shutting down the Internet and has been criticized for its heavy-handed response.

A long-term investment strategy continues to be important in most African markets. In 2019, investors should keep an eye on the outcome of elections in South Africa and Nigeria and look for opportunities to benefit from the wave of investor-friendly reforms in Ethiopia and Angola. South Africa is poised to restore the market’s confidence in its economy and regain its place as one of sub-Saharan Africa’s political powerhouses, while Nigeria’s economy is likely to persistently yet slowly recover.

Meanwhile, Côte d’Ivoire, Ghana, and Kenya offer greater political stability for investors with further potential for continued growth. The DRC may offer the biggest greenfield opportunity, but it’s too soon to tell whether recent elections will create the political will necessary to secure the country and ensure an investor-friendly business environment.