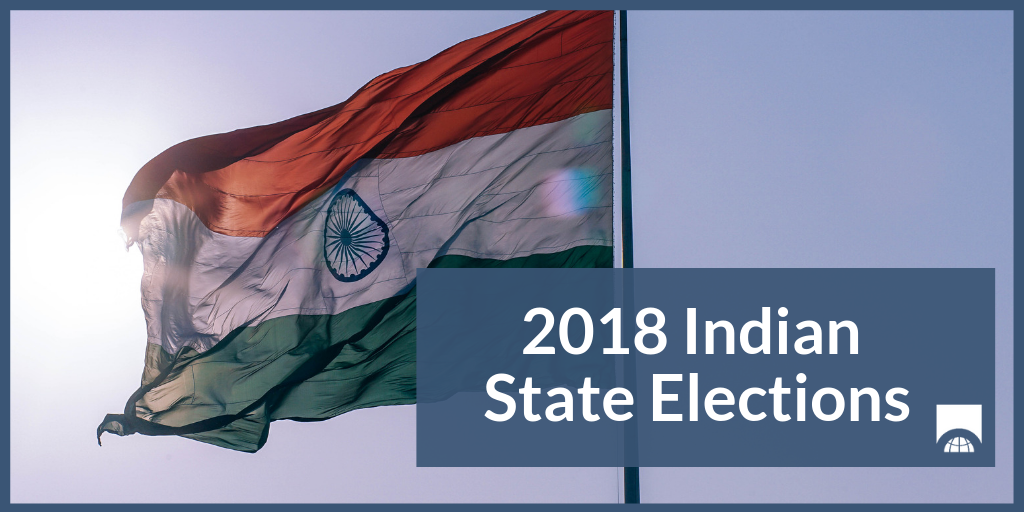 Why were these Elections Crucial?

Three states of the ‘Hindi-Heartland’ went to election

The ‘Hindi Heartland,’ comprised of Bihar, Chhattisgarh, Gujarat, Jharkhand, MP, Maharashtra, Rajasthan, and Uttar Pradesh, is critical to the Indian political landscape. These eight states account for over 75 percent of the BJP’s seats in parliament and are considered to be the ruling party’s political bastion. While the BJP has continued to expand its presence in southern and eastern states, its chances of remaining in power rest upon its performance in this region.

There have been indications of growing discontent among the population over the performance of Mr. Modi’s government. Key issues include weakness in the rural economy and the distress faced by India’s farmers; lack of employment opportunities in the market despite strong economic growth; and headwinds faced by the middle class – the BJP’s core voter group – due to such measures as withdrawal of currency notes (demonetization) and the rollout of the Goods and Services Tax (GST). The state elections served as a litmus test for the depth of this discontent and its potential impact on the BJP’s electoral prospects in 2019.

Since coming to power in 2014 with a historic mandate, Mr. Modi has been actively working towards securing a second term in 2019. Mainstream media dubbed these elections as the semi-finals, and analysts agreed that momentum built by parties now would play a key role in the 2019 national elections. The fact that the elections were held in traditional BJP strongholds with a combined population of over 200 million made them even more important.

Test for the relevance of the opposition

The INC’s claim to be the leading opposition party was also tested in these elections. Since 2014, Mr. Modi has consistently expanded his party’s footprint across India, while the INC consistently lost ground to the BJP. The opposition, including regional parties and the INC, has made efforts in recent months to put differences aside and stitch a grand coalition against the BJP. These elections were a test on the effectiveness of the INC to lead this opposition coalition.

What is the Verdict?

What are the Implications for 2019?

While the results are a setback for Mr. Modi and the BJP, they are not a decisive indicator for 2019. Historically speaking, voter preferences vary between state and national elections, and the latter are contested on a whole host of national issues that are left unaddressed during state elections. However, it is worth noting that these results indicate a major shift in the current political landscape, where the BJP is facing headwinds for the first time since Mr. Modi was elected to power in 2014.

A break in the BJP’s dominance

The results are a setback for the ruling BJP in India, which has dominated elections over the last four years. The loss in these elections is expected to force the party to reevaluate its electoral strategy for the upcoming national elections. Some analysts have indicated that the anti-incumbency vote played a significant role in these elections and that this factor will not apply in the 2019 general elections.

Furthermore, Mr. Modi continues to be the most popular politician in India. Several experts have opined that the BJP minimized its losses in Rajasthan and MP due to Mr. Modi’s popularity.

These results are a certain comeback for the INC and clear evidence that it remains a force to be reckoned with. INC, however, was unable to win decisive mandates and needs to build on this victory towards 2019. The sound victories of the TRS in Telangana and the MNF in Mizoram indicates that regional parties remain relevant in India’s elections. The INC will need to unify and rally these parties, play a key role in resolving internal differences, and outline a common shared vision for the proposed grand coalition to challenge the BJP in the upcoming national elections.

Government focused on winning votes ahead of elections

The government is expected to announce several populist economic measures in the coming months in a bid to win over voters, particularly farmers hit hard by agrarian distress. The focus will solely be on new social welfare programs and successful roll-out of current programs, such as the proposed health insurance coverage for all Indian citizens announced earlier this year.

Volatile months for the economy and status quo for businesses

Businesses should not expect any major reforms or policy measures in the coming months. The government is expected to exceed fiscal spending targets, as it seeks to fund the expanded social welfare programs. It may also seek to pressure the central bank for a looser monetary policy, to bolster near-term economic growth, in favor of stability. The central bank is likely to comply following the appointment of Shaktikanta Das, a former economic affairs secretary who has served under Mr. Modi, as Governor of India’s central bank. His appointment comes in the wake of Urjit Patel’s surprise resignation as Governor, amidst reports of drift with the government.