President Donald Trump will host Vietnamese Prime Minister Nguyễn Xuân Phúc on May 31. Phúc’s visit comes roughly one year after he assumed the prime minister post following a bruising leadership struggle within the Communist Party of Vietnam. The visit will be a litmus test for not only Hanoi but also other regional leaders, as it is the first by a Southeast Asian leader under the new U.S. administration.

1. What does Trump want to come out of this visit? Trump is looking to discuss the bilateral trade deficit. Bilateral trade has grown 100-fold since the normalization of relations in 1995 and the U.S. is Vietnam’s largest export market. Vietnam has a $30 billion annual trade surplus with the U.S., making the U.S. deficit with Vietnam the sixth largest after China, Japan, Germany, Mexico, and Ireland. The White House cited Vietnam among the 16 countries of special concern when Trump issued his March 30 executive order requesting a report on the causes of the U.S. trade imbalance and Trump singled out Vietnam for stealing U.S. jobs and wealth on the campaign trail. 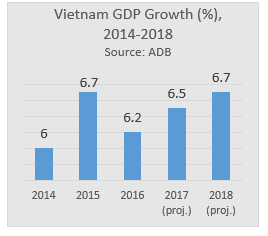 2. What’s on Phúc’s agenda for this meeting? Vietnam is eager to attract higher levels of U.S. foreign direct investment (FDI), particularly in manufacturing, innovation, and education. The Vietnamese economy is projected to reach 6.5 percent growth in 2017, slightly under the government’s target of 6.7 percent. But the economy is particularly reliant on trade, and a strong shift on the part of the U.S. towards protectionism would do substantial harm to Vietnam’s economic prospects, as would weaker export demand from China. Foreign investment, which grew by 11.9 percent last year, is expected to boost manufacturing and exports.

3. Without TPP, what is the future of U.S.-Vietnam trade? Hanoi worked closely with the Obama administration to substantially expand bilateral ties as a counter to China’s growing strategic and economic weight in the region, betting heavily on the U.S.-led Trans-Pacific Partnership (TPP) and working closely with the U.S. to champion a united and strong front in the Association of Southeast Asian Nations (ASEAN) on the South China Sea. Trump’s withdrawal of the U.S. from TPP was a heavy blow to Vietnam, which views TPP as an important means to anchor U.S. economic engagement in the region, further domestic economic reforms, and reduce economic dependence on China. Absent TPP, the relationship has been left without a guiding economic framework. Given the Trump administration’s stated preference for bilateral deals, Phúc may suggest launching discussions of a bilateral free trade agreement with hope of securing a level of U.S. market access close to that in TPP. The two countries could use the agreements reached in TPP as a starting point, particularly since Hanoi offered substantial concessions on labor and environment.

4. How will the U.S. respond to Vietnam’s security concerns? The Trump administration quieted fears that it would not view the ASEAN region as a priority when Vice President Mike Pence went to Indonesia for a visit to the ASEAN Secretariat and invited ASEAN foreign ministers to Washington to meet with Secretary of State Rex Tillerson in early May. Pence’s announcement that Trump would participate in the APEC meetings in Vietnam and the ASEAN-led East Asia Summit in the Philippines in November came as a relief.

Like many Southeast Asian countries, Vietnam must play a balancing act in its relations with great powers, and strong, active participation in multilateral organization such as ASEAN and APEC has been a key part of Vietnam’s strategy to defend its interests. U.S. engagement in the region, and participation in regional architecture, is a key part of Vietnam’s balancing strategy.

Phúc and Trump could also discuss U.S. defense purchases by Vietnam, particularly command and control systems and maritime domain awareness radar. Obama lifted the export ban on lethal defense articles to Vietnam last year, but no significant purchase of U.S. defense articles has occurred yet, in part because Hanoi is wary of upsetting Beijing.