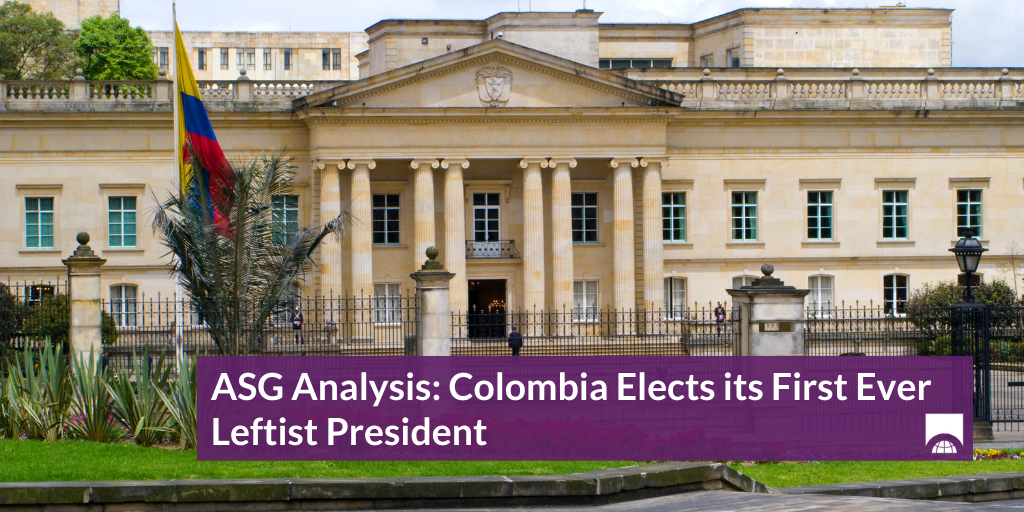 Outlook for businesses in Colombia

ASG expects Petro’s victory to lead to an increase in short-term market volatility and likely disruptions to key government initiatives and personnel as Petro builds his team and develops his governing agenda. On the first day markets opened after the runoff vote, the Colombian peso fell by nearly 5 percent, in a sign of early nervousness in response to his victory. However, the longer-term impact on the business environment of one of Latin America’s most stable investment destinations is less clear.

Petro’s rise during the current electoral cycle after two previous unsuccessful runs for the presidency reflects voters’ growing dissatisfaction with the status quo, particularly following the widespread civil unrest that shook the country in 2021. He centered his campaign on addressing poverty and strengthening environmental protections, though his policy proposals at times lacked specifics and caused alarm among the business community. Petro has also sparked concerns with his combative rhetoric against political opponents and unclear calls for issuing broad “social pardons” for allies charged with corruption and other white-collar crimes.

Still, Petro moderated some of his more confrontational stances toward the business community during the runoff campaign, and brought a number of more centrist, establishment figures into his group of advisors in recent weeks. In his first speech as president-elect, Petro called for a “great national dialogue” to reach consensus on key issues and pledged that his administration would “develop capitalism” in Colombia, seemingly in an attempt to assuage the investor community.