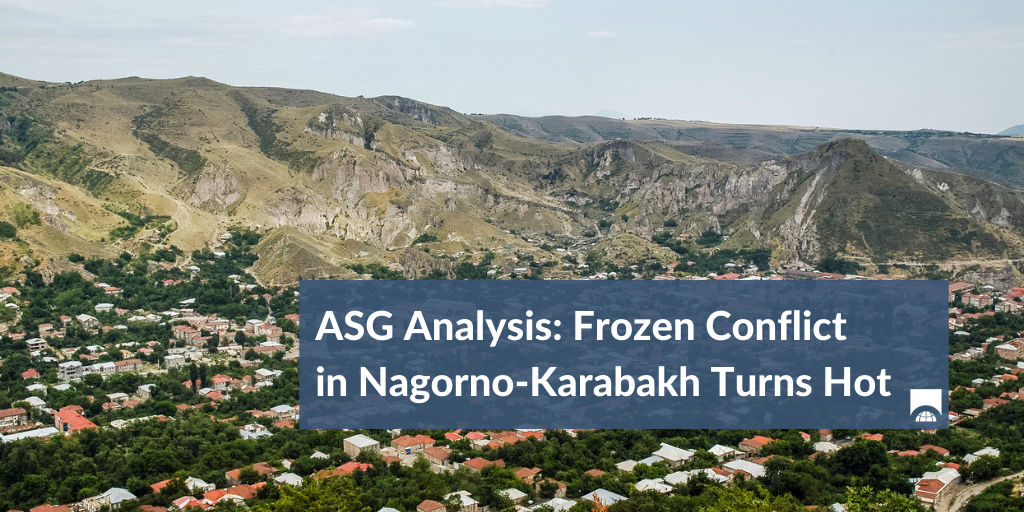 Nagorno-Karabakh is an Armenian-controlled enclave that effectively seceded from Azerbaijan shortly after the Soviet collapse. Armenia has not formally annexed it but provides extensive financial and military support. The existence of the enclave is a legacy of Stalin’s deliberate mixing and matching of ethnic populations across the diverse South Caucasus region during the Soviet period. A ceasefire agreement signed in 1994 has been breached several times, with the worst instance to date coming in August 2016 when an Azerbaijan offensive dealt a humiliating defeat to Yerevan during a four-day war in which 200 people died.

That defeat laid the seeds for the 2018 Velvet Revolution in Armenia in which a long-time leader (and former military commander) was overthrown by a mass opposition movement. Current Prime Minister Nikol Pashinyan, who led the revolution, sparked hopes that the side might resume long-stalled peace negotiations. However, he has largely toed the line of his predecessor. Azerbaijan, meanwhile, has recently been significantly impacted by the Covid-19 pandemic and falling oil prices. Those governance failures have led President Ilham Aliyev to fan the flames of nationalism.

On September 27, Azerbaijan began military operations aimed at retaking territory controlled by Armenia outside Nagorno-Karabakh proper. The fighting is now more severe than at any point since 1994, with official reports listing at least 220 dead and several hundred wounded, including both civilians and military personnel. Both sides have issued misleading reports about the fighting and are portraying their opponents in the worst possible light.

Armenia alleges that Azerbaijan carried out air and artillery attacks targeting civilian populations in Nagorno-Karabakh, whereas Azerbaijan asserts Armenia initiated the fighting by shelling Azeri settlements and military positions. On September 29, both sides began deploying longer-range and more destructive artillery capable of reaching several miles within the territories of both countries. Entering the second week of fighting, missiles have reached Ganja, Azerbaijan’s second largest city, and Stepanakert, the Armenian-controlled capital of Nagorno-Karabakh, hitting residential areas on both sides. There were also unverified reports that Azeri drones were shot down outside the Armenian capital city Yerevan last week. On October 4, President Aliyev stated that Azeri forces were beginning a week-long offensive to retake Nagorno-Karabakh and the surrounding territories controlled by Armenians, and that military action would not cease until Armenia set a timetable for withdrawal from the region.

Turkey is reportedly heavily involved in the conflict on the side of Azerbaijan. French President Emmanuel Macron has called on Turkish President Erdoğan to explain the presence of upwards of 300 Syrian mercenaries in Azerbaijan. Erdoğan has tried to rally Turkish support for Azerbaijani partners, labeling Armenia as “the biggest threat to peace and tranquility in the region.” In line with Aliyev’s statement, Turkey has indicated that it will continue to aid Azerbaijan until Armenia withdraws from Nagorno-Karabakh, increasing the possibility of a broader confrontation. Russia maintains close relations with both countries, has supplied weapons to both sides, and has a treaty obligation to defend Armenia via the Collective Security Treaty Organization (CSTO), a Moscow-led NATO look-alike military alliance. Armenia also hosts a Russian military base and is part of the Russian-led Eurasian Economic Union.

The international community, including the EU, Germany, France, Russia, and U.S. are generally behind the curve in dealing with the conflict. On October 1, the leaders of the U.S., France, and Russia, the countries who lead a largely moribund negotiating forum on the Nagorno-Karabakh conflict called the Organization for Security and Co-operation in Europe (OSCE) Minsk Group, issued a pro forma statement urging an end to the fighting and the restoration of a ceasefire.

A crucial factor in the further escalation of this conflict is the lack of constraints on either side, which have been preparing for war for decades. Thanks to Turkey’s deeper involvement and the lack of serious U.S./European interest, the stage is set for more instability in the region and, potentially, a more active Russian diplomatic role. In theory, the Kremlin is best positioned to push the parties to the conflict to cool tensions, but so far, its efforts have lagged behind its handling of the 2018 flare-up and its offer to convene direct talks has fallen on deaf ears. Armenia has long viewed Moscow as an unreliable ally while Azerbaijan seems eager to capitalize on warmer ties with Turkey.

While there are signs that the situation continues to deteriorate, especially the use of long-range artillery and the spread of the conflict into the territories of both countries, it is still difficult to say how long the fighting will continue and to what extent it will escalate. It will be important to closely monitor the situation to see if it escalates further and/or draws in regional actors more directly. Either scenario has the potential to more directly impact business operations in the region. Due to the long-term nature of the conflict between Armenia and Azerbaijan, even if the two sides find a solution to the immediate crisis and end this short war, both sides will likely immediately begin to prepare for a new one.