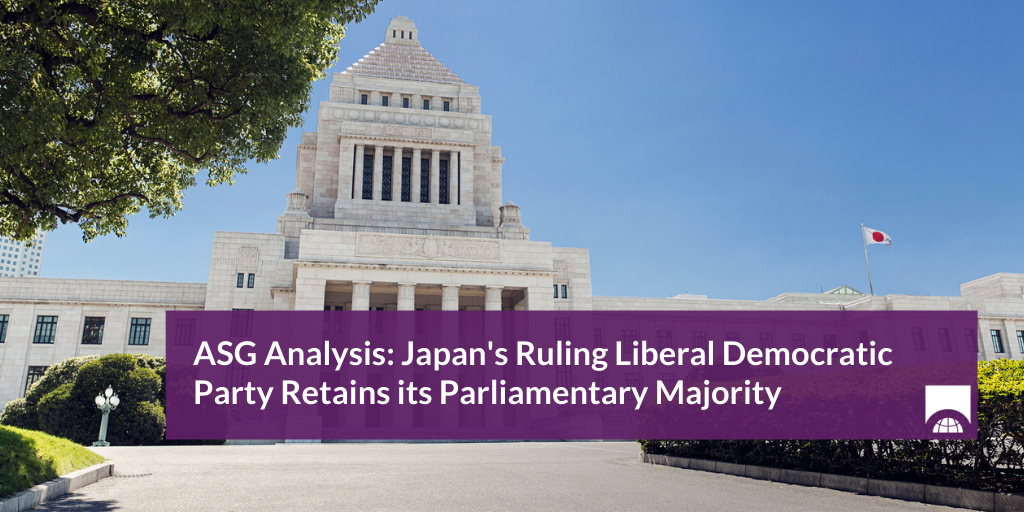 On October 31, Prime Minister Kishida weathered his first major test, leading the LDP to a successful result in the Lower House election. Estimated voter turnout was a relatively low 55.93 percent. The LDP has historically done well in relatively low-turnout elections, including its landslide victory in 2017. Winning 276 seats, the LDP easily exceeded the 233 needed to retain its independent majority. Kishida proved to be a surprisingly deft campaigner, engaging confidently with the media, forming a unity Cabinet, and laying out a serious platform that differentiated him in some respects from his recent predecessors, Yoshihide Suga and Shinzo Abe.

Kishida campaigned on introducing a "New Capitalism" that would better address economic inequities, rather than just boost Japan’s anemic GDP growth, and advocated for a more explicit focus on the need to enhance Japan’s economic security in the face of the challenge posed by China. Notably, Kishida’s emphasis on protecting Japan’s advanced technology and addressing supply chain vulnerabilities as a core element of national security represents a significant shift from Shinzo Abe’s controversial effort to revise Article 9 of Japan’s constitution to remove restrictions on Japan’s military. The ruling party clearly also benefited from a recent dramatic drop in Covid-19 cases after late August’s peak. This enabled the relaxation of emergency restrictions, which was welcomed by a public eager for a return to a more normal life. Kishida himself played a major role in his party’s electoral success. He seemed well-prepared and at ease in his position from day one, and he showed his policy expertise and that he knows his way around the corridors of power. Kishida’s next big test will be the Upper House elections, which are scheduled for July of 2022.

As noted above, Amari’s defeat was perhaps the most notable election glitch for Kishida, and he immediately turned to Foreign Minister Toshimitsu Motegi, to take over as LDP Secretary General. Motegi has also served as minister of economy, trade, and industry; minister of state for economic revitalization; and chairman of the LDP Policy Research Council. He is well known among the public and is one of the most knowledgeable policy experts in the LDP. Motegi is also the acting chairman of the powerful Takeshita faction, and is expected to help Kishida manage his relationships with key internal LDP powerbrokers. Motegi is also very ambitious, and has his eye on becoming prime minister in the future.

Opposition parties underperform, except for the Japan Innovation Party

The opposition bloc, which had disappointing results overall, saw some important shifts in the fortunes of different parties. The main opposition party, the Constitutional Democratic Party of Japan (CDP), won only 96 seats, down from 109 held before the election, leading to the resignation of party leader Yukio Edano. Another important story of the election was the quadrupling of seats (to 41) by the Japan Innovation Party (Ishin), an Osaka-based opposition party which is now Japan’s third-largest party. The Innovation Party is conservative on national security, but with a nuanced, somewhat libertarian policy platform on social and economic issues and a popular public face in Hirofumi Yoshimura, the charismatic Osaka governor. The Japan Innovation Party also has close ties to the LDP, especially with former Prime Minister Abe, who will wield significant influence on the Kishida administration. A small, moderate opposition party, the Democratic Party for the People, saw gains as well. The bottom line is that conservative/moderate parties hold a huge majority in Japan's Diet, and there was no evidence of a shift toward the progressive camp, as the CDP and the Japan Communist Party both lost seats.

Perhaps reflecting general voter dissatisfaction with the political establishment, a number of high-profile members of both the ruling and opposition parties lost their single-seat elections. As noted earlier, Akira Amari’s defeat marked the first time that a sitting LDP secretary general had lost a single-seat election. Ichiro Ozawa, a stalwart member of the CDP, lost his seat in a single-seat election, a surprising result for the veteran politician who had previously served in the leadership of both the LDP and the now-defunct Democratic Party of Japan. Former Construction Minister Kishiro Nakamura, also of the CDP, lost as well. In addition to Amari, senior LDP politicians who lost their single-seat elections included: World Exposition Minister Kenji Wakamiya, former Digital Minister Takuya Hirai, former Minister in charge of the Olympics Yoshitaka Sakurada, and former LDP Secretary General Nobuteru Ishihara.

During his post-election press conference, Kishida announced that he plans to convene a special session of the Diet on November 10, when he will be formally elected again as prime minister. He will also unveil his second Cabinet the same day. He is not expected to make significant changes to the Cabinet line-up he confirmed at the beginning of October, but speculation is that he will likely name Harvard-educated Yoshimasa Hayashi, a close confidant with extensive Cabinet experience, as Foreign Minister. Shortly thereafter, the Cabinet will submit a fiscal year 2021 supplementary budget package that will include a variety of economic stimulus measures, for the Diet to pass by the end of this year. Prime Minister Kishida pledged that he would move quickly on his priority policy agenda: strengthening countermeasures against Covid-19, advancing his “New Capitalism” policy to ameliorate economic inequality, and implementing a more robust foreign policy and national security strategy.

In light of the success of the country’s vaccination program and declining Covid-19 cases, Kishida also plans to resume the Go-To-Travel campaign, which includes generous subsidies for domestic tourism, as well as to relax strict quarantine restrictions on overseas business travelers and foreign students. On November 2, Japanese officials indicated that the government plans to shorten the quarantine period for vaccinated businesspeople from overseas to three days from the current 10, with conditions, in the near future.

With regard to his “New Capitalism” vision, Kishida has repeatedly emphasized the need to create a "virtuous circle of growth and distribution" in which the benefits of growth are appropriately shared to fuel the next stage of growth, especially through increases in wages. During his post-election news conference, Kishida underscored his intention to increase investments in science and technology to accelerate the economy, particularly in emerging technologies including artificial intelligence and cybersecurity. Kishida also noted the need to increase the resilience of supply chains in order to enhance economic security. He pointed to the need to revise the country's National Security Strategy, saying he will work quickly to "strengthen [Japan's] missile defense capabilities." On energy policy, Kishida has said that Japan should take all necessary steps to meet its commitment to become carbon-neutral by 2050, and, despite substantial public opposition, has said that nuclear energy should remain an option. In his first international speech, Kishida announced at the COP26 conference in Scotland on November 2 that Japan will commit an additional $10 billion over the next five years to overseas climate financing and pledged that Japan will play a leading role in decarbonization in Asia. Kishida has emphasized the importance of doing more to address the needs of both the young and the old in Japan, particularly by strengthening social welfare policies to cope with the declining birth rate and aging population (“all-generation social security”). Kishida has said that he will prioritize improving the healthcare and nursing care service system, where a shortage of human resources was highlighted during the pandemic, by establishing a new Public Price Evaluation Committee to lift wages for caregivers and childcare staff. In light of Kishida’s focus on improving wages for workers in the health care and childcare sectors, his administration may look for cost reductions elsewhere in the health care system. The most frequent target for this kind of cost-cutting in the past has been the budget for pharmaceuticals and medical devices.

As a new prime minister, Kishida faces questions about his ability to successfully develop and implement his policy agenda. This is expected to be made more difficult by the replacement of Akira Amari as LDP secretary general. Amari was a leading voice within the ruling party on economic policy, particularly on supply chains, advanced ICT, and broader economic security matters. He has also served as the chair of the LDP committee on semiconductors and emerging technologies. He is likely to continue to be an important voice in policy councils, but to what extent remains to be seen. The LDP has further suffered the retirement of a number of Diet members who were leaders of the "Health and Welfare Tribe" that helped drive major policy initiatives relating to health care. These include former House of Representatives Speaker Fumiaki Ibuki, former Ministry of Health, Labor, and Welfare (MHLW) Minister Yasuhisa Shiozaki, and former MHLW Minister Jiro Kawasaki. In addition, a number of other Diet members with ties to MHLW or health care generally lost their seats in the election, including: Naomi Tokashiki (former MHLW vice minister), Kazuhide Okuma (former parliamentary secretary at MHLW), Yayoi Kimura (former nurse), and Takao Ando (doctor). Other LDP members will need to step up to fill this void, which could slow decision-making on health care policy matters.