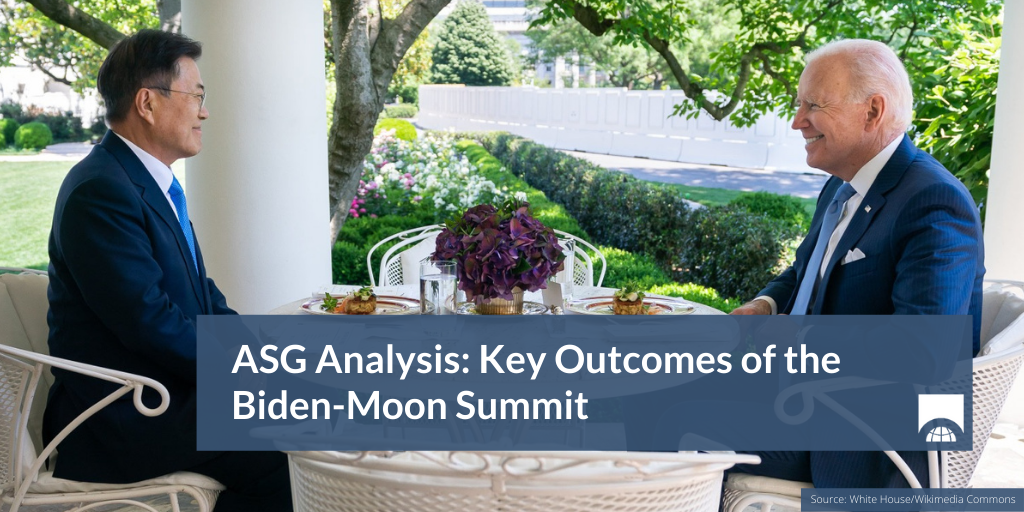 Defying the odds and surprising skeptics, the May 21st summit between Presidents Biden and Moon proved to be a success. This outcome was hardly guaranteed, and it came as a welcome relief to a U.S. administration that has made rebuilding and reinvigorating alliances a central foreign policy goal.

In the weeks before the summit, it was an open secret that Washington and Seoul were not on the same page on key issues, including how to respond to China’s ascendancy, the importance of U.S.-South Korea-Japan security cooperation, and how to deal with North Korea. Finding a way to manage these differences was an important priority for the Biden administration, which was eager to follow up a highly successful summit with Japanese Prime Minister Yoshihide Suga with yet another demonstration of allied solidarity. The United States was also eager to gain South Korean support for its Indo-Pacific strategy, particularly its focus on an increasingly assertive China.

President Moon arrived at the summit looking to gain the support of a skeptical Biden administration for his conciliatory approach to North Korea and his determination to reinvigorate diplomacy with North Korea before he leaves office next year. Moon also understood he needed to disabuse President Biden of the notion that South Korea was “tilting” towards China and was an unreliable partner as the U.S. confronted Beijing’s quest for regional dominance. On the domestic front, Moon, under public pressure due to his government’s slow Covid-19 vaccine rollout, hoped to get U.S. assistance in procuring vaccines.

U.S. and South Korean alliance managers had four core goals for this first face-to-face meeting between the two presidents: (1) smooth over U.S.-South Korea differences, especially on North Korea; (2) reaffirm the strength of the U.S.-South Korea alliance; (3) expand the scope of bilateral cooperation into new areas; and (4) for the United States, obtain South Korean acknowledgement of the new geostrategic environment in the Indo-Pacific region and convince Seoul to work more closely with Washington and its Quad partners (India, Japan, and Australia) in responding to emerging challenges, including from China.

The summit achieved all of these goals.

President Biden and his team downplayed their well-known skepticism of Seoul’s approach on North Korea and took steps – admittedly all symbolic – to show solidarity with Moon. The U.S. agreed to appoint a part-time special representative to manage eventual talks with North Korea, reassured Moon that U.S. policy would be “based on” previous U.S. and South Korean agreements with Pyongyang, and reiterated U.S. willingness to negotiate with North Korea. The unexpected appointment of the new U.S. special representative, Ambassador Sung Kim, clearly impressed President Moon, who evidently believes it will convince Pyongyang of U.S. sincerity about talks. U.S. officials seem less optimistic that the appointment will change North Korea’s reluctance to discuss denuclearization.

The Biden administration’s gestures on North Korea opened the way for President Moon to take important steps to accommodate Washington’s priorities. Moon, who has scrupulously avoided addressing the human rights situation in North Korea, agreed to include a reference to human rights in the U.S.-Republic of Korea (ROK) Leaders’ Joint Statement issued after the summit. In the statement, Moon also agreed to the “full implementation” of UN Security Council resolutions, despite his past calls for international sanctions to be eased.

Moon, often depicted as only a lukewarm supporter of the U.S.-South Korea military alliance, went out of his way to demonstrate his commitment to the alliance. He visited Arlington National Cemetery soon after arriving in Washington, participated in a Medal of Honor ceremony at the White House, delivered emotional remarks at the groundbreaking for a Wall of Remembrance to be built at the Korean War Memorial, and gave a ringing endorsement of the alliance in the Joint Statement.

In addition to these commitments from Korean companies, the two presidents agreed to enhance U.S.-South Korean cooperation on emerging technologies, cooperate on supply chain resilience, and encourage joint research and development on “critical and emerging technologies through programs nurturing AI, next-generation mobile network (6G), data, quantum technology, and biotechnology.” In shepherding these new commitments, President Moon gave a major boost to U.S. efforts to compete against China in critical technologies.

While the U.S. and South Korea were unable to reach an agreement on South Korea’s proposed “vaccine swap,” which Moon administration officials advertised in the lead-up to the summit, President Biden responded with a commitment to provide 550,000 Covid-19 vaccine doses to inoculate all of South Korea’s military. In addition, the two countries announced new cooperation on vaccine development and production. Notably, the two sides agreed to create a South Korea-U.S. Global Vaccine Partnership that will combine American technology with South Korean production capacity. In a first step towards this goal, Moderna announced its selection of Samsung Biologics to manufacture its Covid-19 vaccine for non-U.S. distribution – an agreement struck during the summit. Shortly afterwards, Moderna announced it entered into two MOUs with the South Korea government on joint mRNA research and vaccine manufacturing opportunities.

Finally, President Moon’s endorsement of the U.S. Indo-Pacific strategy was an unexpected outcome of the summit. The two presidents declared their opposition to “all activities that undermine, destabilize, or threaten the rules-based international order” and committed themselves to maintaining an “inclusive, free, and open Indo-Pacific.” President Moon acknowledged the importance of the Quad and expressed support for “freedom of navigation and overflight in the South China Sea.” For the first time in any U.S.-ROK statement, Moon agreed on the “importance of preserving peace and stability in the Taiwan Strait.”

China has already criticized the reference to Taiwan and South Korea’s endorsement of the U.S. Indo-Pacific strategy. It remains to be seen whether Beijing will try to make Seoul pay a price for its strong “tilt” towards the United States. This outcome, in particular, comes as a surprise, as President Moon has often shown deference to Beijing and its concerns while fear of offending China runs deep in the Blue House in Seoul. However, at the summit Moon emphatically aligned himself and his government with the United States, with the values the two countries share, and with the idea that South Korea should help protect the rules-based international order and a free and open Indo-Pacific.

President Moon received a significant boost to his domestic public approval after the summit because he delivered credible outcomes on Covid-19 vaccines. In a survey conducted by four separate polling agencies, President Moon’s approval rating rose to 42 percent, a six percent increase from the historic lows his administration received before the summit. Notably, 55 percent of survey respondents assessed the Moon-Biden meeting to be a success, compared to 34 percent who considered it to be a failure. The successful visit came at a fortunate time for President Moon and the ruling Democratic Party of Korea, as South Korea prepares to turn its attention to the next presidential election in March 2022.