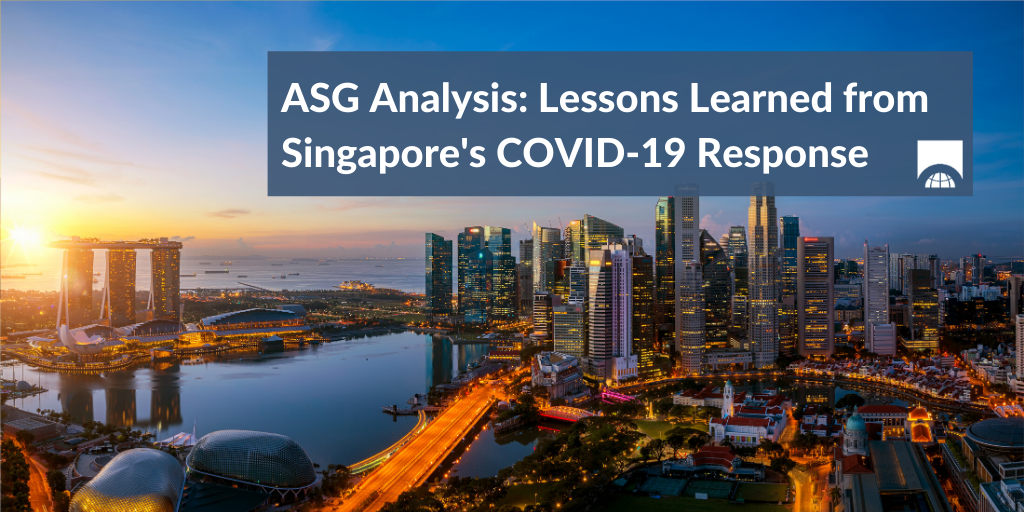 As governments around the world implement various responses to the global pandemic COVID-19, many experts have pointed to Singapore as an example of an effective policy response. A regional hub for finance, trade, and travel, Singapore was one of the first countries to suffer from COVID-19, at one point reporting the second-highest number of infection cases after China. Even as many neighboring countries reported outbreaks, Singapore’s rate of transmission stabilized. In addition, Singapore’s public health system has provided necessary care, and despite having 243 cases as of March 16, the death toll is zero. Schools remain open, as do restaurants and other establishments. Many organizations are implementing a work-from-home policy and public events with more than 1000 attendants are discouraged, but for the most part, it is business as usual. The city-state’s many shopping malls are back to capacity, but some experts are worried about the risk of complacency given that two-thirds of all new cases have been “imported” and this week saw a new spike in Singaporean cases.

In a March 15 CNBC interview, Foreign Minister Vivian Balakrishnan, a doctor by training, credited Singapore’s relative success in managing the outbreak thus far to its swift execution of a multi-pronged strategy: a) strong government coordination and communication; b) border controls and monitoring of travelers, including barring entry of travelers from China one week after the first reported case in Singapore and consistent checking of temperatures of all travelers coming in by air, land, and sea; c) establishment of strict standards for quarantine and self-isolation, and enforcement of the rules; d) engagement with the private sector and e) a strong public health infrastructure.

Singapore, an island with a population of less than 6 million people, benefits from its small size, which enables its government a high degree of inter-agency coordination and close communication with its constituents. The legacy of effective governance of the ruling People’s Action Party through several decades has also solidified public trust in the government’s actions on public health, which was tested in 2003 with the outbreak of SARS, another coronavirus which caused severe respiratory illness.

Singapore has been praised for its transparency in carrying out its COVID-19 response. The Ministry of Health issues a daily statement that includes the list of cases, and considerable detail on each case, including the possible location of infection so that others who may have been exposed can self-report.

Official statements are complemented by a series of public service announcements (PSAs) on good hygiene, medical testing, and related matters. The clever PSAs are often fronted by popular public figures, including comedians.

Even before Singapore reported its first case of COVID-19 on January 23, Changi Airport was carrying out temperature checks; first of passengers arriving from Wuhan, the Chinese city where the outbreak first occurred, and then extending temperature monitoring to all travelers from China and later to all travelers.

Onwards from January 24, temperature checks became standard protocol at office buildings, shopping malls, and schools; parents were mandated daily to submit a form detailing their children’s temperature. Later that week, travelers returning from China were subject to increased levels of screening. On January 27, students, teachers, and those who work with vulnerable populations were issued 14-day Leave-of-Absence notices, which meant they were to work or study from home. The following day, as infections increased, quarantine orders were issued to travelers returning from Hubei -- and on January 29, all travelers from Hubei were denied entry altogether, with the ban extended to all visitors from China three days later. The ban sparked admonition by the World Health Organization, who deemed at the time that such measures were not necessary. The travel ban was subsequently expanded to include visitors from South Korea, Iran, and northern Italy, following outbreaks there, while returning residents from those countries were issued Stay-at-Home notices.

On March 13, travel bans and the Stay-at-Home notice were expanded to include all of Italy, France, Spain, and Germany. Two days later, Japan, Switzerland, the UK, and all ASEAN countries were added to the list. Short-term visitors from ASEAN countries now require approval from Singapore’s Ministry of Health.

Singapore has put in place strict measures to contain the outbreak, which include both sanctions against those violating public health policies and proactive steps to bolster public confidence.

The Leave-of-Absence and Stay-at-Home notices have been the cornerstone of Singapore’s deterrence approach, isolating those who may be at a high risk of infection. Those in mandatory home quarantine are monitored regularly through daily phone calls, location sharing, and spot checks. Violators face sanctions that include a S$10,000 fine, prison time, or cancellation of residency permits.

Gatherings of large numbers of people undergo thorough screening. Anyone entering a government or office building must provide contact information and have their temperature checked. Gatherings of more than 250 persons, including religious activities, are strongly discouraged. Ticketed events exceeding this size limit have been canceled. Following an outbreak related to a religious gathering in Malaysia which involved several Singaporean nationals 70 mosques were asked to close until March 26.

Singapore is similarly proactive in encouraging public confidence. Following a shortage of face masks due to panic buying and price gouging, officials provided each Singaporean household with four face masks, although they were advised to use them only when ill or while visiting a health clinic. Offices and educational institutions are now regularly disinfected. Singapore also carried out thorough contact tracing of the infections, identifying and contacting individuals who had contact with infected patients.

Engagement with the Private Sector

In addition to the use of thermal scanners, the government has worked closely with employers to stem the spread of COVID-19. Employers with foreign workers returning from affected countries must request approval from the Ministry of Manpower (MoM) for their employees to return to Singapore. Employers must also help foreign employees make quarantine arrangements and acquire supplies if they are unable to do so. Employers who fail to provide this support can be reported to MoM and may have their ability to give out work passes revoked. Companies are also forbidden from counting the quarantine days as part of the staff member’s annual paid leave. After Malaysia closed its border with Singapore on March 16 due to COVID-19, the Singaporean government announced that it was looking to provide financial support and accommodation at reduced rents for companies that needed to temporally house foreign workers.

After its experiences with SARS and swine flu Singapore realized that a robust infrastructure for public health is essential in thwarting transmission and fatalities. The government has made significant investments that have helped Singapore’s current response and are expected to bolster future responses. These include a state-of-the-art hospital for infectious disease which opened in 2019. Today, the hospital provides free medical treatment for both confirmed and suspected patients, although as of March 10, the fee waiver excludes non-residents. The government also operates numerous quarantine facilities that were established during the SARS outbreak. Located throughout the city, the facilities can accommodate up to 2,000 people and are used for those unable to isolate at home.

Singapore has also invested in its testing infrastructure, which has enabled the current COVID-19 test to be made widely available, and for results to be delivered within three hours. The swab tests, developed by the country’s Home Team Science and Technology Agency along with Veredus Laboratories, have been used at the country’s entry points for early diagnosis. Due to Singapore’s capacity for thorough testing and tracing, a Harvard study published in February reported that Singapore was detecting three times more cases than the global average.

Described by Foreign Minister Vivian Balakrishnan as a ‘(genie) out of the bottle,’ COVID-19 is having an adverse impact on the economy. A Reuters poll reports that growth in Singapore may fall by more than one percent this year; already, the economy is expected to contract by 0.6 percent in the first quarter of 2020 -- its worst showing since 2009 in the aftermath of the global financial crisis. The government has downgraded its own forecast, to a range of -0.5 percent to 1.5 percent (compared to its previous forecast of 0.5 percent to 2.5 percent). Yet a general election is on the near horizon, possibly before mid-year.

To improve the outlook, the government issued an SGD 6.4 billion (USD 4.5 billion) stimulus package that includes SGD 4 billion for small businesses and workers, SGD 1.6 billion for households, and SGD 800 million for health care. On February 28, the government also announced a delay in the increase of goods and services tax. A second stimulus package is said to be in the works, possibly slated for April, when the country’s first-quarter growth rates will be announced. It is expected to be more broad-based, perhaps including support for sectors that have been negatively affected, such as education and manufacturing.

Singapore relies greatly on international travel for business, tourism and health services. While border closures are not sustainable for the long term, Singapore’s policy of travel restrictions and mandatory self-quarantine, in addition to island-wide temperature screening, has produced results.

Beyond the extensive previously-mentioned restrictions on entry from China and for travelers who have visited Iran, Italy, Germany, France, Spain, and South Korea, restrictions include:

Singaporean officials have also been outspoken in criticizing other governments' measures as insufficient. On March 15, Minister for National Development Lawrence Wong said that the U.K. and Switzerland were not taking proper steps for containment.

As part of Singapore’s effort to advocate for an ASEAN-wide integrated approach to combating COVID-19, Minister Balakrishnan has described a “test-kit diplomacy” that includes sending humanitarian assistance such as safety goggles, masks and medical grade hand wash to China, thousands of diagnostics tests to Myanmar, and hazmat suits and two ventilators to the mayor of Batam in Indonesia. Additional support is planned for neighboring countries.