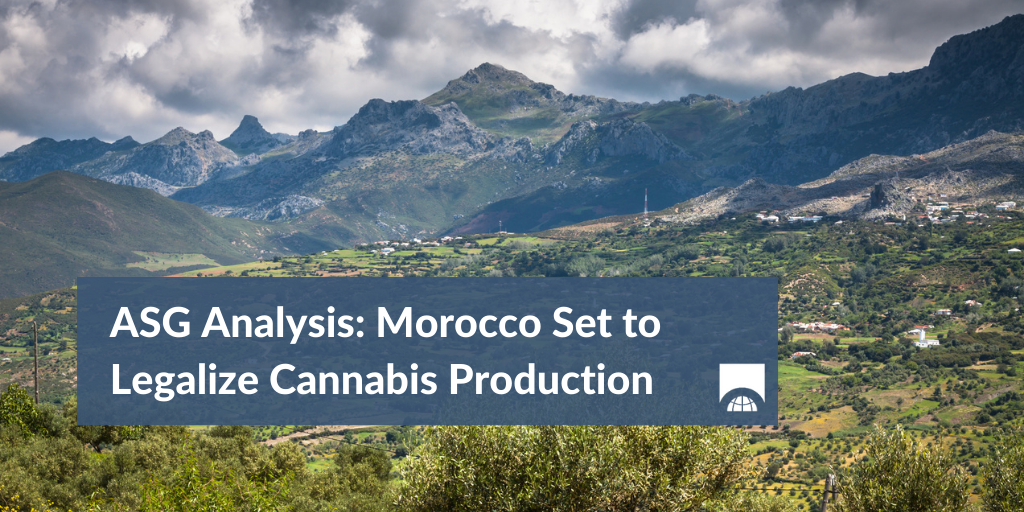 Economic and political drivers intersect to support the push for legalization

On March 11, the Moroccan government approved a draft law legalizing the production and sale of cannabis for medicinal, pharmaceutical, and industrial use. Selling or producing cannabis for recreational purposes remains prohibited. With government support and the private endorsement of Moroccan King Mohammed VI, the law is likely to be passed by the Moroccan parliament in the coming months.

Moroccan farmers have been illegally producing cannabis in the northern Rif mountains for decades. The United Nations (UN) reports that Morocco is now the world’s largest producer of cannabis resin (the sap-like substance of the cannabis plant that is used to make “hash”), and the Moroccan government estimates that the illegal industry is worth $15 billion. However, most of the profits flow into the hands of drug traffickers who smuggle deliveries into Europe. Arguments in favor of legalization—including, increasing incomes for Moroccan farmers, generating taxes, growing the Moroccan economy, and thwarting drug traffickers—have long circulated within Morocco’s political and business circles. However, until now, these arguments have been met with resistance from conservative politicians.

Diminished exports, remittances, and tourist revenues as a result of Covid-19, as well as an unusually long drought last winter, appear to have changed the political calculus. The International Monetary Fund (IMF) estimates that the Moroccan economy contracted by 7.2% in 2020. Unemployment and poverty have increased, and so has the risk of public demonstrations. Demonstrations are especially prevalent in the cannabis-producing Rif, which has seen popular uprisings over the last few years demanding an end to corruption and socio-economic inequality.

To address the economic crisis and rising public anger with the government, King Mohammed VI has introduced a series of measures – including a $13-billion stimulus package, increased welfare protections, and several new public investment funds, including one in the King’s name. The Mohamed VI Investment Fund, which is still being developed by the Moroccan government, is focused on invigorating Morocco’s most “productive sectors.” Although the King has not publicly supported the legalization of cannabis, it is an open secret that the King considers the cannabis industry to be one of these sectors, a view that was likely relayed by the King’s trusted advisors to the government before it passed the legalization law. The potential for increased tax revenues is also vast. Cannabis-related tax revenues range between $20-40 million a month in U.S. states such as Colorado and California.

Practical considerations may have also driven the decision by Minister of Interior Abdelouafi Laftit to present the draft legalization law to the government. The Ministry of Interior has spent millions of dollars on its aggressive campaign to eradicate cannabis operations, arrest drug traffickers, and seize deliveries, which totaled 217 tons of cannabis in 2020. With a projected fiscal deficit of 6.3% of GDP in 2021, the government likely weighed any decision to reduce spending on drug-related law enforcement against the consequences of emboldening illegal traffickers. The European Monitoring Center for Drugs and Drug Addiction reported a marked rise in international organized criminal groups after many governments reduced funding for law enforcement because of the 2008 financial crisis.

Cannabis legalization is also a way for Moroccan political parties to gather voter support ahead of municipal and legislative elections scheduled for September 2021. The conservative Justice and Development Party (PJD), which has been the ruling majority since 2011 and is led by Prime Minister Saadeddine Othmani, had long opposed legalization but recently changed its position. The PJD previously accused opposition parties such as the Authenticity and Modernity Party (PAM) and the Istiqlal party of supporting legalization only to win votes from people in the Rif, not to benefit the Moroccan people or economy. However, the high stakes of these elections (whichever party wins the most seats will be represented by a new Prime Minister) and criticism of the PJD for supporting normalization with Israel likely changed the PJD’s calculus. Ostensibly, the PJD supported legalization because the UN removed cannabis from its official list of the world’s most toxic drugs in December 2020.

A national agency will govern the legal cannabis market in Morocco

The new law envisions the establishment of a national agency that will govern the production, manufacture, distribution, and export of cannabis in Morocco. The agency aims to create a robust ecosystem that supports the development of industrial and agricultural supply chains between cannabis-producing farmers, key exporting or processing companies, and relevant organizations and public-sector entities. Once the law goes into effect, the agency will set regulations to define, among other issues, the regions in which cannabis can be grown (since water scarcity is a problem in some regions in the Rif); the types of seeds, GMOs, or plants that can be used to produce cannabis; and the environmental standards that farmers and companies must follow.

The Moroccan government likely plans to grant licenses to a small group of leading cannabis companies to play a central role in processing and exporting cannabis from Morocco. These companies will be chosen based on their position in the global legal cannabis market, track record of compliance with local regulations, and complete detachment from the dark drug market. This last criterion will be a deal-breaker for the Moroccan government, since it will not want to be involved in any capacity with a company that has engaged in illegal cannabis production or trafficking in Morocco. The selection of these companies is likely to be based on individual mutual agreements rather than blanket tendering procedures, in line with Moroccan government interests to allow companies to steer the development of the new sector.

The law requires companies to commit to buying a set amount of cannabis from Moroccan farmers throughout the duration of their partnership. These commitments will be outlined in contracts between each company and a consortium of farmers, which will be organized and overseen by the new agency. Part of the reason that the law prescribes Moroccan farmers to cultivate cannabis is because foreigners cannot own land in Morocco. In cases in which a company seeks to directly access Moroccan land to grow or process cannabis, it must receive written, documented permission from a Moroccan landowner. Morocco passed a draft law in early 2020 allowing publicly limited companies to acquire Moroccan land for agricultural purposes with authorization from the government, but the law has not gone into effect.

The legalization of cannabis production in Morocco is an opportunity for companies to play a central role in the new industry and build long-term, commercial partnerships in Morocco. Companies should distinguish themselves by lending industry expertise and guidance to the Moroccan government, emphasizing their commitments to supporting the Moroccan people and economy, and reinforcing their reputations as transparent and law-abiding. Companies should also make engagement with the new national cannabis agency an immediate priority. Companies that support the agency in defining the new regulatory and policy landscape and aligning it with global industry standards will set themselves apart.