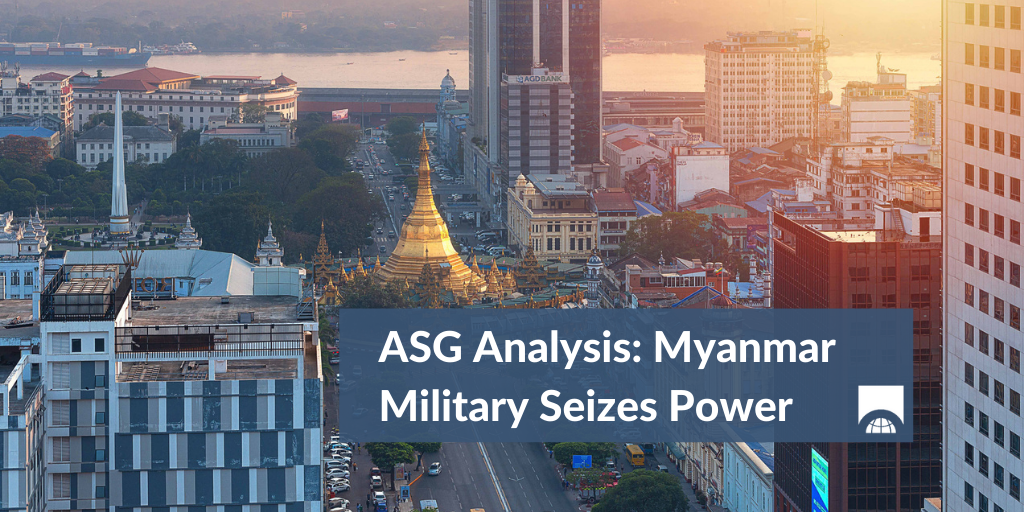 The Tatmadaw (Myanmar military) arrested the leaders of the National League for Democracy (NLD) in coordinated early morning raids February 1, bringing to conclusion a month of escalating tensions and overthrowing Myanmar’s government 10 years after the country returned to democracy. Among those arrested were State Counsellor Aung San Suu Kyi, President Win Myint, numerous state and regional chief ministers, several federal and state cabinet ministers, as well as key NLD Members of Parliament (MPs), religious figures, entertainers critical of the Tatmadaw, and activists belonging to groups such as the 88 Generation. The Tatmadaw also fired scores of Deputy Ministers and other officials from their positions. As of February 2, arrests were reportedly widening to include a broader range of civil society figures. The Tatmadaw’s justification for the coup was alleged voter fraud in the 2020 general election.

Vice President Myint Swe declared a one-year state of emergency as acting president, handing legislative, executive, and judicial power to Commander in Chief Senior General Min Aung Hlaing. Under the 2008 constitution there is a provision for the president to call a state of emergency, but as Myint Swe was only serving as acting president because the Tatmadaw had arrested the president, the legality of the maneuver is murky at best.

Cellphone and data service was blocked for four hours in most major cities on February 1, but has since resumed. Although continued interruptions have been reported, there is no indication the Tatmadaw will attempt to return to the iron grip on communications it held in the pre-2010 period when Myanmar was significantly more isolated. While the coup thus far has been bloodless, there have been reports of military supporters harassing journalists and NLD sympathizers, and many analysts fear violence could erupt in major cities such as Yangon and Mandalay, where resentment of the military runs deep. There have been early reports of work stoppages among civil servants and medical workers and other acts of resistance.

While Min Aung Hlaing will retain overall control of the country during the state of emergency, numerous officials from the former Thein Sein transitional regime run by the military proxy Union Solidarity and Development Party (USDP) were appointed to run the day to day operations of the government. ASG assesses that the swift naming of this team indicates the Tatmadaw had conducted significant advance planning for an interim government. Among those tapped for key roles are:

In remarks following the first meeting of the new government February 2, Min Aung Hlaing placed blame on the NLD for refusing to engage on election fraud, saying, “Despite the Tatmadaw’s repeated requests, this path was chosen inevitably for the country…During the state of emergency, the election and fighting Covid-19 are set priorities.”

ASG assesses there were four key drivers of the coup:

While the Tatmadaw has announced it intends to hold “free and fair elections” and hand over power to the winner, it will likely attempt to reform electoral rules further in order to have more control over the outcome. In 2010, the NLD was not permitted to participate in the election and many smaller parties boycotted, resulting in a victory for the USDP, but Aung San Suu Kyi still carried enormous international cachet at the time due to her reputation as a democracy advocate. The Tatmadaw knew it would never be able to truly achieve its goal of integrating with the world without creating political space for her. In the current environment, the Tatmadaw believes Aung San Suu Kyi does not have the same international support, and it is likely the Tatmadaw plans to keep her confined at least until after a new election. Minister level officials may be asked to sign statements withdrawing themselves from politics in order to avoid prosecution. The NLD has released a statement calling on the Tatmadaw to release its leaders, abide by the 2008 constitution, and call a special session of parliament. Whatever system the Tatmadaw selects, ASG assesses it will likely be one that will enable Min Aung Hlaing to hold civilian executive power.

The United States condemned the coup in strong terms. A February 1 statement from President Biden promised “an immediate review of our sanction laws and authorities, followed by appropriate action.” Biden’s statement seemed to indicate the U.S. would aim to coordinate actions with others, saying “The United States is taking note of those who stand with the people of Burma in this difficult hour.” On February 2, U.S. state department officials said the administration had officially found the Tatmadaw’s actions to constitute a coup, triggering an automatic review of U.S. assistance. Reportedly approximately $135 million in U.S. assistance targeted for civil society organizations and in support of the peace process should still be able to continue. Barring a massive reversal, ASG expects the Biden administration will place sanctions on Myanmar’s military government, likely through the Global Magnitsky Act rather than any new structure. Military holding companies such as Myanmar Economic Corporation (MEC) and Myanma Economic Holdings Limited (MEHL) are likely targets. Those two entities are so significant within the country’s economy that renewed sanctions on them would make U.S. investment in the country extremely difficult. While the Tatmadaw was initially hopeful about the removal of U.S. sanctions, the expected windfall of Western investment never materialized post 2012, and the Biden administration may also pursue sanctions against the family members of key generals in order to pressure them. Min Aung Hlaing and other senior generals have already been personally sanctioned by the U.S. and EU over their roles in the Rohingya genocide in 2017.

The “quad” partners of the U.S., India and Australia also issued strong statements calling for the respect for the rule of law and the release of those detained, but the fourth member of the quad, Japan, was slower to respond, although the country did eventually call for the restoration of democracy. Japan is heavily invested in Myanmar and recently worked with the military to try to broker a peace deal with the Arakan Army that would have allowed for elections in restive Rakhine state.  The European Union stated it was “in touch with our international partners on this most pressing issue to ensure a coordinated response.”

Brunei, in its role as ASEAN chair, issued a statement calling for “dialogue, reconciliation, and return to normalcy”, which is relatively strong for the regional grouping which adheres to a norm of non-interference, but reactions from individual ASEAN states ranged from expressions of “grave concern” to statements that Myanmar’s politics are its own affair. The muted reactions illustrate the unlikelihood of ASEAN putting pressure on Myanmar that would reverse the coup, although they may win some concessions. This dynamic and Myanmar’s continued participation in the grouping may be an irritant to U.S. attempts to reengage ASEAN. Before Myanmar’s transition to democracy began in 2010, U.S. engagement with ASEAN was often limited by the participation of Myanmar officials.

China issued a muted statement, saying it had “noted” the coup and that it hoped “all sides in Myanmar can appropriately handle their differences under the constitution and legal framework and safeguard political and social stability.” While there was some speculation that the Tatmadaw would have sought approval from Beijing ahead of time, ASG assesses this is unlikely. It was under former General Thein Sein’s government that China’s major Myitsone Dam project was cancelled amid outreach to the U.S. China has worked hard to build relationships with the NLD and Aung San Suu Kyi in order to compensate for tense relations with Myanmar’s military, which is wary of China’s ties to Myanmar’s ethnic armed groups. Despite these tensions, any action by China against the Tatmadaw is very unlikely.

The UN Security Council is expected to hold an emergency meeting on Myanmar February 2, but China and Russia will likely block significant action.