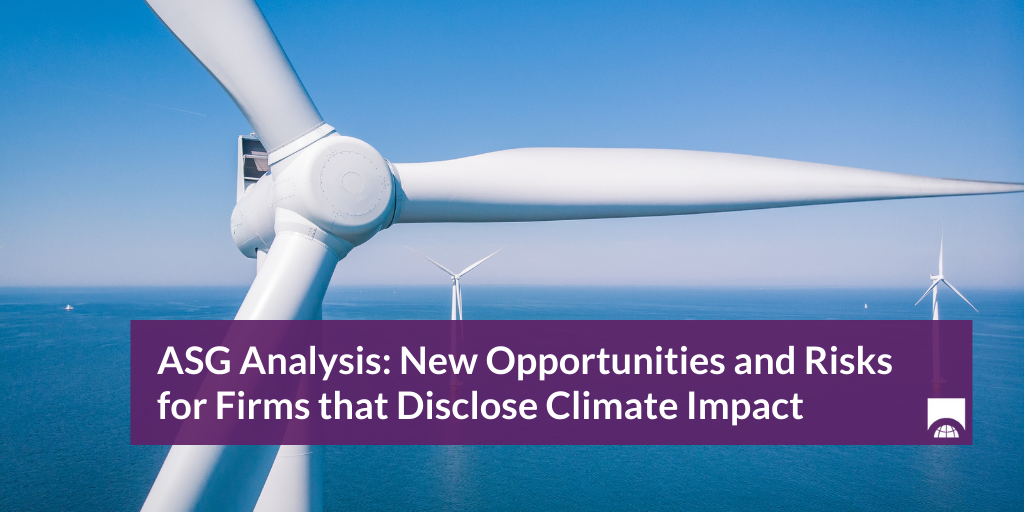 Climate disclosure – the requirement for companies to make information publicly available in the four major areas of governance, strategy, risk management, and metrics and targets – is increasingly becoming a hot-button issue.

Although there are varying methods and standards in different markets, governments around the world are moving in the direction of demanding more data and greater transparency. Reporting requirements for specific carbon-intensive industries are common across many jurisdictions. Now, measures that capture a broad cross-section of companies are under development. These include:

When it comes to global governance, there is an ever-expanding galaxy of international organizations competing to set overlapping standards.

Some consolidation took place in November 2021, when the International Financial Reporting Standards Foundation established the International Sustainability Standards Board, which aims to consolidate various reporting frameworks. Although this is a much-needed step, it is unclear if it comes too late to prevent the continued fragmentation of global regulation. Meanwhile, many jurisdictions have adopted the framework set out by the Task Force on Climate-Related Financial Disclosures (TCFD), including several of the countries listed above. The U.S. Securities and Exchange Commission is due to vote on its proposed standards on March 21, which may be based on TCFD recommendations.

The outlook for companies facing an evolving web of standards and regulations is similarly inconsistent. Many regulators will continue to require corporates to disclose material climate risks, but far fewer are demanding the release of audited emissions. Furthermore, some jurisdictions, such as Switzerland, look to influence corporate policy indirectly via investors, and are focusing on disclosures for banks and insurers rather than non-financial corporates. Still others, such as the EU and U.K., are adopting a “triple pincer” approach through regulations influencing corporates directly, as well as via investors and central banks.

Companies operating in jurisdictions at the forefront of new policy – and those firms looking to attract capital from investors in those areas – are already confronting the issue of extraterritoriality.

These companies will likely be forced to meet relevant requirements regardless of regulations in their home jurisdictions. Multinational firms doing business in or with markets leading on disclosure policy are expected to be affected, despite possibly less onerous requirements in their home countries.

For example, the EU has adopted rules for investor disclosures that will require EU investors to seek ESG information from companies in which they invest. This Sustainable Finance Disclosure Regulation will also include ex-EU managers that market funds within the EU. With some of the world’s largest asset managers based in the EU – including UBS, Allianz, and Amundi – this could drive global trends in disclosure standards (similar to the way that the General Data Protection Regulation has impacted privacy rules around the world). Foreign companies that have EU subsidiaries will become subject to the EU’s proposed Corporate Sustainability Reporting Directive, under which new binding reporting standards are being developed that may deviate from standards used in the company’s home jurisdiction.

Measuring and disclosing corporate emissions and climate exposure poses a significant risk for many companies. But for those multinationals that have developed strong climate metrics and standards for transparency, the potential for commercial opportunities is enormous.

Opportunity: Companies that build a leadership position in climate disclosure and emissions performance protect themselves and expand their access to capital. Corporates in low-emission or low-climate risk industries have clear advantages to disclosing their comparatively small exposure to climate change. But firms in high-emission or high-climate risk sectors can still use disclosure as a competitive advantage over less transparent peers with similar emissions profiles.

Today, investors confront a murky picture when it comes to analyzing the environmental credentials of companies and rewarding them for green behavior. Inconsistent definitions, reporting formats, and level of detail conspire to prevent rigorous analysis. Emissions reports are generally unaudited, definitions of terms such as “net-zero” vary widely, and targets are often several decades out with no interim milestones.

As a result, investors and customers are unable to distinguish between “real” green credentials and those of companies who aggressively promote their brands. This confusion makes it far easier for underperforming companies to free ride on the genuine credentials of their competitors. In turn, this deprives companies of the incentives they need to take action that will spur them ahead of competitors in the race to meet climate goals.

Not surprisingly, many ESG-focused investment funds and indices struggle to accurately filter their potential investment universe. MSCI’s global ESG Leaders Index includes in its top 10 firms Nvidia, Home Depot, and Taiwan Semiconductor – none of which are particularly noted for sustainability. Moody’s efforts to create ESG ratings for small and medium firms rely largely on geographic and industry data rather than firm-specific information, which often requires direct engagement with the individual company.

Firms that actively disclose clear information will make it easier for ESG raters and funds to reward them.

Risk: Companies with poor levels of climate disclosure will begin to be excluded from ESG-focused indices and funds, and will find it increasingly difficult to attract capital, as even non-ESG investors start to assess climate impact as a major financial risk.

Visibility into companies’ emissions profile has the potential to provide clarity into the carbon intensity of products and services. This is likely to enable not only investors and customers, but also civil society, policymakers, and employees to differentiate between corporations. This creates significant risk for companies who have oversold their ESG accomplishments to date, particularly in those industries where competitors have successfully begun to abate emissions.

Opportunity: Companies could offer data to customers on the carbon intensity of their products, solving a pain point. As carbon trading and carbon pricing become more widespread, this will produce quantifiable monetary value by allowing customers to build products with lower carbon intensity, subject to lower costs.

Companies have the ability to exert some measure of control over different kinds of emissions. On one end of the spectrum, there are Scope 1 emissions (those generated by direct operations) and Scope 2 (a company’s purchases of power). On the other end of the spectrum are emissions that are far harder to control, yet vital to the company’s products; these are the Scope 3 emissions produced by component manufacturers and other parts of a company’s up- and downstream supply chain. Jurisdictions, including the U.S., could require reporting of Scope 3 emissions. As a result, the carbon intensity of a B2B supplier’s operations will impact the reported emissions of every downstream company in the supply chain.

Carbon intensity, therefore, could easily become important in B2B supplier-customer relationships. This creates a new lever for companies, with those outperforming on carbon intensity able to use this as a real competitive and pricing advantage with customers. Even if Scope 3 emissions reporting does not become mandatory in most geographies, companies with a strong grasp of their emissions profiles could nevertheless use this as a concrete, measurable, data-supported value-add to potential customers or suppliers. In any case, the Science Based Targets initiative, which is generally seen as the minimum standard for corporate targets, requires the inclusion of Scope 3 emissions.

Risk: Companies required to assess their Scope 3 emissions may start to assess companies in their supply chain and be forced to avoid suppliers who cannot or will not provide adequate data. This could result in lost business for those suppliers, as well as slowed production or inferior components for the broader supply chain.

Opportunity: The discipline forced by the risk of legal action can be used to drive internal consensus on a specific path to setting and achieving corporate emission reduction goals.

A vast array of companies has started to make public commitments around issues such as net-zero targets. Net Zero Tracker, a collaboration between several organizations, including Oxford University and the European Climate Foundation, found that of the world’s 2,000 largest public companies, 20 percent have released net-zero targets, and another 12 percent have set carbon neutral, carbon negative, or other similar targets.

Too often, however, these targets lack a substantial foundation. For a variety of reasons – failure to obtain internal buy-in, lack of coordination, or insufficient resources, to name a few – companies simply do not understand how to achieve the goals set by senior executives. This presents a real reputational and legal risk. While leaders setting 2050 targets are unlikely to still be in charge by the time those promises come due, investors are increasingly aware of the risk of being lulled into a false sense of security.

In the past five years, according to Brown University’s Climate Social Science Network, 20 “climate-washing cases” have been filed in courts in the Australia, France, the Netherlands, and the U.S. As companies are required to disclose emissions, investors, employees, and customers will be able to monitor progress towards stated targets.

Risk: Companies that publicly release emissions reduction targets, without transparency into whether there is a realistic chance of achieving those targets, may face litigation from investors.

Opportunity: Those firms that have identified, created, and promoted genuinely sustainable products will benefit from the increasing customer emphasis on sustainability and accountability.

Risk: Companies that have aggressively branded to take advantage of consumer preferences for “green” products, without building the necessary substance, could face rapid deterioration in product sales driven by reputational damage and potential regulatory action.

Consumers around the world are increasingly confronted by claims of sustainability that are near-impossible to verify. Many products and services currently supported by misleading claims could suffer significant reputational backlash as corporate disclosures reveal the lack of supporting data. This is already being followed up with regulation in multiple markets, with Italian and British authorities, respectively, ruling that Eni must stop making its claims of “green diesel” and against Ryanair’s ads touting lower emissions. In spring 2021, the French government published one of the world’s first regimes for punishing greenwashing; authorities can fine violators as much as 80 percent of a campaign’s cost and require corrections to be published.

Opportunity: Firms who have made good faith sustainability efforts find themselves in a powerful seat at their chosen table. Microsoft’s quick start on carbon removal, for instance, enabled it to realize the importance of carbon credits to its overall strategy. As a result, the company now plays an important role in shaping and developing the carbon credit market.

This process starts with a rigorous internal understanding of an organization’s emissions profile, risks from climate change and climate change policy, and potential opportunities. Firms that fail to conduct such an analysis limit their chances of success.

Companies taking a more proactive approach will be able to identify key priority areas related to climate, and then stake a leadership position in setting standards for those areas.

Risk: As the field becomes more crowded, with firms moving from statements to concrete action, companies who wait on the sidelines will become targets of attack, playing by rules set by their competitors, in a constant state of catch-up, and foregoing the tangible financial benefits that sustainable business practices can yield.

Building an integrated corporate policy on transparent climate standards is a multi-phase exercise. To succeed in this process, companies must at a minimum undertake these steps.