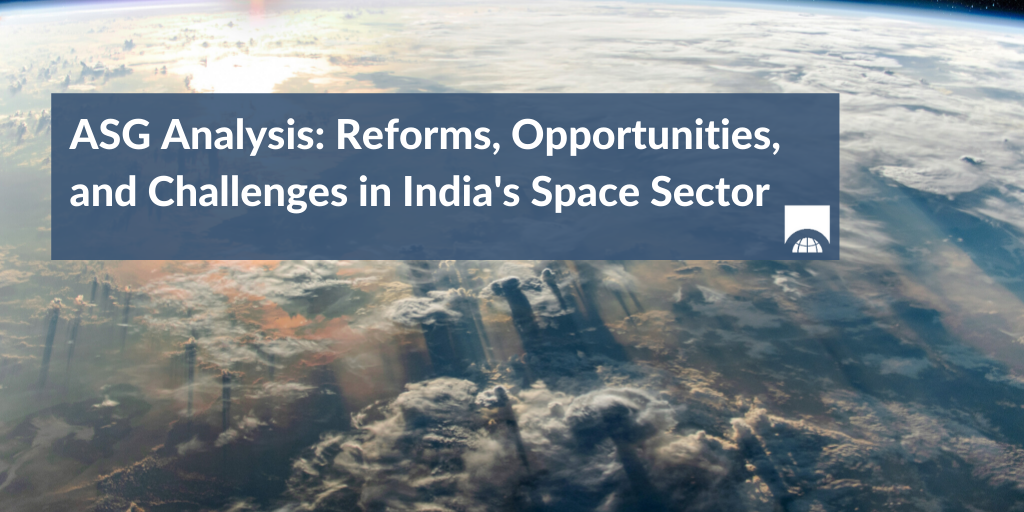 India’s space sector: Why reform it?

India’s robust space program has achieved significant progress in a relatively short time period. The country currently has the fourth-highest number of satellites in orbit, and over a dozen facilities that design and develop communications and earth observation satellites and rockets. India has also successfully conducted a lunar mission and a Mars mission, and it is the only country to do so on its first attempts. This is a significant achievement and point of pride for India, especially given its status as a “developing" nation.

The Indian Space Research Organization (ISRO) enjoys immense political support in India. In the 2020-21 budget the Indian Finance Ministry allocated Rs. 13,479 crore ($1.8 billion) to the ISRO, an 8% increase from the previous year’s budget. Overall, the Indian space economy is valued at $7 billion, around 2% of the global space economy.

Conflicts of interest: The Department of Space (DOS) sits under the Prime Minister’s Office and directly controls the ISRO. ISRO also has a commercial arm – Antrix – that promotes ISRO’s space products and technologies to an international customer base. The government therefore plays the dual role of regulator and commercial executor, which has led to significant bottlenecks in the participation of the private sector as the government balances enhancing competition with protecting the commercial viability of its own products. Although the government allows for 100% FDI into the sector, all investments are governed by the sectoral guidelines of the Department of Space/ISRO, under the government route.

National security concerns: Government security concerns around technology sharing, launch systems, and satellite capabilities have resulted in a reluctance to include private players in the industry.

The recent reforms represent a long overdue step to reconcile the regulatory hurdles and pave the path for growth.

What do the reforms include?

As part of the fourth installment of the Indian government’s economic stimulus package, the Finance Minister announced reforms that will provide “a level playing-field [for private companies] in satellite launches and space-based services.” The announcement included the following:

On June 24, the Union Cabinet fulfilled some of these promises by creating an Indian National Space Promotion and Authorization Centre (IN-SPACe), which will work with private firms to "hand-hold, promote, and guide the private industries in space activities.” Additionally, the cabinet created the New Space India Limited (NSIL), a public sector enterprise that will reorient India’s space activities from a supply-driven model to a demand-driven model and advocate for a more friendly regulatory environment in India’s space sector.

While the government has taken strong first steps to adequately deregulate, streamline, and simplify the PPP space sector model, the announcements must translate into action. The sector has potential to become a hotbed for innovation, investment, and growth. Once adopted, ASG envisions that the reforms will provide the following:

The Indian space sector is relatively small and uncrowded. With the country’s established space infrastructure, a healthy supply chain and supplier ecosystem, and the promise of additional regulatory reform, India will be one of the premier locations for space sector innovation and investments. In this capital-intensive sector, India is also advantaged by its comparatively low operating costs. Removing regulatory blockages will pave the way for increased FDI into the sector. ISRO has a strong project pipeline with more than 60 missions planned for the next five years, many of which will be conducted alongside private innovators and contractors. The following sub-sectors present key opportunities: