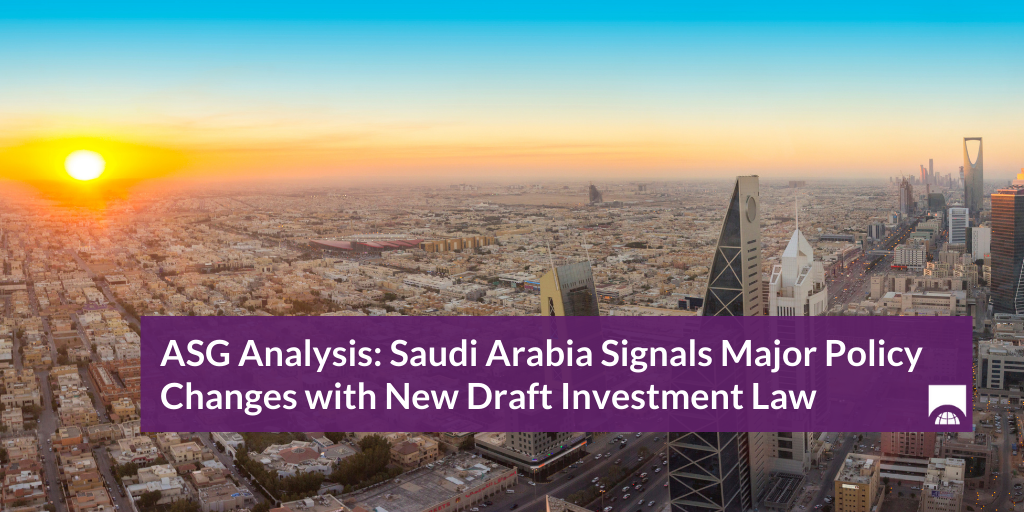 Broadly speaking, the draft law relaxes prior restraints on investment, strengthens investor rights and protections, streamlines regulatory requirements, and gives government authorities greater flexibility to negotiate with investors. Below are some of the most important themes and provisions of the draft law.

However, cutting against this message, Article 4 ends with a broad caveat: “The mere fact that action is taken (or an expected action is not taken) that may be inconsistent with an Investor’s expectations does not constitute a breach of this Article, even in cases which result in loss or damage to the interests of the Investor.” This may be merely an attempt by MISA to protect itself against frivolous lawsuits, but it could also weaken the investor rights and protections outlined above.

The draft investment law should be viewed in the context of broader developments in the Saudi investment landscape. Ahead of the annual Future Investment Initiative (FII) conference last October, the Kingdom unveiled its new National Investment Strategy (NIS) which sets highly ambitious targets for direct investment and the growth of the private sector. The NIS aims to increase private sector contribution to GDP to 65 percent, increase non-oil exports as a share of GDP from 16 to 50 percent, increase the investment-to-GDP ratio from 22 to 30 percent, and make the Kingdom one of the 15 largest economies in the world – all by 2030. To achieve these goals, the NIS calls for increasing annual foreign direct investment to SAR 388 billion (~$100 billion) and annual domestic investment to SAR 1.7 trillion (more than $450 billion) by 2030. The introduction of a new investment law designed to make the Kingdom more attractive to foreign investors is a natural next step in implementing the NIS.

Another key development in the Saudi investment agenda is the Regional Headquarters (RHQ) program launched by MISA last year, which plans to offer a variety of incentives to encourage multinational companies to establish their regional headquarters in the Kingdom (see our previous analysis). The launch of the RHQ program followed the February 2021 announcement that starting in 2024 companies with regional headquarters outside the Kingdom will no longer be eligible for government contracts. While there is still a great deal of uncertainty about the Saudi RHQ push – including with regard to how the Kingdom will implement the RHQ policy, what changes companies will need to make to their regional corporate footprints to comply, and exactly what incentives will be available – the program underscores the seriousness of Saudi ambitions to become a regional business hub.

Companies should also bear in mind the distinction between these broader efforts to attract foreign investment and big-ticket investment projects which will continue to be agreed on a case-by-case basis with significant involvement and support from senior Saudi leadership. The Supreme National Investment Committee, established last year to oversee the NIS and chaired by Crown Prince Mohammed bin Salman, is focused on coordinating government efforts to negotiate major investment deals. For example, California electric vehicle-maker Lucid Group (which is majority-owned by the Saudi Public Investment Fund) signed a deal last month to build its first international manufacturing plant in the King Abdullah Economic City outside Jeddah. This is just one example of a high-profile deal that received special support from the Saudi government, with several others in the pipeline.