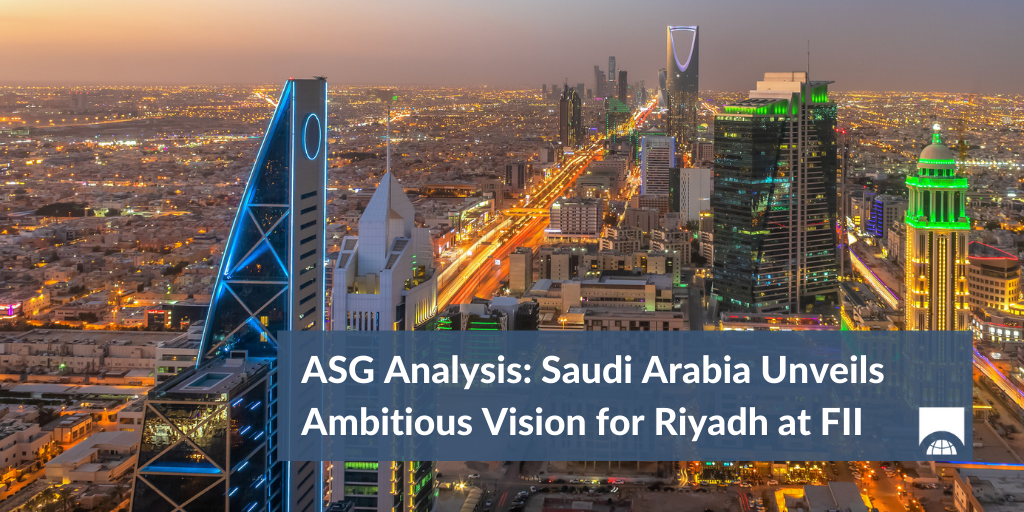 In a televised conversation with former Italian Prime Minister Matteo Renzi, MbS outlined ambitions to double the population of Riyadh from 7.5 million to 15-20 million, raise Riyadh from the 40th largest to one of the 10 largest cities in terms of economic output, and make it a regional hub for investment and tourism – all by 2030. According to Fahd Al-Rasheed, the president of the Royal Commission for Riyadh City (RCRC), the Saudi government has already spent or earmarked $220 billion for projects in and around the city, with the rest of the required capital expected to come from the private sector.

Asked to explain the focus on Riyadh, MbS indicated that the government sees investing in Riyadh as the easiest and most effective way to generate economic growth. The Crown Prince noted that the city already accounts for nearly 50% of the Saudi non-oil economy and 30% of the Saudi population, and that the costs of job creation in Riyadh are nearly 30% lower than elsewhere in the Kingdom. He drew a distinction between Riyadh and the gigaproject Neom – where the priorities are population growth and economic development – and other Saudi cities, where the focus is on improving quality of life.

The government is also betting heavily on major infrastructure projects, several of which are already under development. In  2019, King Salman announced four “grand projects” in Riyadh – King Salman Park, a public park on the grounds of the old Riyadh airport that will be three times the size of Central Park in New York City; Riyadh Green, an ambitious urban forestation project that envisions planting 7.5 million trees across the city; Riyadh Art, which aims to turn the city into a giant outdoor art gallery; and Riyadh Sports Boulevard, a road traversing the city with routes for cars, pedestrians, cyclists, and even horse riders. There is also the Diriyah Gate project, which envisions turning the UNESCO site of Diriyah on the outskirts of Riyadh into a tourism and entertainment destination, as well as the long-awaited Riyadh Metro, which is expected to partially open in the third quarter of this year.

MbS’ announcement of the Riyadh Vision came less than a month after he unveiled plans for “The Line,” a utopian 170km-long city running through Neom from the Red Sea to the Saudi city of Tobruk. Billed as a “revolution in urban living,” The Line will have a population of one million from around the world and no roads or cars. Planners claim that it will take no more than 20 minutes to get from one end of The Line to the other, thanks to unspecified “ultra-high-speed transit and autonomous mobility solutions.” Saudi Arabia plans to leave the rest of Neom – an area almost the size of Belgium straddling the borders of Saudi Arabia, Jordan, and Egypt – largely untouched.

What is still unclear

The ambitious targets and lack of details in the Riyadh Vision raise questions about how the Kingdom will pay for the project, how it plans to attract so many new residents so quickly, and how the project aligns with other Vision 2030 goals. The Crown Prince said that the government will release a more detailed strategy soon, which may shed more light on some of these questions.

One obvious question is how the Kingdom will pay for this massive expansion of Riyadh. The $220 billion already earmarked by the government for projects in and around Riyadh is a high price tag even by the standards of other Vision 2030 projects. While the PIF has deep pockets, it also has many other demands on its capital, including the $100-200 billion it expects to spend on The Line. The ability of the PIF to finance the Riyadh Vision and other Vision 2030 projects hinges in part on the success of its equally ambitious plan to grow its portfolio from roughly $350 billion today to nearly $2 trillion by 2030.

An even bigger question mark hangs over the government’s claim that most financing for the Riyadh Vision will come from the private sector. The government has made similar claims in the past about other Vision 2030 projects, including Neom, arguing that major up-front public investment will spur even larger private sector investment in the long-term. However, private sector dollars have been slow to materialize despite government efforts to improve the investment climate and attract foreign investors. The announcement that 24 companies will move their regional headquarters to Riyadh certainly made a splash, but time will tell whether the Kingdom can sustain this trend and parlay it into larger, longer-term commitments by the private sector – especially given that Dubai remains the first choice for companies looking to establish headquarters in the region.

The government appears to be banking on a virtuous circle whereby population growth spurs demand for world-class infrastructure and services (healthcare, education, culture, entertainment, etc.), which in turn attract more people to the city. As MbS explained, demand for high-quality services will “create matching supply.” This is notably different from the build-it-and-they-will-come approach pioneered by Dubai, which Saudi Arabia is hoping to use to similar effect with gigaprojects like Neom, building megacities from scratch in the desert in the expectation that residents and tourists will follow.

Finally, there is the question of how to situate this project in the context of other Vision 2030 priorities. Saudi Arabia has sought in recent years to increase employment of Saudis through localization requirements, often at the expense of corporate profits due to high fees on foreign labor. Now, the government appears prepared to issue sweeping localization exemptions to companies that relocate their headquarters to Riyadh, which would remove a major barrier to foreign investment in the Kingdom but could also be counterproductive to the Kingdom’s localization agenda.

While many questions remain unanswered and it will take time for plans around the Riyadh Vision to solidify, companies that are open to increasing their presence in Riyadh (even if they do not intend to relocate their headquarters), or are already planning to do so, should consider proactively engaging with the RCRC to explore potential win-win partnerships. Beyond rumored tax and localization breaks, the Crown Prince’s emphasis on Riyadh during FII shows that the RCRC has strong backing at the most senior levels and will likely be very influential. If companies gain the RCRC as an ally and partner, they may be able to leverage that relationship to help mitigate other regulatory issues they may encounter and to strengthen their overall positioning in the Kingdom.