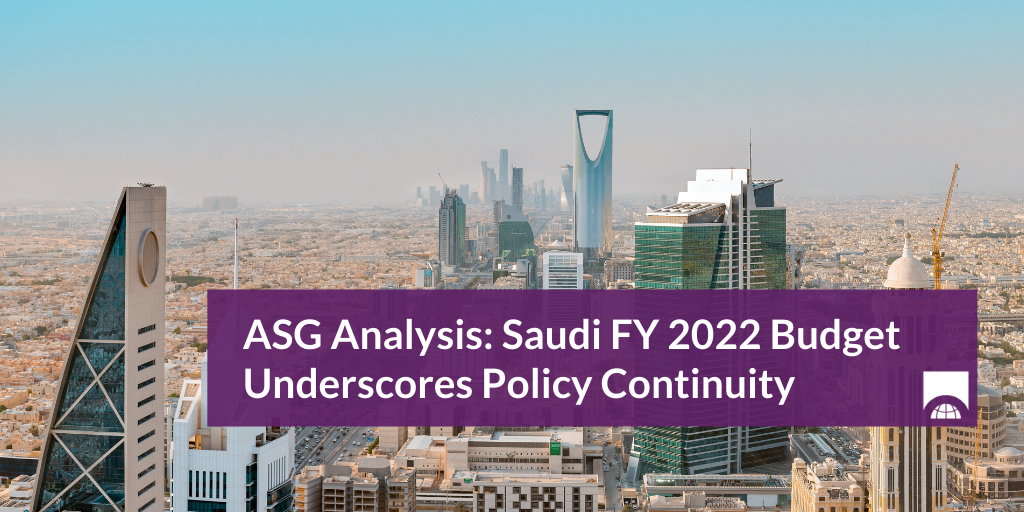 Since the launch of the Fiscal Balance Program (now the Fiscal Sustainability Program) six years ago, Saudi government efforts to increase spending efficiency and improve revenue collection have gradually reduced the budget deficit from nearly 16 percent of GDP in FY 2015 (amid the global oil price crash) to an estimated 2.7 percent of GDP in FY 2021. Although the deficit spiked to 11 percent of GDP in FY 2020, the Kingdom has largely succeeded in containing the fiscal impact of the pandemic – both by increasing non-oil revenue collection (most notably tripling the VAT from 5 to 15 percent) and by cutting some capital expenditures and subsidies. This has helped to offset oil revenue losses as well as increased spending on public health and economic stimulus measures during the pandemic.

Contrary to earlier speculation that the Saudi government would loosen constraints on public spending in response to rebounding oil revenues, the FY 2022 budget signals that the Kingdom intends to stay the course of deficit reduction. Next year, the Kingdom anticipates achieving its first budget surplus since 2013, thanks to a modest decrease in topline spending and a larger increase in revenues. At SAR 955 billion (~$255 billion), total budgeted expenditure for FY 2022 is down 3.5 percent and 6 percent, respectively, from budgeted and actual expenditure in FY 2021. This extends to most sectors, including the three largest sectors by expenditure: education (down 3.2 percent), defense (down 10.2 percent), and health care and social development (down 27.6 percent). Only “general items” (up 39 percent), which includes pension and social insurance contributions, and “security and regional administration” (up roughly 2 percent) will see budgeted expenditure increases.

Meanwhile, total revenue is expected to increase by roughly 12 percent year-over-year in the baseline scenario, driven largely by increased oil revenue. According to Saudi asset manager Jadwa Investment, the baseline scenario is consistent with a Brent crude price of around $70-75 per barrel, though the Saudi government has not released the details of its methodology. This assumes, of course, that the omicron variant does not have a substantial impact on oil markets. In contrast, non-oil tax revenues are expected to decline marginally. This can largely be attributed to changes in how VAT is calculated on government contracts. Importantly, the overall VAT rate will remain unchanged at 15 percent.

In the medium and long term, the Kingdom plans to roll out a number of new financial rules as part of the next phase of the Fiscal Sustainability Program. The budget document mentions plans to set a ceiling on government expenditure based on (1) “structural oil revenue” estimates (which take into account long-term historical averages, net of cyclical effects) and (2) estimates of non-oil revenue pegged to a certain percentage of non-oil GDP. The Saudi government believes that setting strict limits on spending will enable it to maintain fiscal surpluses over the long term and redirect these surpluses to expand reserves, pay down public debt, and invest in strategic initiatives.

The FY 2022 budget also reflects the government’s continued focus on promoting private sector growth and job creation through domestic and foreign investment. While total capital expenditure (“capex”) will decrease by approximately 18 percent year-over-year in FY 2022 to SAR 112 billion (~$30 billion), total investment (including capex plus investments by the Public Investment Fund (PIF), National Development Fund (NDF), and other entities) will increase by 12 percent to SAR 686 billion (~$183 billion). This underscores the dominant role of the PIF and NDF in financing strategic investments in economic diversification, including various Vision 2030 projects (discussed in more detail below).

The FY 2022 budget statement echoes the highly ambitious targets for investment and private sector economic contribution set forth in the new National Investment Strategy (NIS). Unveiled in October in the leadup to the PIF-organized Future Investment Initiative (FII) conference, the NIS aims to increase private sector contribution to GDP to 65 percent, increase non-oil exports as a share of GDP from 16 to 50 percent, increase the investment-to-GDP ratio from 22 to 30 percent (and raise the FDI-to-GDP ratio to 5.7 percent), and make the Kingdom one of the 15 largest economies in the world – all by 2030.

To achieve these goals, the Kingdom aims for SAR 12 trillion (~$3.2 trillion) in cumulative investments by 2030. The largest share would come from the Shareek (“Partner”) program announced in March 2021, which aims to build partnerships between the public sector and select Saudi companies. So far, 24 companies, most of them listed firms in which PIF is a shareholder, have pledged to invest a total of SAR 2 trillion (~$530 billion) by 2025 and another SAR 3 trillion (~$800 billion) by 2030. Aramco and its petrochemical manufacturing subsidiary, Saudi Basic Industries Corporation, are expected to contribute 60 percent of this amount. The remaining SAR 7 trillion (~$1.87 trillion) in targeted investment by 2030 includes SAR 3 trillion (~$800 billion) in direct investment from PIF and roughly SAR 4 trillion (~$1.1 trillion) in new investments through the NIS, roughly half (SAR 2 trillion) in the form of FDI. It is worth noting that the Shareek program is still in its very early stages, and it is unclear how real the above commitments are or how soon they would begin. ASG is not yet aware of any solid investment projects in the program’s pipeline.

Another key pillar of the Kingdom’s long-term investment strategy is the Regional Headquarters (RHQ) Program announced earlier this year, which seeks to increase FDI by making Riyadh the leading regional hub for multinational company headquarters (see our previous Analysis). To convince companies to relocate their headquarters to the Kingdom, the program is leveraging a combination of incentives (such as relaxed localization requirements and accelerated visa approvals) and pressure (notably a decree that companies with RHQs outside of the Kingdom will no longer be able to bid on government contracts starting in 2024). However, as with the Shareek Program, the RHQ Program is still in its early stages – it is still unclear what exact incentives companies can expect in return for relocating their RHQs or how the Saudi government plans to implement its ban on contracting with companies headquartered elsewhere.

Finally, the FY 2022 budget reflects continued high levels of spending on structural transformation efforts under Vision 2030, including the Vision Realization Programs (VRPs), giga-projects, and other large investment projects. The budget estimates that total capital expenditure on the VRPs (of which there are now more than a dozen) and giga-projects (of which there are now six) will decline by roughly 18 percent compared to 2021 projections, but that does not necessarily mean that these programs will have lower budgets. Rather, ASG believes that this may reflect efforts to shift a greater share of the financing burden to the PIF in the near term and to increase private sector contribution in the longer term.

In recent months, the Kingdom added to its portfolio of VRPs and giga-projects. In September, Saudi Arabia announced its newest VRP, the Human Capital Development Program (HCDP), after repeated delays and changes in ownership. The HCDP envisions sweeping reforms across K-12, higher education, and vocational training. Initiatives include revamping school curricula, raising teaching standards, enabling investment in private schools, attracting leading international universities and vocational training institutions, refreshing higher education degree programs, and introducing upskilling and reskilling programs for adults. Meanwhile, in the leadup to the FII conference in October, the Kingdom unveiled a new giga-project, “The Rig,” envisioned as a massive offshore tourism and entertainment destination built on a platform resembling an oil rig in the Arabian Gulf.

The Kingdom has also issued ambitious new climate change commitments that underscore a growing focus on sustainability across government. Ahead of the UN Climate Change Conference (COP26) in Glasgow in November, Crown Prince Mohammed bin Salman (MBS) announced that the Kingdom aims to more than double its carbon emissions reduction target to 278 million tons by 2030, reach net-zero emissions by 2060, and increase protected areas within the Kingdom by 30 percent. The crown prince also announced the launch of the Middle East Green Initiative, a massive $10.4 billion afforestation project that aims to plant 50 billion trees across the Middle East (including 10 billion in Saudi Arabia alone). These initiatives are a priority at the highest levels of government and will receive substantial financing support.

The improving macroeconomic and fiscal picture, buoyed by rising oil and non-oil revenues, is undoubtedly a positive development for foreign companies doing business in the Kingdom. Saudi government entities will be better able to refocus on long-term strategic projects as pandemic-related demands on government attention and spending recede, although the omicron variant remains a source of near-term uncertainty for the Kingdom’s economic and public health outlook. Looking ahead, the Kingdom’s eagerness to attract FDI presents opportunities for companies that are willing to consider significant increases in investment in the country and enter into direct negotiations with the government for tailored incentives. We see particularly strong commercial opportunities for companies that can position themselves as partners to the government in achieving its goals in priority sectors like tourism, entertainment, education, health care, and sustainability.

However, the latest budget also underscores the long-term paradigm-shift toward fiscal restraint and spending efficiency in the Kingdom. In anticipation of more cost-conscious government procurement, companies should carefully craft their value propositions to stress cost-competitiveness and quality over prestige and brand recognition. While price may be the overriding factor in procurement decisions, companies should also stress their desire to be good corporate citizens and to support the Kingdom’s transformation plans. Proactive long-term commitments to local content, job creation, knowledge transfer, and other Saudi government priorities will help to garner goodwill and strengthen companies’ arguments about the superior overall value they bring relative to cheaper competitors.