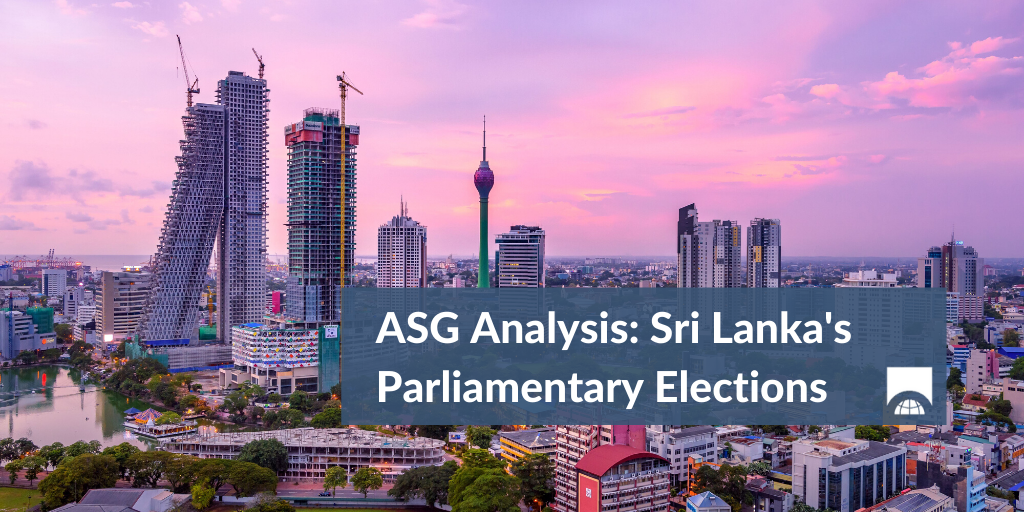 Major election themes: All about the economy

The economic fallout from Covid-19 has compounded Sri Lanka’s existing revenue crisis. Tourism, retail apparel, and informal sectors collapsed in the wake of the pandemic, and the country is facing a crisis of tanking remittances as migrant workers have returned from the Middle East and Southeast Asia. In response, Sri Lanka’s Central Bank announced restrictions for outward remittances to preserve its foreign currency reserves.

Sri Lanka must pay back approximately $4.8 billion in foreign debt in 2020, and President Rajapaksa has appealed to the IMF and World Bank for relief. Foreign debt makes up roughly half of the nation’s GDP. Mahinda Rajapaksa steered Sri Lanka politically and financially toward China, incurring billions of dollars in debt to Beijing in the process. However, much of Sri Lanka’s debt is also owed to the U.S. and India, making fears over an intimate relationship with China slightly overblown.

Regardless of the election outcome, debt repayment risks will almost certainly remain high in the coming year as a result of the economic fallout of Covid-19, and Sri Lanka risks losing its GSP status if human rights violations persist.

To meet its current debt obligations, the government will need to pass long-term structural reforms. President Rajapaksa’s announcement last November of tax cuts for big business was aimed at promoting growth, but generated concerns about the country’s ability to meet its debt obligations.

If Sri Lanka’s human rights situation worsens, there is a risk that the EU revokes the country’s Generalized Scheme of Preferences (GSP) status. Sri Lanka was removed from the GSP+ in 2010 due to human rights concerns but was reinstated in 2017. If the government fails to meet the human rights and policy commitments it made to re-secure its GSP status, it risks losing it once again.

As ethnic divides grow in Sri Lanka and are enflamed by the Rajapaksa brothers in the lead up to and following the elections, Sri Lanka could experience increased online hate speech, large scale protests, civil unrest, and violence – including a potential return to armed conflict. Ethnic divides and distrust of the government are particularly pronounced for ethnic Tamils and Muslims.

As President Rajapaksa consolidates power with diminished oversight from parliament, civil ministries, and the media, Sri Lanka will likely experience decreased independence of state institutions, selective enforcement of laws, and a general lack of oversight and accountability.

Ruling Without Parliamentary Oversight: President Rajapaksa dissolved parliament on March 2 and has since been operating without parliamentary oversight. Under Sri Lanka’s constitution, elections to form a new parliament must be held within three months of dissolving parliament. President Rajapaksa pushed the new elections until August 5 (over two months past the required date), prompting judicial challenges by the SJB and civil rights groups, which the Supreme Court subsequently dismissed. If elections are rescheduled past August 5, there is a risk that President Rajapaksa continues to rule without oversight, reflecting a weakened judiciary.

Increased Militarization: President Rajapaksa has brought a number of civilian ministries under military control and created seven task forces composed mostly of members of the military and Sinhala Buddhists. These task forces operate under vague mandates, which creates concern about transparency, accountability, unilateral policymaking, and overlapping responsibilities with civilian ministries.

Sri Lanka is still recovering from a decades-long civil war that ended in 2009. Since President Rajapaksa’s election, he has refused to pursue post-war accountability and reconciliation for alleged human rights violations. He withdrew cosponsorship of related a 2015 UN Human Rights Council Resolution and rejected key UN-endorsed measures to address the war’s legacy, calling them a betrayal of the nation’s “war heroes.”

Anti-Muslim rhetoric in Sri Lanka rose in the wake of the Easter Sunday bombings on April 21, 2019 (carried out by ISIS) and escalated into a series of riots targeting Muslims. Toward the beginning of the Covid-19 crisis, Sri Lanka mandated cremations for Covid-19 victims, a practice that is unacceptable in Islam. Progovernment media has disproportionately focused on infections in Muslim areas of the country, and Sinhala nationalist groups have used social media to attribute the spread of Covid-19 in Sri Lanka to Muslims.

President Rajapaksa has encouraged investment from foreign powers including China, India, Japan, Singapore, and Australia and has singled out infrastructure, transportation, and IT as priority sectors for investment. Sri Lanka has previously been scrutinized for its political and commercial relationships with China. President Rajapaksa has been cautious in appearing too close to China and is keenly aware of global competition for influence in Sri Lanka. He seeks to leverage the nation’s position by attracting investment from all sides. Sri Lanka’s economy relies heavily on trade with the U.S. and India, as well as with Japan and the EU.

While appealing for foreign investment, President Rajapaksa has also passed protectionist policies that deter foreign involvement in the manufacturing sector. He expanded import control measures on nonessential goods and provided loans at low interest rates to support domestic manufacturing. He will likely continue to pass protectionist policies to shield domestic industries while advocating for increased foreign investments in other sectors.

SLPP has a strong advantage going into the August 5 parliamentary elections, particularly given the split opposition and the popularity of President Rajapaksa’s successful Covid-19 response. An SLPP majority parliament would present the following significant investment opportunities for investors:

Infrastructure and Transportation: President Rajapaksa plans to launch an accelerated urban development drive centering on Colombo. The government is looking for foreign investment to avoid taking on additional loans. This project will likely focus on traffic issues and railroad infrastructure development.

Technology: President Rajapaksa committed to introducing data protection legislation in his election manifesto. It is unclear whether a change in parliamentary leadership and a new government will alter the form and substance of the proposed Personal Data Protection Bill. President Rajapaksa has welcomed foreign investment in the sector and said he wants to increase efficiency in the public sector and integrate technology into government institutions.

Services: In April 2019, bombings carried out by ISIS and ensuing security concerns severely damaged Sri Lanka’s tourism sector. Just as the massive sector – which makes up roughly 12.5 percent of the country’s GDP – was recovering, Covid-19 has decimated it again. Reviving tourism and attracting investments will be a priority for the incoming government.

Telecommunications: Sri Lanka’s mobile broadband penetration has strongly increased over the last several years and the country is now preparing to move from 4G to 5G mobile devices. Sri Lanka is building a national fiber network that will serve as the foundation for fixed broadband and mobile services.

President Gotabaya Rajapaksa and Prime Minister Mahinda Rajapaksa have consolidated power and integrated the military into the top civilian ranks of government.

President Gotabaya Rajapaksa, the Sinhalese-Buddhist nationalist party candidate, won the presidential election last November with roughly 52 percent of the vote. He was supported primarily by the Sinhalese Buddhist majority, while his competitor – Sajith Premadasa – was the favorite of Tamil and Muslim minority parties. As a former defense secretary during the Sri Lankan civil war, some view Gotabaya as tough on national security. Others, however, have called the president a war criminal for his crackdown during the defeat of the Tamil Tigers.

Prime Minister Mahinda Rajapaksa served as president from 2005 to 2015 and is President Gotabaya’s brother. His tenure as president was marked by a brutal defeat of the Tamil Tigers and the cultivation of a close relationship with China, which left Sri Lanka with significant debt to Beijing.

The Sri Lanka Podujana Peramuna Party (SLPP) is the Rajapaksa brothers’ Sinhalese political party. It is likely to win a majority in the parliamentary elections, given a fractured opposition and high approval ratings resulting from President Rajapaksa’s government’s successful Covid-19 response.

The role of the military in government and politics is growing

The military has taken on a more prominent role since President Rajapaksa’s election and his subsequent appointment of 18 retired and active military officials to senior positions in civilian departments. Many of the military officials are alleged to have committed human rights violations during the civil war. The military also leads the country’s Covid-19 response with army commander Lt. Gen. Shavendra Silva as head of the newly formed National Operation Center for Prevention of Covid-19 Outbreak.

The Buddhist clergy have actively supported President Rajapaksa, and vocal Buddhist militants have called for an all-Sinhalese government. Gotabaya recently agreed to form a military-led all-Sinhala task force to “protect” Buddhist heritage sites in the eastern province. These sites are historically inhabited by Tamils. This effort indicates the deepening relationships between civil, military, and Buddhist authorities.

Conflict between Wickremesinghe’s and Premadasa’s internal factions led to a party split in February. In the upcoming parliamentary elections, a majority of former UNP coalition legislators will be running as SJB party members.

The Samagi Jana Balawegaya (SJP) is a political alliance formed by Sajith Premadasa following the UNP split. The alliance was recognized as an official political party in February and is considered the SLPP’s main opposition in upcoming parliamentary elections. Premadasa contested President Rajapaksa in the November elections, and was the favorite among Tamil and Muslim minority populations.