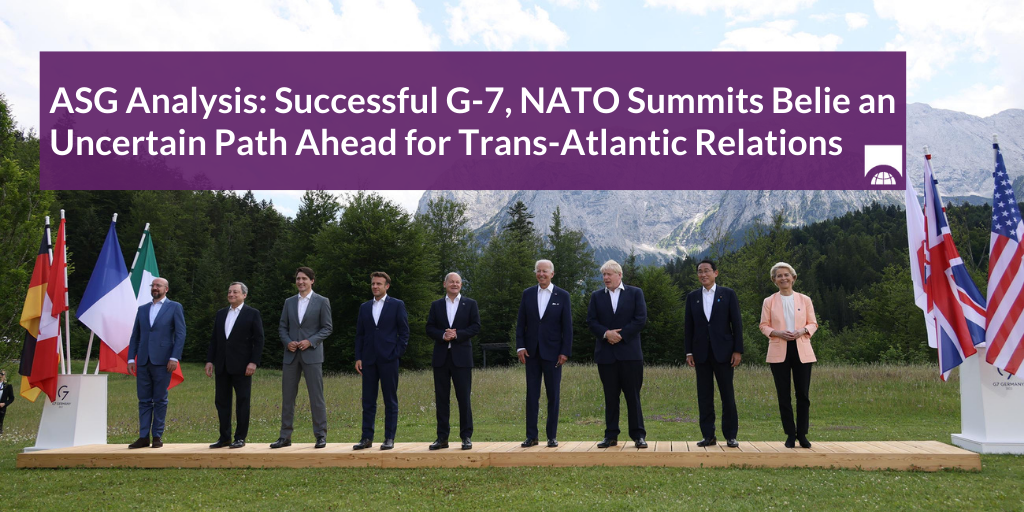 Last week, President Biden completed a whirlwind tour in Europe, attending the Group of 7 and NATO summits. The visit came at a crucial moment for the West amid a new phase in Russia’s brutal war in Ukraine, rising global food insecurity, spiking energy prices, disrupted supply chains, and a wavering economic recovery. On the ground, the trip solidified the trans-Atlantic relationship, adding credence that the relationship is stronger today than perhaps at any other point in modern times with near-continuous close contact at all levels of government and renewed mutual trust. Even so, several factors could jeopardize the current trans-Atlantic bonhomie, ranging from hesitation to support Ukraine in the event of a dragged-out war to looming political changes and instability, especially in the U.S. and U.K.

The G-7 Leaders’ Summit, held from June 26 to 28 in Schloß Elmau, Germany, culminated the group’s unprecedented level of cooperation and unity since the start of the war in Ukraine. Before the summit, officials privately noted that the war had accelerated initiatives that may not have otherwise been possible, leaving leaders with few new deliverables left to announce. In particular, the G-7 has served to coordinate closely on sanctions between the EU, the U.K., the U.S., and Japan in response to Russia’s invasion. Therefore, much of the summit's final communique and annexes came as no surprise, as prior ministerial meetings had already teed up progress. Despite these successes, however, the leaders arrived in Germany battered by domestic politics. At home, Biden faces possible defeat in the midterms and embarrassing Supreme Court decisions; Macron lost his parliamentary majority; Johnson faced a no-confidence vote and continued calls for his resignation; Scholz is losing support for his uncertain leadership; Draghi has a fragile grand coalition fraught with infighting; and Trudeau’s Liberals are facing strong opposition from both the left and right. On the brighter side, Japan’s government is going into its G-7 presidency next year in a strong domestic position.

From a U.S. perspective, ensuring strong unity on support for Ukraine “in all aspects and for as long as it takes” was a top priority going into the summit according to officials. As expected, the leaders looked to contradict recent reports that some countries, France and Italy included, had been looking for ways to end the war quickly by pressuring Kyiv to reach a compromise. President Zelenskyy addressed the leaders virtually, asking for more equipment, a request that the U.S. is already looking to meet, and sharing his desire to shorten the war, hoping for an end by winter. As expected, no new major sanctions announcements were made with the notable exceptions of a new ban on Russian gold exports, new restrictions on high-tech exports to Russia, and more action to combat sanctions evasion. Just before the summit, the European Council endorsed Ukraine’s EU candidacy in a symbolically important move. Leaders also discussed the reconstruction of Ukraine – which will require massive public and private investments from the West – including committing to exploring the use of frozen Russian assets toward this end. At an international conference in Lugano held in early July, representatives of 40 countries and organizations reiterated support for reconstruction, which is estimated to cost up to $750 billion. The U.S. separately secured a win at the G-7 by getting other members to commit to strong wording on China in the final communique, including language condemning China on human rights and calling for reducing strategic dependencies and boosting economic resilience.

While climate was supposed to be a top priority for the German G-7 presidency, the climate agenda has clearly taken a back seat in discussions over the rising cost of energy and need to speed up reduction of Russian energy revenues. The “Climate Club,” a grouping of countries intended to create a low-carbon market to incentivize faster decarbonization exceeding Paris Agreement targets, was officially endorsed but, as rumored, breathing life into the idea was left to future working groups. ASG expects that Germany will emphasize standing up the Climate Club, Chancellor Scholz’s top priority, for the remainder of its G-7 presidency. Businesses in sectors likely to be affected – such as steel and cement – that hope to avoid new trade tariffs should pay close attention over the coming months. The new Just Energy Transition Partnership countries were announced, again to not much surprise: India, Senegal, Indonesia, and Vietnam will receive financing for targeted decarbonization plans.

Besides the G-7 leaders (including the EU), participants included Argentina, South Africa, Senegal, India, and Indonesia, to include Global South representation. The Partnership for Global Infrastructure Investment – Biden’s personal attempt to revive last year’s maligned Build Back Better World initiative – was launched to focus on sustainable investments and short-term wins to counter China’s growing influence in Africa and South America. The U.S. promised $200 billion and the EU €300 billion through its new Global Gateway initiative over the next five years, with a focus on clean energy, health systems, gender equality, and ICT. It remains unclear how much of this will be new money. Commitments to strengthening pandemic readiness were also reiterated, although health was less of a priority at this year’s summit.

One of the only new announcements was a commitment of $4.5 billion to global food security in response to the food crisis, building on the new Global Alliance on Food Security – which aims to respond to the immediate crisis but also tackle broader structural challenges in the global food system – among a constellation of other initiatives. Even so, the G-7 leaders received criticism for not taking any action to get Russia to lift its blockade of Ukraine’s Black Sea ports.

Overall, the summit’s lack of surprises can be attributed to the disciplined work of preceding meetings and a well-organized German presidency, despite a slow start at the beginning of the year when the new German government was still finding its footing. Ministerial and working group meetings have grown in breadth, scope, and quantity over the last few years, with each of their outcomes adding to the predictability of the summit conclusions. At the summit, key compromises were made as Japan did not support a zero-emissions vehicle target, Italy wanted to caveat ending international financing for dirty energy with short-term investments in fossil fuels for “limited circumstances,” and the U.S. and France sparred over the scope of an oil price cap, which is intended to hurt Russia but would also hurt U.S. and Canadian oil revenues. Work on the price cap has now been delegated to intense technical-level discussions between the U.S. and EU, in what is being heralded as a new potential geo-economic tool.

The NATO Summit in Madrid on June 29 and 30 provided leaders with another opportunity to present a united front in light of Russia’s war and reaffirm the alliance’s strategic position. At the core of the summit was the adoption of the much-anticipated Strategic Concept, a document that will define NATO’s view of global security challenges and drive modernization efforts for the next decade. In the concept, NATO allies identified Russia as the most significant threat to Atlantic security; included China as a “challenge” (a win for the Biden administration); and noted the risks posed by terrorism (a priority for France), cyberattacks, hybrid warfare, and climate change.

NATO leaders also announced a beefed-up 300,000-strong readiness force ready to be deployed along NATO’s border with Russia in the event of a crisis, in addition to more equipment and weapons stockpiles. President Biden announced a new permanent U.S. military presence in Poland (something Warsaw has requested for years) and, with allies, reaffirmed and strengthened the rotational presence on NATO’s Eastern flank. Finland and Sweden unlocked Turkey’s veto of their accessions, beginning a quick process for them to fully join the alliance. Allies also reaffirmed commitment to NATO’s Open Door membership policy, announced efforts to enhance its tech and cybersecurity capabilities, and held a series of discussions with Pacific partners, including Australia, Japan, New Zealand, and South Korea. Several of these partners have denounced Russia’s war in Ukraine, seeing it as a precedent for China and Taiwan.

Overall, the summit marked a crucial turning point for the alliance, showing its ability to adapt to new challenges and threats, an achievement far from the “brain death” Macron predicted less than two years ago. Despite concerns about U.S. commitment to NATO under President Trump, the Ukraine war has reminded European leaders of their complete dependence on Washington when it comes to defense, with NATO very likely to remain the bedrock of European security for years to come but with a need for European allies to assume more responsibility. Looking forward, NATO will have to adapt to its expanding membership, continue to forge stronger cooperation with the EU on security and defense matters, and turn the Madrid summit’s talk into concrete, deterrent action in the years to come.

Together, the G-7 and NATO summits reaffirmed support for Ukraine – the most pressing issue on leaders’ minds – while making incremental progress on dealing with the consequences of the war in terms of food insecurity and also addressing long-term challenges like climate, evolving security threats, and global health. While trans-Atlantic relations remain warm, the biggest challenges facing the West going forward are on the domestic and political fronts. It is unlikely that European partners see the future of the U.S. in the same bright light as they did at the beginning of Biden’s presidency. Worrisome recent news from Washington and the prospect of the midterm elections are considerations for European leaders, who are also feeling the pressures of inflation and political instability at home. In effect, the key takeaway of the summits was that no matter the progress made abroad, neither an idyllic Bavarian ski resort nor the halls of the El Prado museum could allow the leaders to escape the troubles and uncertainty of their domestic politics.