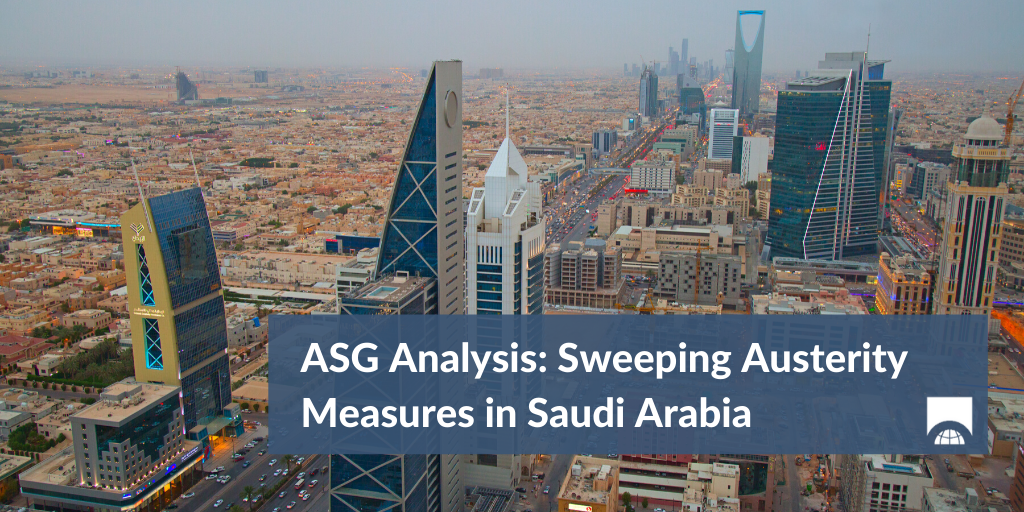 What do the cuts include?

The new austerity measures total SAR 100 billion ($26.6 billion), or roughly 10% of the original FY2020 budget, and include spending cuts and revenue increases:

Why are the cuts necessary?

As Minister Al-Jadaan noted, the COVID-19 pandemic has dealt three major financial shocks to the Kingdom, any one of which would necessitate government intervention:

What do the cuts mean for business?

The austerity measures are emblematic of a new focus on fiscal discipline under Vision 2030. Although the measures may postpone certain Vision 2030 initiatives and force the government to choose which programs to prioritize, the pandemic is unlikely to spur a significant shift in government strategy around Vision 2030. On the contrary, the pandemic-driven collapse in oil prices has highlighted the problem of oil reliance and underscored the importance of the Vision 2030 push to diversify the economy.

In the short- and longer-term, the austerity measures have several implications for companies that do business in the Kingdom. Delayed payment or non-payment on government contracts—a problem often caused more by mismanagement than lack of funding—is unlikely to be as significant a challenge as it has been in the past. Since the pandemic began, the government has moved to pay all its outstanding dues to contractors.

However, the government will likely be more selective and cost-conscious in procurement decisions. Companies should also anticipate a heightened focus on local content as the government faces growing pressure to create jobs for Saudis. Meanwhile, the VAT increase and larger economic slowdown will cut into consumer purchasing power and may prompt Saudi consumers to become more conservative in their spending habits.

For companies that do business with the government and those that sell to Saudi consumers, the prestige associated with American companies may increasingly pale in comparison to cost-effectiveness. Chinese companies have gained ground in recent years both with the Saudi government and with Saudi consumers. Greater concern with cost-efficiency may further entrench their competitive advantage.