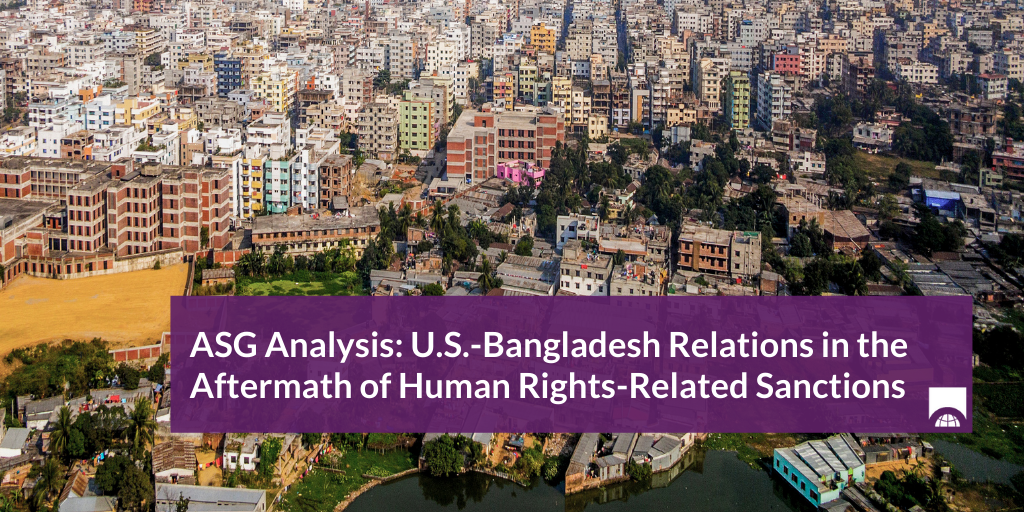 On December 10, 2021, the Treasury Department’s Office of Foreign Asset Control (OFAC) imposed sanctions against Bangladesh’s large, well-connected paramilitary force known as the Rapid Action Battalion (RAB), as well as seven current and former officers, for serious human rights violations. Treasury cited actions taken by the RAB, which violated the rule of law and human rights, as a threat to U.S. national security under the Global Magnitsky Act. Adding insult to injury, the announcement fell on the last day of the White House’s Democracy Summit; Bangladeshi Prime Minister Sheikh Hasina was not invited to the high-profile gathering, which was taken as an additional slight by the government.

OFAC’s actions against RAB came on the heels of earlier American efforts to prod Dhaka to hold the RAB accountable. The State Department sanctioned the elite group’s then-director general for the arbitrary killing of a Teknaf Municipality councilor in 2018. Ten U.S. senators also signed a bipartisan letter in October 2020 urging former Secretary of State Mike Pompeo to sanction the RAB for the group’s alleged role in targeting political dissidents. December’s announcement has received bipartisan support in Congress, frequently with the important condition that the sanctions remain focused on the RAB and are designed not to impact the broader U.S.-Bangladesh economic relationship.

RAB was founded by the Bangladesh Nationalist Party (BNP) government in 2004, and today is a paramilitary force with about 15,000 personnel from the police, army, navy, air force, and border security forces operating under the supervision of the Bangladeshi military and police. The structure has been embraced by Sheikh Hasina’s Awami League (AL) government after it took office in 2009. The RAB has two divisions: counterterrorism and counternarcotics. While the individual allegations highlighted by OFAC appear to relate to the counternarcotics division, it is also important to note that the RAB’s counterterrorism force was identified in the State Department’s 2020 “Country Report on Terrorism” as a partner in combatting extremism in the region.

Treasury cited reports by non-governmental organizations that allege RAB was responsible for 600 instances of forced disappearance since 2009, about 600 extrajudicial killings since 2018, and multiple instances of torture. The sanctions covered both RAB as an entity and seven individual leaders and officials from the group, including the current Director General Chowdhury Abdullah Al-Mamun, under Executive Order 13818. The sanctions also include Benazir Ahmed, who served as director general from 2015 to 2020 and currently serves as the inspector general of the Bangladesh Police, the country’s national police force.

The sanctions have caused significant, but we believe temporary, disruption to U.S.-Bangladesh relations. Prime Minister Sheikh Hasina’s government continues to view RAB as critical to national security and has tried to rally to its support since the sanctions. Dhaka summoned former U.S. Ambassador to Bangladesh Earl Miller to condemn the sanctions as an effort by the U.S. to undermine the country’s domestic security forces. In a letter to Secretary of State Antony Blinken, Foreign Secretary Masud Bin Momen urged the United States to waive the sanctions.

Part of Bangladesh’s frustration stems from a believed inconsistency in the U.S. approach. Bangladeshi officials have pointed to police brutality cases in the United States as an example of an analogous set of actions to shore up public support for the RAB and the government’s stand. The Awami League has also accused the BNP-led opposition and non-governmental organizations of distributing information designed to deceive foreign governments and undermine Prime Minister Sheikh Hasina’s government.

The sanctions’ timing was also awkward for Dhaka. Bangladesh is in the middle of trade discussions with the European Union due to its expected graduation from “least-developed country” to developing country status as soon as 2026, which would render it ineligible for access to the EU’s Generalised System of Preferences Plus (GSP-Plus) program. To demonstrate the government’s sincerity in response to the sanctions, Bangladesh’s foreign ministry announced the creation of a human rights cell within its U.N. office. While the move suggests a new seriousness about the situation, it remains to be seen whether it signals a departure from prior denials over the RAB’s rights record and the Hasina government’s autocratic tilt. The preferential access afforded to Bangladesh’s textile sector under GSP-Plus has been vital to the country’s sustained high growth trajectory in recent years. Despite calls by some in the European Parliament to follow the U.S. example, the EU has clarified there will be no impact on business ties.

Business risks and next steps

Though human rights concerns remain a priority for the Biden administration in Bangladesh, the likelihood for further U.S. sanctions appears low, unless related levels of violence markedly increase. Bangladesh is a significant player in the White House’s expanding Indo-Pacific strategy, and U.S. officials are likely wary of the growing Chinese presence in the country as well. Sheikh Hasina’s government continues to be an important counterterrorism partner and has also been a host to more than a million Rohingya refugees from Myanmar in recent years.

The political risk for U.S. business operations in Bangladesh bears monitoring, but the sanctions are likely a short-term setback for the U.S.-Bangladesh bilateral relationship. Bangladesh is poised to grow at 7.5 percent in 2022 according to the IMF, which means it will remain one of the region’s fastest-growing economies. Under Secretary of State for Political Affairs Victoria Nuland’s much anticipated visit to Dhaka for the 8th U.S.-Bangladesh partnership dialogue reportedly sometime in March offers an opportunity to clear the air and chart a way forward on U.S. human rights concerns, while advancing mutual security and commercial interests.