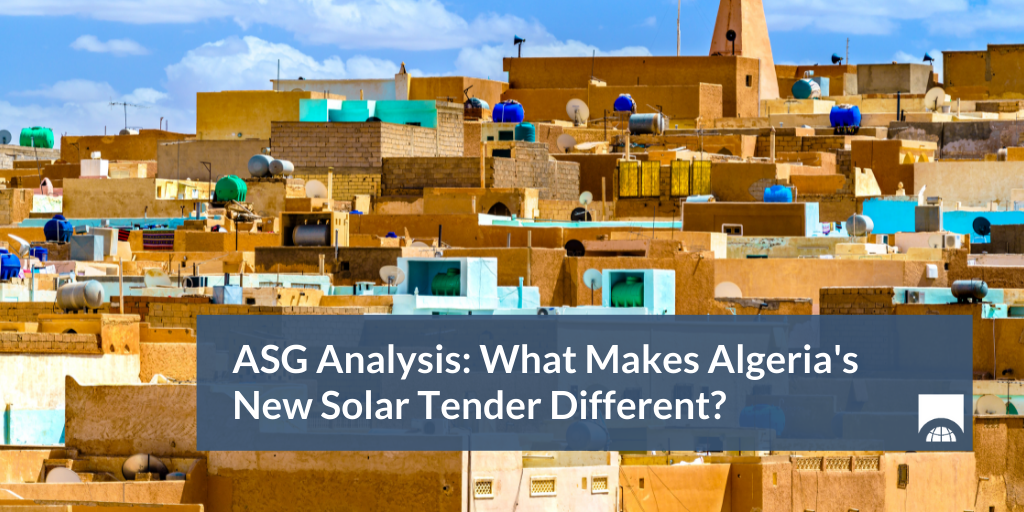 In April, Algeria announced plans to launch a tender this summer for a gigawatt (GW) of photovoltaic solar power production. Solar project announcements in Algeria have a spotty record – a 4GW tender announced in 2017 never materialized, a 1GW project assigned to the national hydrocarbons company has seen limited progress, and an attempt to tender 150 megawatts (MW) of solar energy locally did not successfully award all lots. Investors are asking: What might be different this time?

If this time is the real deal, investors do not want to be late to the party. Algeria is the largest country in Africa, by geography. It has massive solar potential, sharply rising energy demand, and one of the highest per-capita gross domestic product (GDP) levels on the continent. Algerian officials often spend significant time vetting potential partners up front, but once they make a choice, they tend to stick with it. There are several points that firms hoping to capitalize on this opportunity and others in Algeria should keep in mind.

First – foreign companies can now hold majority ownership in these projects, which is a game-changer. Many international businesses had identified Algeria’s so-called “51/49 rule” (which required majority Algerian ownership of any business venture) as a stumbling block for international investment. While 51/49 still applies to “strategic sectors” such as hydrocarbons and mining, the government has declared renewable energy investment free from such restrictions. Investors are likely to find this change liberating. The Algerian government stands to benefit too, as it was partly lack of project funding that hampered previous solar project attempts. The Algerian government was either unwilling or unable to dedicate the necessary funds to conclude previous announcements of 3GW or 4GW tenders. If foreign funds can now flow more freely, this could eliminate that hurdle. The government’s growing fiscal deficit and declining export revenues increase its openness to foreign investors who bring their own funding.

Second – currency convertibility remains a consideration. The Algerian dinar remains tightly controlled and its non-convertibility continues to be a key source of risk. Investors should pay close attention to the tender specifications regarding currency for pricing and payment. While Algerian authorities continue to discuss liberalizing currency controls, the current reality remains that businesses will want to consider carefully how they would move funds in or out of the country under current legislation, as well as how to manage risk should currency liberalization significantly impact the dinar’s value.

Third – investing in Algeria requires understanding the Algerian bureaucracy. In Algeria this means understanding not just traditional government ministries, but also the large parastatal companies that comprise the energy sector. 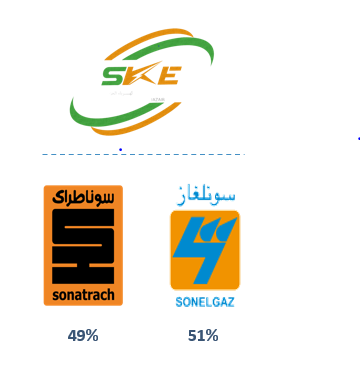 Last month, Algeria created a new state-run subsidiary, Sharikat Kahraba El Djazaïr (SKE), which authorities indicate will spearhead the new solar tender. SKE is a joint venture consisting of 49% Sonatrach (the national oil company) and 51% Sonelgaz (the national electric utility). The government hopes to unite Sonatrach’s access to funding (as the source of the oil and gas that accounts for 95% of Algeria’s exports) and Sonelgaz’s expertise in electric grid management. Algerian energy analysts have expressed hope that this combined Sonatrach-Sonelgaz effort will bear fruit where separate efforts have not, but also skepticism about SKE’s prospects, given the creation of another bureaucratic body might not be the most efficient way to ensure smooth cooperation.

With the involvement of state-run enterprises, large decisions must ultimately be traced back to government ministries. The specific government ministries and regulatory mandates involved in the many moving pieces of a successful solar energy project continue to evolve. Businesses interested in renewable energy in Algeria have complained for years about confused lines of authority that have created uncertainty and stymied investments.

For example, Algerian authorities in 2017 attempted to assign responsibility for renewable energy to the Ministry of Environment (making it the “Ministry of Environment and Renewable Energy”). However, that Ministry struggled to exercise authority over issues that the Ministry of Energy – overseer of Algeria’s national energy companies – viewed as its turf. The new Ministry of Energy Transition and Renewable Energies (METRE), created in 2019 and vested with formal legal authority over renewable energy just last month, may have wrested some control over these issues. This could mean that the current METRE Minister will be more capable of creating the clear, stable environment for renewable energy that is conducive to long-term investment. Indeed, METRE officials recently noted their intention to have sites for the solar projects pre-identified, with all necessary land permits prearranged so investors would be saved the trouble of coordinating across the multiple government bodies that are involved in such permissions. At the very least, Algerian authorities recognize confused lines of authority has been an issue and are seeking to address this concern.

Fourth – questions about grid modernization remain. Sonelgaz, the national electric utility, remains interested in upgrading its current electric network and may choose to employ smart metering technology. The more that solar projects are connected to Algeria’s northern grid – versus projects akin to distributed energy in the vast and sparsely populated south – the more important decisions and capability to modernize the grid become.

Fifth – it is critical to understand Algeria’s political context, given its direct impact on economic decisions. In Algeria, the state energy companies are the lifeblood of the economy, which itself is state-dominated and run. The government’s geopolitical realities have a direct line, therefore, to economic decisions that in other places might be driven purely by profit motive. For example, the government decision to open certain sectors to majority foreign ownership can be traced to plummeting foreign exchange reserves, which in turn can be traced (in part) to increasing domestic consumption of gas for electricity versus export. While government officials recognize the need to reform massive energy subsidies that contribute to growing local consumption, they will be loath to implement planned changes to adjust the current program; instead, they will prioritize preserving social peace after a tumultuous past two years that saw the president of two decades, Abdelaziz Bouteflika, unseated after months of massive, peaceful protests. For similar reasons, officials will remain especially keen on projects offering local employment (even if the cost is higher) and integrating local producers, given the political salience of persistent unemployment. Recognizing the difficulty of maintaining the oil and gas revenues that are currently the lifeblood of Algeria’s monolithic economy, Algerian authorities are likely to favor bids that can show higher levels of local product and workforce integration, as well as technology transfer to help Algeria create solar power generation-related industries and manufacturing.

Sixth – nothing’s over till the fat lady sings. The announcement of the solar tender has been made, but much has yet to be determined. Be prepared to act by the announced or anticipated deadlines, but do not be surprised if the launch date continues to be pushed back.