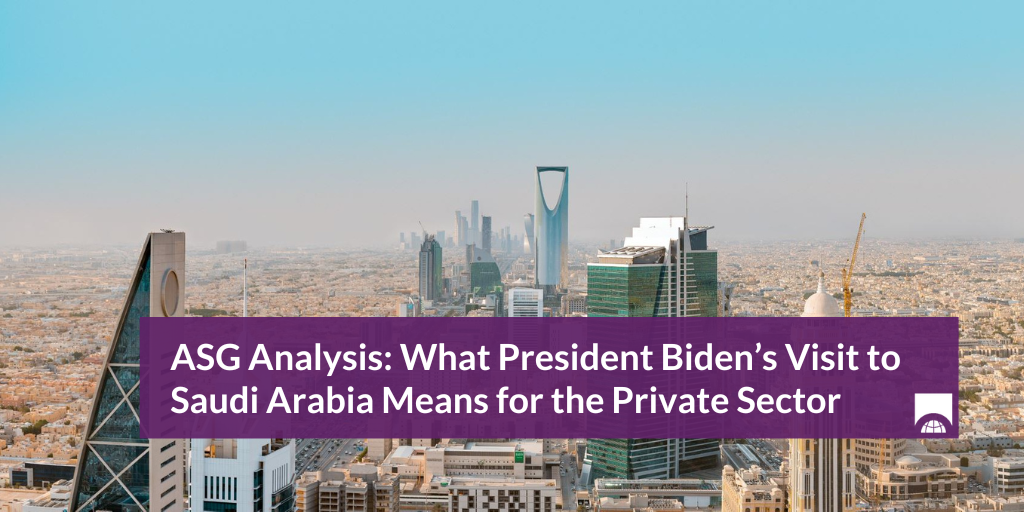 As has been widely covered in the media, President Biden traveled to Israel and Saudi Arabia last week to meet with leaders of both countries as well as with the Gulf Cooperation Council + 3 (Egypt, Jordan, and Iraq). The visit to Saudi Arabia was particularly controversial given the president’s pledge during the 2020 campaign to treat Saudi Arabia as a “pariah” and the decision after his inauguration to release a CIA assessment implicating Saudi Crown Prince MBS in the assassination of Jamal Khashoggi. Notwithstanding the insistence from the White House that it was focused “more on the meetings than the greetings,” the context of the visit made the optics of President Biden’s initial encounter with MBS especially fraught.

The “fist bump heard round the world,” therefore, was as of much of a message as any official statement. While the Western media reaction to the visit was largely critical and focused on the evolution in the president’s position on MBS, the general Saudi reaction was not surprisingly positive, and was framed as an effective American acknowledgement of Saudi Arabia’s importance and recognition of the crown prince’s role. Both U.S. and Saudi official sources indicate satisfaction, if not relief, that the visit achieved its main objective – to reset the personal relationship between the president and the crown prince – which should unlock further cooperation on energy, security, and economic issues.

There were other important elements to the visit as well, of course. The opening of Saudi airspace to all airlines, including Israeli ones, was a step towards an eventual Saudi-Israel normalization.  President Biden’s meeting with Egyptian President Abdel Fattah el-Sisi, whom the White House had heretofore kept at somewhat of an arm’s length, will help stabilize that relationship in the face of mounting economic problems in Egypt. And the president’s invitation to UAE President Mohammed bin Zayed to visit the United States should help to repair a frayed U.S.-UAE relationship and potentially pave the way for the transfer of F-35/Joint Strike Fighters to the UAE.  But the main event was clearly the Biden-MBS meeting and what it portends for the overall relationship.

Implications for companies and institutions

In the days since the president’s team left the Kingdom, the implications of the visit for the broader relationship between the two countries are becoming clearer.

Firms and institutions will still need to factor public opinion into their plans, however. This is especially true for Saudi entities seeking to enter the U.S. market, where public attitudes towards the Kingdom remain largely negative. While the April 2022 U.S. roadshow for the NEOM gigaproject generally proceed smoothly, most Western media coverage of the Saudi-funded LIV golf tournament has been critical (though so has coverage of its rival the PGA), as have reports about the Kingdom hiring lobbyists and investing in funds run by former Trump administration officials. Saudi entities seeking to enter the U.S. market therefore have a window of opportunity, but still need to proceed carefully, and think through their messaging and how they will respond to likely criticism.

This government-to-government engagement already yielded results this trip with the announcement of a new bilateral framework for cooperation on the deployment of 5G technology and the development of 6G technology. This approach, which focuses on cloud-based radio access networks where the U.S. has a competitive advantage, should help Western firms compete with Huawei and other providers. The same may apply to clean energy, cybersecurity, and air defense, in which areas the two countries also signaled greater cooperation. On defense sales in general, while Saudi Arabia is still not popular in Congress, if the two countries are able to enhance broader cooperation following the visit (especially on Yemen) it should be easier for the administration to win approval to transfer more advanced weapons systems to the Kingdom.

The same could be true on Yemen, Iran, or Russia/Ukraine, where the Biden administration already expects the Saudis to show more sensitivity to the U.S. position.  This is especially true given that 2023 will signal the start of the U.S. presidential election campaign, when President Biden (or his successor, should he decide not to run) may come under pressure for abandoning a principled position on Saudi Arabia if the Kingdom is seen to have not followed through.  While we do not expect a return to the chilliness of the 2021-2022 period, it is certainly possible that the Kingdom could become a target of renewed criticism from several quarters, and that the administration could scale back high-profile cooperation with Riyadh as a result.