ASG Analysis: What to Watch as Germany Negotiates a New Governing Coalition 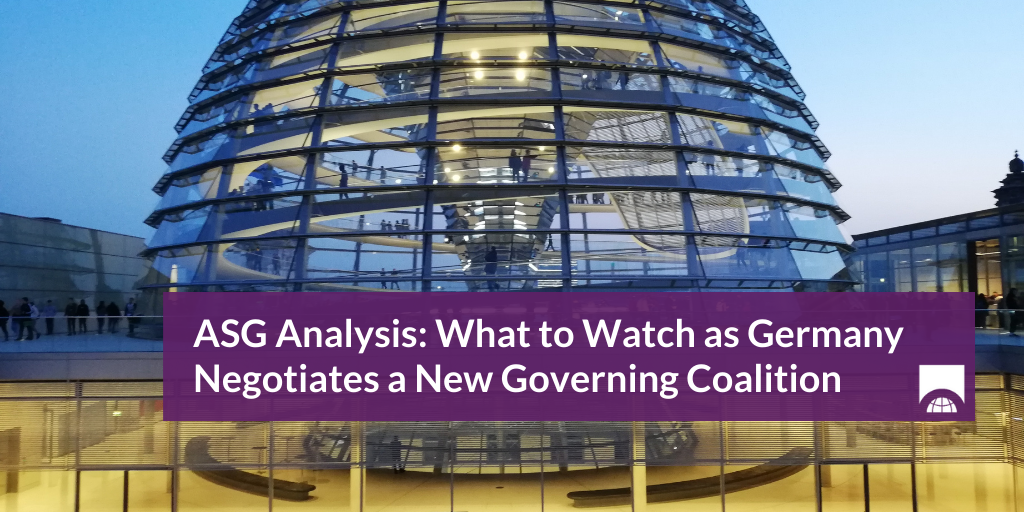 The center-left SPD and its experienced chancellor candidate Olaf Scholz came first with 28 percent of the vote. The party looks likely to form a so-called “traffic light” government with the left-leaning Greens and the center-right FDP, who received 16 percent and 12.5 percent of the vote respectively.

The results and anticipated coalition would represent continuity. The SPD is the junior partner in the current government, with Scholz as finance minister. Scholz is personally the most popular candidate for chancellor, garnering more support in polls than the SPD itself despite Germans voting for a party and not a specific candidate.

It looks increasingly likely that the governing CDU and its Bavarian sister party, the Christian Social Union (CSU), which came second, will be left out of the coalition, a disappointing result after years of strong support for Merkel. Despite this, the CDU’s candidate, Armin Laschet, still hopes to challenge the SPD for the leadership role and will meet with the FDP and the Greens to discuss the potential for a coalition.

In the 2017 election negotiation cycle, the CDU led talks with the Greens and the FDP only to have the FDP walk out over the position of Finance Minister. This makes it less likely, though not impossible, that this coalition will prevail now. Complimentary statements exchanged between leaders of the Greens and SPD immediately after the election results seem to be an invitation for Scholz to begin working on a center-left coalition.

The incoming government will be the largest the Bundestag has sat and is younger and more female. Over a third of the elected MPs are new to government, signaling a shift away from the old guard. This sets the tone for the new government to be more ambitious in both its domestic and European policy, as global challenges will require new ideas and a desire to test the stability of the Merkel era.

Officially, a new government should be convened in 30 days, but coalition-building takes time. In 2017, the formation of a Grand Coalition of centrist parties took six months, and that happened only after efforts toward a center-right government failed. Until the parties agree upon a coalition, Chancellor Merkel will lead a caretaker government and will likely carry out official state duties for the rest of the year, including at the G20 summit in October.

No formal mandate is given to a party, unlike in the United Kingdom or other parliamentary systems.  Instead, the negotiations are informal jockeying. Both the CDU/CSU and the SPD have claimed the right to form a government and will see what the market will bear.

We expect junior parties to try to call the shots. Both the Greens and FDP have said that they will negotiate with one another, then see what the SPD and CDU/CSU can offer. While the FDP and Greens remain far apart on fiscal issues, such as taxes and public borrowing, common ground could be found on civil rights and national security, a reform-centric approach to education and digitalization, and the scope of Germany’s green transition.

This is a smart effort to avoid a three-way negotiation in which the larger partner would hold the upper hand. Each junior party will, however, be tempted to sound out what might be available to it from others, especially the FDP, which is naturally aligned with the CDU/CSU. Signs that the junior parties have a deal among themselves, or that negotiations have broken down, will serve as a key indicator of the coalition’s outlook.

At the same time, the senior parties will try to set the price. Neither party will wait, especially the CDU/CSU, which must outbid the SPD. Most discussions will be private, but a party may float an offer in public if it fears it is outmaneuvered. These might be spoiler offers. For example, there may be a suggestion that the FDP could get the Finance Ministry in a CDU government, along with the right to implement its Euro-skeptic policies. Such an offer might make it hard for the FDP to accept less from the SPD.

There will be intra-party politics as well. The CDU’s Armin Laschet has been facing more and more criticism after a disappointing result at the polls. Key Bavarian allies in the CDU’s sister party, the CSU, have already broken rank and conceded that Scholz has the best chance of becoming Germany’s next chancellor. Laschet apologized to his party for mistakes made during the campaign but seems likely to hold his leadership role while there is a chance that the SDP will fail to form a government.

Key issues that will shape the negotiations

Positions. As always, government posts will matter. The Greens, having finished ahead of the FDP, will expect a Vice Chancellor post and a prestige ministry of their choice, most likely the foreign ministry. There is also discussion of combining energy policy – currently under the economic ministry – with the environmental ministry to create a strengthened body to address climate change. The FDP has campaigned as virtually a single-issue party on macroeconomics and will seek the finance ministry. In 2017, the party ended coalition talks when it lost discussions on fiscal policy.

Climate action. The Greens and FDP are starkly divided on climate. The Greens insist on a quicker and more radical transition toward renewable energies and are suspicious of market-based approaches such as emissions credits. The CDU and FDP have found common ground on pricing carbon emissions and emphasizing market mechanisms to curb companies' carbon footprint. There is room for both approaches, and this issue is existential for the Greens.

Digitalization. The pandemic made clear that Germany is far behind in the digitalization of both its public and private sector, as well as in other fields such as education. This is an issue on which the Greens and FDP agree and could help pave the way for further compromise.

Fiscal policy. The Greens and FDP remain far apart on taxes and public borrowing, which will have to be addressed before any collective bargaining with the CDU or SPD begins. The FDP has campaigned on a return to strict European debt limits, a position that would reverse the monetary and fiscal policies responsible for cushioning the pandemic. Scholz recently criticized FDP leader Christian Lindner’s views on cutting taxes as “morally difficult to justify,” and the SPD leader’s support adds leverage to Green efforts aimed at allowing unlimited financing for green energy. The Greens would like to increase taxes on the wealthy in order to pay for an ambitious social and sustainable agenda. Still, stock markets opened slightly higher the day after the election as a reaction to the likelihood of the FDP holding significant influence within a coalition, and this signal will affect the new government’s policies.

Russia. The SPD, FDP, and Greens have different approaches, with the Greens much more critical of Russia, and both the SPD and FDP – for commercial reasons – less inclined to confront Russia. The recently completed, and controversial, Nord Stream 2 pipeline will be especially important in shaping government policy. Still, Russia should not be a major sticking point.  Scholz has openly called for increased EU influence across Eastern Europe and has declared Russian actions in Ukraine a “huge problem.”

European affairs. Voters remain strongly pro-EU, with the CDU, SPD, and Greens all in favor of bolstering the EU and Germany’s role within it. This is the second election after the 2015 migration crisis in which German voters have returned the mainstream parties to power, even though neighboring countries have seen leaders focused on anti-EU, anti-immigrant, and nationalist themes. Successful integration of the 2015 migrants is part of the reason, but the attachment to the EU runs especially deep. Right-wing governments in Poland and Hungary, in particular, may come under increased scrutiny for rule of law problems. It will also be important to watch how the new government works with France, which will hold the EU Presidency beginning February 1 and faces its own elections in spring 2022.

Trans-Atlantic relations and trade. When asked about U.S.-Germany relations, a 2020 poll pointed to a disparity between the two sides: 75 percent of Americans think the relationship is good, but only 34 percent of Germans would agree. However, President Joe Biden’s win strengthened the relationship, and all major German parties support a continued alliance with the U.S., particularly on trade. The only party to not support close U.S.-German ties is the Left, which did not garner enough electoral support to make a difference. However, the Biden administration’s push to unite Europe against China could prove a sticking point in the relationship.

Beyond the immediate results, are there trends for the longer term evident in the results?

Fragmentation … The two major groupings – CDU/CSU and SPD – together earned historically low shares of the total vote. This may reflect fatigue with the relentless centrism of the Grand Coalition governments (two of the last three). If the major parties absorb the agenda of the FDP and Greens, especially on environmental issues, predictions of their demise may prove premature. That being said, the CDU especially needs to address the generational gap in Germany and look to widen its appeal among different voter groups.

… to a Point. The far-right AfD party lost ground, winning only 10.3 percent of the vote and losing their position as the main opposition party in the Bundestag. The party remained relevant in its long-time Eastern strongholds but has not shown an ability to broaden its appeal or link up with one of the major parties. In part, this is due to a split between its traditional conservatives and far-right activists, and to an Americanized campaign of anti-masking and anti-media slogans backed by social media disinformation. Is there a lesson? It is not yet clear that the kind of rightist consolidation evident in Hungary, Poland, and even the U.K. is ripe in Germany. The AfD is a regional party, and policies that appeal to its extremes may turn away traditional conservatives from across Germany.