ASG Analysis: What's an AUKUS? The Dispute Among France, Australia, the U.K. and the U.S. 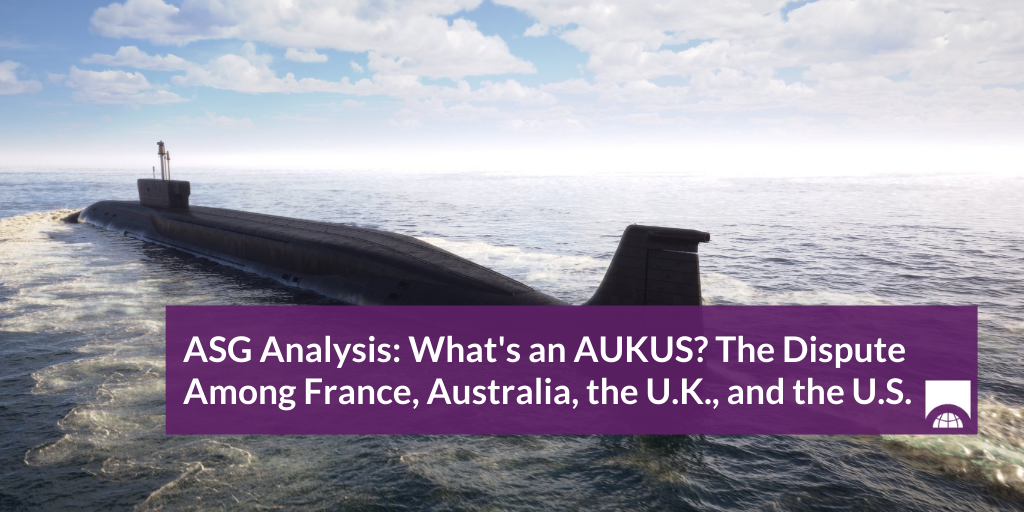 How did this happen?

Reportedly, AUKUS was developed by very small groups of officials in London, Washington, and Canberra. Officials on all sides have broadly emphasized the limited number of people working on the arrangement, and we can expect reports from anonymous sources over the next few days explaining that the mandate for secrecy came from leaders. It is likely that poor communication between Washington and Canberra about who would tell Paris contributed to the surprise. The French outrage is not surprising. Problems with the deal were widely reported in the Australian press, and Prime Minister Scott Morrison appointed a commission to study alternatives in February. However, U.S. and Australian policymakers gave French officials no warning that an alternative deal was imminent until the last minute. The timing of the deal, prior to major U.S.- European engagement at the UN General Assembly this week and the September 29 EU-U.S. Trade and Technology Council, further adds to the impact of the announcement on relations across the Atlantic. The negotiators’ apparent decision not to consult with other officials may mean that problems in the defense contract could emerge as the deal receives more scrutiny, especially with regard to timelines for sub delivery, the nuclear supply chain, and cost. The road for contractors seeking to benefit from AUKUS may not be smooth. AUKUS does assert U.S. primacy in setting Western policy in the Pacific, as opposed to the French effort to maintain a separate (but coordinated) line. As multiple commentators have noted, U.S. officials have expressed concern over European policy toward China. It is striking, however, that U.S. officials are not portraying the announcement as a reaction to French policy in the region.

France will look to demonstrate its displeasure, and the United States will seek to smooth matters. The damage will be repaired, but it will take time. French officials have not provided reassurances that the fallout will be contained, but they have also not yet escalated the dispute into major multilateral venues and are unlikely to. French ambassadors to Canberra and Washington have been recalled. They will return to post when needed or once things have cooled. As if to correct an oversight, authorities in Paris added that the decision not to recall the French ambassador in London reflected a conclusion that the United Kingdom was not important enough to ignore. This is a high-quality French insult of the English, on a level not seen since Monty Python and the Holy Grail 50 years ago. European Commission President Ursula von der Leyen has said that the treatment of France was “unacceptable,” and other European officials have spoken of the need for solidarity. Rumblings about postponing the upcoming EU-U.S. Trade and Technology Council have also surfaced, although that is still unlikely to receive enough support in Brussels. Australia will be the subject of some anger. France has called for postponement of the next round of negotiations of an EU-Australia free trade agreement, which were already on hiatus until after a new government is in place in Germany and after the French elections next year.

The first opportunities to gauge reaction at a policy level will come this week, when foreign ministers are scheduled to meet several times during the opening of the United Nations General Assembly. We expect no chummy press conferences or U.S.-French statements that relations have been repaired or reset. Rather, discussion will focus on key issues such as climate, Afghanistan, migration, and Covid-19 recovery, where anger can be ignored. President Joe Biden has requested a conversation with President Emmanuel Macron, who had not been planning to attend High Level Week in New York. Macron is beginning to prepare for elections in April 2022 and will look to position himself as able to criticize the U.S. and, importantly, to walk away from U.S. initiatives as Charles de Gaulle did in the 1960s. Emphasis on strategic autonomy and criticism of NATO (a theme of Macron’s for years) will intensify. U.K. Prime Minister Boris Johnson will visit Washington this week. Most attention will be on the preparation for the UN climate conference (COP26) in early November, but this will provide an opportunity for President Biden and the prime minister to frame how they would like France to respond.

Will business be hurt?

No, except for firms directly involved in the contract. We anticipate that French politicians will avoid public appearances or statements with U.S. companies on commercial initiatives until the government’s overall line is clarified. Work at staff levels and in practice are likely to continue. In short, this dispute is much more like Freedom Fries in 2003 or even various disputes over NATO in the 1960s than a fundamental rift in relations. This is not 1931, when U.S. and French differences over German debt precipitated a political and economic crisis; the commercial interests here are substantial but not existential.

How will the breach be mended?

First, someone from Canberra and/or Washington may need to apologize, at least for the lastminute notice; a public statement costs both sides very little but opens the possibility to begin mending relations. Second, France may attempt to punish the U.K., U.S., or Australia across diplomatic venues. Post-Brexit negotiations will become even more difficult, and candidates for UN or other multilateral positions will receive more limited support. These short-term tit-for-tat responses are likely to signal French displeasure with the move, but also the intention to move past retaliation and distrust in the long run. Third, the U.S. and France may find ways to cooperate on Asian defense matters. There has been speculation that the U.S. intends for France to join an expanded Quadrilateral Security Dialogue (Quad). It will be difficult for France to accept this offer if it is made in response to the disagreement, as it will seem to be accepting a junior role. After a few months, however, this is a likely outcome especially if French companies are brought into the commercial arrangements.

Fourth, French companies could be welcomed into commercial arrangements associated with AUKUS defense cooperation. This will be difficult but should not be impossible.

What about China’s reaction?

The announcement of the AUKUS trilateral security alliance and submarine deal likely further diminishes the possibility of any substantive bilateral cooperation between the U.S. and China in the near future. In response to the AUKUS announcement, China’s Ministry of Foreign Affairs called on the U.S. to “abandon the obsolete cold war zero-sum mentality” or risk “hurting their own interests.” These comments reflect the Chinese government’s often-repeated view that the U.S. side bears sole responsibility for the deterioration in relations. We expect the Chinese side will adhere to this negotiating posture with the U.S. and add AUKUS to the list of behaviors the U.S. must rectify before substantive cooperation can occur.

In the short term, it is unlikely the Chinese government will take drastic countermeasures against U.S. companies in China, but there are indicators that suggest Beijing could enact additional trade and economic sanctions against Australian interests.

Over the longer term, China will continue to strengthen its military presence in the Indo-Pacific and also try, rhetorically at least, to expand its economic and trade ties with countries in the region. China’s announcement that it had applied to join the Comprehensive and Progressive Agreement for Trans-Pacific Partnership (CPTPP) on Thursday – immediately after the unveiling of AUKUS – was probably not coincidental. It is unlikely that China will participate in CPTPP any time soon – in part because Australia, Canada, and others may not want to engage in negotiations with China while Beijing bullies these countries over other issues, and in part because Beijing is unwilling to meet CPTPP’s high standards. Instead, Beijing’s announcement was aimed at demonstrating its interest in regional economic cooperation at a time when the U.S. has yet to show any enthusiasm for re-joining CPTPP. Most countries in the region want to see both enhanced security and economic cooperation from the U.S., but trade promotion will be politically challenging for the Biden administration prior to the 2022 midterm elections.