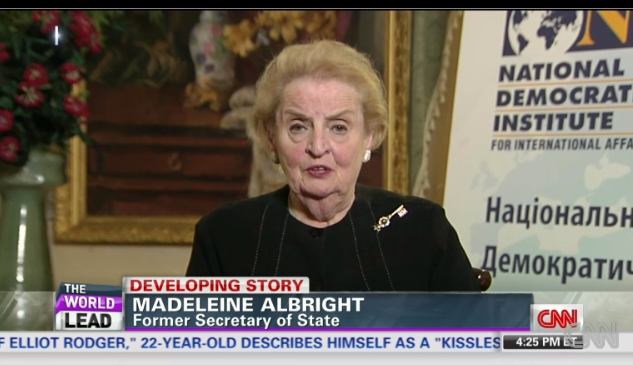 Watch the video at CNN

CNN) – Former Secretary of State Madeleine Albright said Monday that the results of the Ukraine's elections, despite disenfranchisement of some voters in eastern Ukraine, show that the people of Ukraine, “don’t want to be destabilized, they want to be a normal European country.”

Albright said that only a “small percentage” of the Ukraine’s 45 million people felt the effects of the election disruption. Otherwise, she said the election was “free and fair.”

Still, Albright blamed the Russian government for some disruptions that did occur, but downplayed their impact on the election process and results.

“I think that the Russians clearly had a role in kind of provoking some of the separatists, but whatever they tried to do, they did not succeed in the majority part of Ukraine,” Albright said in an interview with CNN's "The Lead with Jake Tapper" Monday.

Albright emphasized the elections as decisive expression of the Ukrainian people’s will, saying, “There was orderly voting, the people knew what they wanted, they wanted a sovereign, democratic country.”

The former Secretary of State urged the U.S. and the international community to “actively” help Ukraine build up and sustain any democratic gains it made.