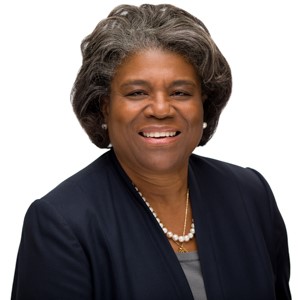 Ambassador Thomas-Greenfield joined ASG in 2017 following a distinguished 35-year foreign service career. From 2013 to 2017, she served as U.S. Assistant Secretary of State for African Affairs, where she led the development and management of U.S. policy toward sub-Saharan Africa. Prior to that appointment, she served as Director General of the Foreign Service and Director of Human Resources, leading the team in charge of the State Department’s 70,000 personnel.

Her foreign service career also included an ambassadorship to Liberia from 2008 to 2012, and postings at the U.S. Mission to the United Nations in Switzerland, as well as in Kenya, Nigeria, The Gambia, Pakistan, and Jamaica. In Washington, she served as Principal Deputy Assistant Secretary of the State Department’s Bureau of African Affairs from 2006 to 2008 and as Deputy Assistant Secretary in the Bureau of Population, Refugees and Migration from 2004 to 2006.

Donald Gips, who led ASG’s Africa practice since 2013 and oversaw its significant expansion, has taken a new position as Chief Executive Officer of the Skoll Foundation.

“Linda’s deep experience and unmatched relationships across the African continent, as well as her superb ability to understand and navigate complex geopolitical issues, are invaluable assets to our clients. We look forward to her leadership of ASG’s dynamic and growing Africa practice,” said ASG Co-Chairs Secretary Madeleine K. Albright and Secretary Carlos M. Gutierrez in a joint statement. “We will miss having Don as a member of the ASG team and wish him the very best in his new position.”