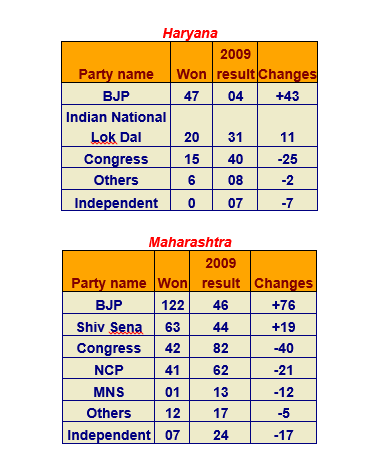 The recently concluded state elections in Haryana and Maharashtra were the first major elections since the Bhartiya Janta Party (BJP)-led National Democratic Alliance (NDA) won an absolute majority in the Lok Sabha, the lower house of parliament, in  May. Much like the national elections, which unseated the incumbent Indian National Congress (INC) after a decade in power, in the recent elections the BJP defeated Congress coalitions that had held control of state legislatures for ten years in Haryana and fifteen in Maharashtra.

While the BJP won an absolute majority in Haryana, winning 47 out of 90 seats, it fell just short of the majority mark in Maharashtra, winning 122 out of 288 assembly seats. The results can be attributed to dissatisfaction with the former Congress-led state governments, which faced several high-profile corruption scandals while in power. A day ahead of Maharashtra’s election, former chief minister Prithviraj Chavan admitted his government’s missteps in a newspaper interview. His comments, which were widely publicized, provided a last minute boost to the BJP. Prime Minister Modi’s popular appeal was also evident; Modi campaigned extensively, in contrast to the Congress leadership, which was largely absent.

Another new development was the BJP’s confidence in its ability to win seats on its own. The party contested separately from its coalition partner of 25 years, the Shiv Sena, and won nearly twice as many seats as its former ally.

The BJP has appointed Manohar Lal Khattar as Haryana’s new Chief Minister. This is Khattar’s first time as member of the legislative assembly. Though he does not belong to the state’s majority Jat community, he was allegedly chosen for his good working relationship with Prime Minister Modi.
After several back channel discussions with state parties in Maharashtra, the BJP decided to form a minority government with Devendra Fadnavis as Chief Minister. The BJP will have to prove that it has assembled a majority on the floor of the House by November 15. The Nationalist Congress Party (NCP), which won 41 seats, has pledged its support. However, the BJP may try to strike a deal with its former ally, Shiv Sena, instead.

There are several takeaways from the most recent round of Assembly elections. First, the BJP’s victory has reinforced the perception that the party’s promise of good governance resonates with voters across the country. Second, the party is likely to continue fighting elections on its own rather than forming a coalition; the BJP has not entered into pre-poll alliances with parties for state elections in Jharkhand and Jammu and Kashmir, which will take place in December.

The elections also showcased the BJP’s growing presence in Haryana. In 2009, the party won only four seats in the state, a strong contrast to this year’s outright majority. Its recent success may embolden the party to make further inroads in states where it does not have a significant presence, like West Bengal and Tamil Nadu, and to take a more confrontational approach with these state governments.
Finally, after winning Haryana and Maharashtra, the BJP can now elect 10 more MPs to the Rajya Sabha, or upper house, of the Parliament over the next 5 years. Even though the BJP has an absolute majority in the lower house, it has only 43 members in the upper house, which poses a major stumbling block to its legislative agenda. This was most evident during the monsoon session of Parliament when the Insurance Laws (Amendment) Bill, 2008 could not be passed in the upper house and was instead referred to a Select Committee, further delaying reforms in the insurance sector.

Going forward, the BJP will be keen to shore up its numbers in the Upper House by winning successive rounds of Assembly elections, starting with the elections in Jharkhand and Jammu and Kashmir in December.