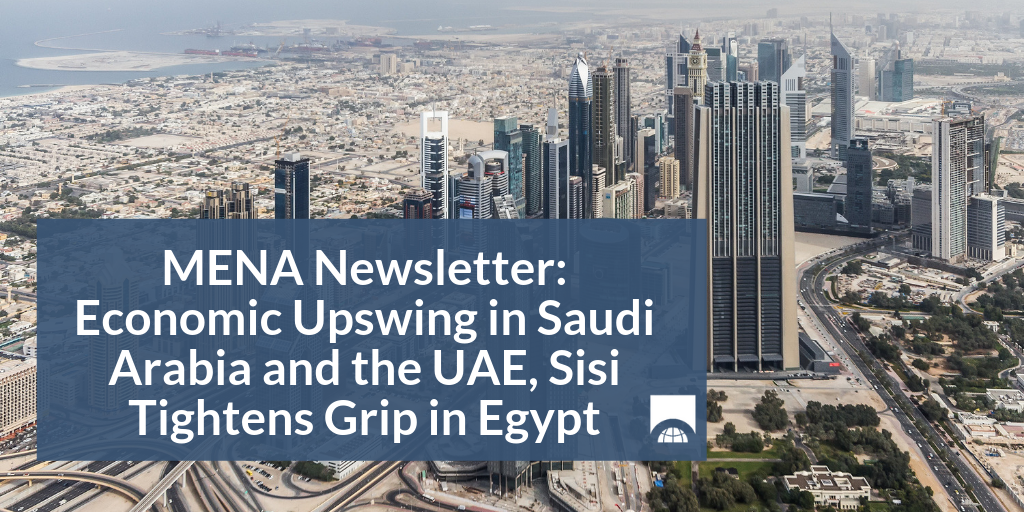 The Saudi economy has struggled to recover from the global oil market crash of 2015. After contracting in 2017, the economy returned to modest growth in the second half of last year, driven mainly by a rebound in oil prices in the spring and summer. However, this turnaround largely did not extend to the non-oil sector.

There are signs of a fuller recovery this year. The IMF released new forecasts on May 15 predicting that Saudi non-oil GDP will grow by 2.9 percent in 2019, the fastest since 2015, although still well short of the 2000-2015 average of 6.2 percent. (It is also less than the IMF’s 3.3 percent global growth projection.) The newfound strength of the non-oil sector is expected to drive stable 1.9 percent growth for the overall Saudi economy, despite weakness in the oil sector where prices are expected to stay in the mid-$60 per barrel range for the year. The shift from oil-driven economic growth last year to non-oil-driven growth this year is an encouraging development for Vision 2030 efforts to diversify the Saudi economy away from oil.

Positive forecasts for the non-oil sector are consistent with early data for lending, consumer spending, and foreign investment. In Q1, Saudi Arabia’s score on the Emirates NBD Purchasing Managers’ Index (PMI), which measures business activity in the non-oil private sector, saw its fastest expansion since late 2017. Meanwhile, bank lending to private businesses grew at the fastest rate since 2016. Private credit had been especially slow to recover from the oil market crash, declining for 13 straight months before bottoming out in April 2018. Consumer spending also ticked upward in Q1, a sign of greater consumer confidence likely driven in part by an increase in government cash handouts in December.

Finally, Q1 saw the issuance of a record 267 new foreign investment licenses, a 70 percent increase over Q1 2018. This provides further evidence of a rebound in foreign direct investment (FDI) into the Kingdom as the overall Saudi economy improves.

After several years of slow growth, the UAE economy also appears to be turning a corner. According to late-April forecasts from the IMF and the World Bank, the combination of massive infrastructure stimulus ahead of Dubai Expo 2020 and oil price stabilization will spur 2.6 percent GDP growth in 2019, on track for 3.0 percent growth by 2020. This would represent an improvement from 1.7 percent growth in 2018 and just 0.8 percent growth in 2017.

Early signs of an economic turnaround include revived private sector confidence and a surge in business volume and new orders. The UAE’s score on the Emirates NBD PMI rose for the second month in a row in April, reaching a 16-month high. 37 percent of the firms surveyed reported higher business activity last month, and roughly 80 percent predicted business activity to be higher a year from now. None of the firms predicted a decline in business.

While the overall economic outlook appears positive, there are weak spots. Private sector employment remains stagnant. The UAE real estate market is also soft. In Q1, property prices in leading investment zones in Abu Dhabi fell by more than nine percent, a trend that is expected to continue throughout the year. The real estate slump has been even more acute in Dubai, where property prices fell 12.4 percent in Q1 and are down more than 27 percent from 2014.

On April 17, Egyptian parliament voted 531-22 to approve constitutional amendments extending President Sisi’s term and expanding his powers. The amendments were submitted to a public referendum held April 19-22. On April 23, the Egyptian National Elections Commission (NEC) announced that they had passed with nearly 89 percent of the vote. According to the NEC, some 27 million Egyptians participated in the referendum, a turnout of roughly 44 percent, with more than 23 million voting in favor of the amendments and just three million voting against.

Members of the Egyptian opposition have criticized the rushed timing of the referendum, arguing that it took place too soon after the parliamentary vote to allow for public debate. There have also been claims of interference with election observers. Some journalists and diplomats who were granted permission to observe the vote have reported being arbitrarily refused entry to polling places. Additionally, critics have alleged the existence of a bribery scheme: upon entering polling places, voters received vouchers that they could exchange once they voted for Ramadan boxes filled with staple food items.

The passage of the amendments clears the way for President Sisi to rule until 2030 by extending the length of his current term from four to six years and allowing him to run for a third term in 2024. It also further erodes judicial independence. President Sisi will now have the power to appoint the heads of all judicial bodies and select the Chief Justice of the Supreme Constitutional Court and the public prosecutor. Finally, the amendments diminish the influence of the House of Representatives by reducing the number of MPs from 596 to 450 and reintroducing an upper parliamentary chamber, the Council of Ministers, one third of which President Sisi will appoint.

Although it is too early to know for certain what effect the new amendments will have on the Egyptian economy, the strengthening of Sisi’s grip on power and the erosion of the rule of law may exacerbate existing concerns on the part of foreign investors. Under Sisi’s rule, the sprawling network of enterprises owned by the Egyptian military has expanded its economic dominance. This has fueled the perception among foreign companies that they are competing on an uneven playing field; in the second half of last year alone, FDI into Egypt fell by more than 24 percent.

On April 30, the Saudi cabinet approved new regulations for the Saudi Center for Commercial Arbitration (SCCA), which began accepting disputes in October 2016. The SCCA was established to serve as a regional hub for commercial arbitration and help attract foreign investors to the Kingdom, and the new regulations clarify the Center’s governance and give it greater independence. The regulations stipulate, for example, that the Chairman of the SCCA Board will no longer be appointed by the Head of the Council of Saudi Chambers but by the King in his capacity as President of the Council of Ministers.

These changes are unlikely to make the SCCA a go-to jurisdiction for regional arbitration, given strong competition from well-established regional arbitration centers such as the Dubai International Financial Center (DIFC) and lingering investor wariness of the Saudi legal system in general. However, efforts to improve the SCCA could reassure foreign investors concerned about settling business disputes in the Kingdom and may help Saudi Arabia raise its score on the “enforcing contracts” sub-component of the World Bank Doing Business index, a goal of Vision 2030.