Secretary Albright on Resilience in the Face of Disaster

Read the piece via the New York Times. 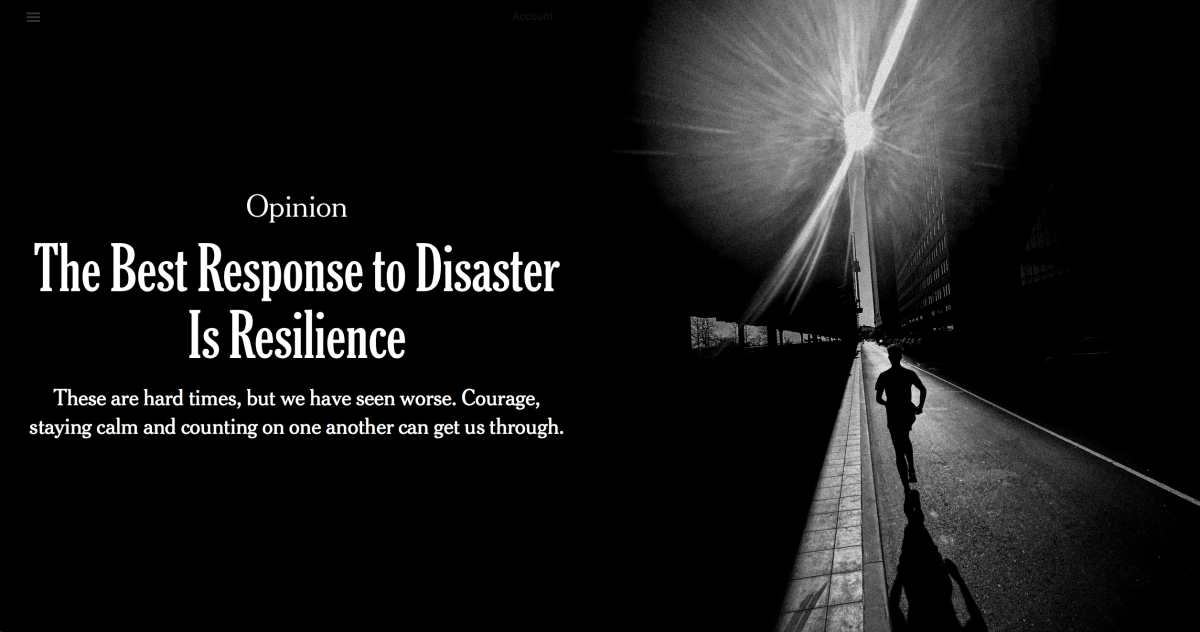 Dr. Albright, who was born in prewar Czechoslovakia, was the first woman to serve as United States secretary of state.

My first memories are of an apartment in London on Kensington Park Road, with a tiny kitchen and two small rooms in the wartime 1940s. The building served as a temporary home for refugees from all corners of Nazi-occupied Europe. The British capital was under siege.

Our daily experience was shaped by food rations, curfews, blackout curtains, and shortages of almost everything. During air raids, residents gathered in close quarters in the low-ceilinged cellar, singing songs, sharing biscuits and tea.

One afternoon, my father ignored the wailing siren and insisted on staying upstairs to complete work on a radio script. Flying bombs shook our building so much that he hid under a table before rushing down the stairs to join us. On another occasion, a young woman from a neighboring apartment tempted fate by sneaking out to a pub for darts and drinks. The pub took a direct hit that night and she was nearly crushed. She lived, I learned later, until the age of 103.

Humans are a resilient species. Because of the calm and courage of my parents, I saw nothing abnormal about trying on a gas mask (with Mickey Mouse ears) or learning to jump rope beneath a potentially lethal sky. What would have been strange was real butter and fresh fruit.

My life in the decades since, both in and out of government, has been enriched by the survivors of other extraordinary times. During my time as secretary of state, I met a 6-year-old boy in Uganda whose mother had been killed in a massacre. He had pulled himself out from under her body and walked several miles, carrying his little sister on his back, to a camp run by a religious organization. In Sierra Leone, I held a 3-year-old girl who had lost her arm to a bullet; she was later adopted and lived on the same street I do in Washington.

In Bosnia, I grasped hands with women whose husbands and sons had been murdered and dumped in a mass grave near the village of Srebrenica. In Thailand, I met teenage girls who had been rescued from sex traffickers; they braided one another’s hair while telling me of their determination to live fearlessly despite scarred minds. At Georgetown University, back in Washington, I taught alongside a professor, Jan Karski, who had escaped from wartime Poland carrying to Britain and America some of the earliest eyewitness accounts of the transport of Jews to killing centers ordered by Hitler.

During my tenure in the State Department, I worked closely with Vaclav Havel, leader of my native Czech Republic, and with South Africa’s Nelson Mandela; both had spent years as political prisoners. I also visited American soldiers, aviators, diplomats, aid workers and Peace Corps volunteers deployed to regions where each day brought intense suffering and renewed conflict.

As president, Bill Clinton talked often about “the quiet miracle of a normal life.” But what we customarily think is “normal” is neither as common as supposed, nor as inevitable. A generally contented society is a rarity that humans must do our best to establish and sustain.

Flawed as we are, we have built great civilizations, learned to coexist and — with catastrophic exceptions — live in peace. However, such accomplishments do not happen without obstacles. To be human is to be tested over and over, and we usually need abundant help from others.

Of course, what we consider normal varies widely. A homeless man’s routine differs from that of a billionaire; a refugee may be less eager to resume “business as usual” than a successful lawyer; 5-year-olds don’t look at the world with the same eyes as someone approaching her 83rd birthday.

Whether we are driven by nostalgia or an itch for something new, whether we are revolutionaries or preservationists, it is in the abnormal times that we learn most about ourselves and others. The shock absorbers that ordinarily shield our emotions and lull our minds no longer work so well. Our schedules are disrupted and our priorities change. We shrink, we grow, we may even die; we do not remain the same. This is true of nations as well as people.

I do not claim to understand much about human psychology. But I do think that we are a lot tougher and more capable of moral courage than cynics suggest, and that we benefit from the survivors among us. According to ancient myth, the one divine gift vouchsafed to humans — after all its evil companions escaped from Pandora’s box — was Hope.

When asked my outlook on life and world affairs, I reply that I am an optimist … who worries a lot. These are not the best of times, but we have seen worse. It might do well for us to view these abnormal days as an opportunity to ask more of ourselves, to reflect on our relations with one another, and think critically about improving the social, economic and political structures that shape our lives.

We can draw inspiration from those who have surmounted high obstacles in the past, and vow to make the new normal that we aim to bring about better, more just and more secure than the old.