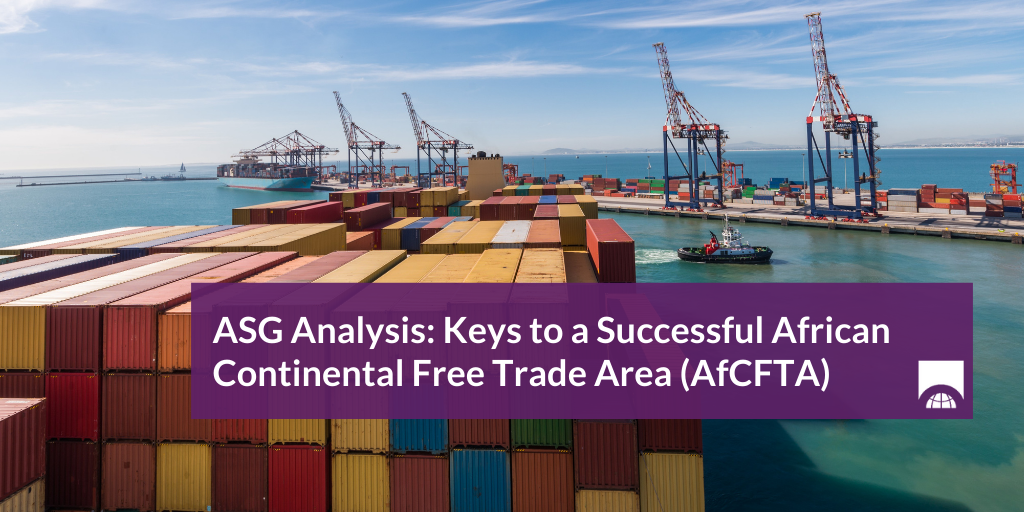 This ASG Analysis is the second in a three-part series on the African Continental Free Trade Area (AfCFTA). The first piece focused on the agreement’s status, purpose, and early implications for investors. Here, we explore ways in which the success of AfCFTA may be complicated or challenged. The third piece focuses on the agreement's future and potential. The series is part of a broader lineup of ASG Analyses examining “game-changing” developments that will shape Africa’s political and economic future.

To advance regional integration, African countries must determine the role that existing Regional Economic Communities (RECs) will play under the AfCFTA. The agreement currently allows signatory countries to remain in their RECs, permitting REC member countries to maintain their existing trading relationships while AfCFTA negotiations are ongoing.

While this approach makes sense in the early stages of the agreement’s implementation, it is likely to cause confusion if continued for too long. Many African countries belong to more than one REC and already contend with a fragile trade policy balance. Further murkiness over AfCFTA legislation and its REC overlaps could lead to different trading rules applying to the same goods. Analysts have noted that AfCFTA signatory countries could arrange to dissolve the RECs over time so that all countries trade under the single agreement.

An example of a proposed solution in the industrial sector would see African countries create regional Special Economic Zones (SEZs) to encompass cross-border jurisdictions and begin to harmonize regulations. However, innovative ideas such as these regional SEZs will require time to implement. In the short to medium term, aligning different regional trade frameworks would contribute to a solid foundation for trade and reduce regulatory headaches for international investors.

As ASG wrote previously, Africa watchers have touted the AfCFTA as an unprecedented avenue of cooperation between the continent and many of its international partners, like the United States. Nevertheless, fully defining the contours of trading relationships with countries outside of Africa needs to be a priority if the AfCFTA is to reach its full potential.

Currently, 49 African countries trade with the U.S under the African Growth and Opportunity Act (AGOA). In 2019, trade between the U.S. and African countries under AGOA was valued at over $36.7 billion. AGOA is slated to expire in 2025; if that occurs before AfCFTA signatory states reach bilateral trade agreements with the U.S., then trading under World Trade Organizations terms would resume, which would be a significant blow for both blocs.

The Trump administration pursued individual trade agreements with African countries instead of seeking to renew AGOA. The uncertainty around AGOA was likely a motivating factor behind pursuit of the U.S.-Kenya Free Trade Agreement (FTA), the first of its kind between the U.S. and a sub-Saharan nation.

However, that potential agreement is facing major headwinds: The Biden administration is reviewing the deal, and the Trade Promotion Authority (which allowed the U.S. Trade Representative to negotiate agreements under expedited congressional procedures) expires on July 1. Talks are ongoing, and there is strong political will on the Kenyan side to come to an agreement. But the Biden administration may struggle to reconcile its public support for the AfCFTA with any deal with Kenya. Should the bilateral agreement succeed, analysts argue that similar third-party FTAs are likely to emerge and seriously undermine the foundation of the continental arrangement.

For this reason, the U.S.-Kenya FTA saga is a test of international partners’ commitment to the AfCFTA. The ideal solution requires reconciling the conflict between bilateral FTAs and the AfCFTA; the sooner the relevant stakeholders can bring clarity over the dynamic between these seemingly contradictory engagements, the faster international partners can invest and trade effectively with a single African market.

Understanding foundational threats to the AfCFTA

Beyond the issue of untangling bilateral, regional, and continental trade issues to allow the AfCFTA to succeed, other realities challenge the agreement’s success.

Many African countries lag the rest of the world in delivering water, electricity, roads, rail transportation, and other critical infrastructure. Closing this infrastructure gap will boost economic development, increase entrepreneurship, and improve quality of life. However, it will not be easy. The African Development Bank (AfDB) estimates that infrastructure deficits in Africa account for 30 to 60 percent of productivity losses, most of which are due to shortfalls in the energy sector. The continent needs to spend between $130 and $170 billion every year to close the current infrastructure gap, but investment currently falls short by $68 to $108 billion. Currently, only 10 percent of Africa’s $2.5 trillion worth of infrastructure projects are expected to reach financial close. This financing pipeline is unmet due to lackluster technical capabilities and uneven allocation of funds throughout the project’s funding cycle. The gap represents a threat to AfCFTA aspirations, and the promotion of efficient investment in trade-related infrastructure is an essential priority.

Attracting investment is made more difficult by increased insecurity in the region. Economic sophistication is usually a good indicator of safe investment environments, but African countries at different stages of economic development face similar security struggles. In Nigeria, for example, threats from Islamic extremist groups have existed for almost two decades. Likewise, Mozambique is dealing with rising attacks from militants in the Cabo Delgado region, home to some of the largest natural gas deposits on the continent.

African governments need to demonstrate commitment to tackling the root causes of insecurity before undertaking the monumental infrastructure investment that is necessary for trading. This means addressing the needs of indigent communities and ensuring that grassroots actors benefit from the resources and investments in their communities. This is a work in progress, and its success will depend on each government’s political will to address the critical issues it is facing.

Another major hurdle to the AfCFTA is the continent’s lack of digital infrastructure and technical capacity. African countries lag the rest of the world in a number of digital metrics, including internet penetration. Moreover, there is more income disparity among AfCFTA signatory states than is typical among members of other large trade agreements – more than double the disparity within the Association of Southeast Asian Nations (ASEAN) or the Caribbean Community (CARICOM), for instance. This means that African countries have different levels of technical capacity and digital infrastructure. In a telling anecdote, AfCFTA leadership noted that virtual trade negotiations were disrupted because many of the countries involved have poor internet connectivity.

African countries also need to develop technical capacity to deal with issues like intellectual property and trade harmonization laws. AfCFTA watchers have discussed the likelihood that the agreement will put together Special and Different Treatment provisions for least developed countries and provide them with technical assistance programs to help them compete on the same level as the larger economies.

While political leadership on the continent has shown the will to advance the agreement, many in the grassroots lean more towards protectionism. Many African countries depend on the informal sector, which accounts for more than 80 percent of employment in urban cities. Many African citizens do not know of the AfCFTA, and those that do don’t always support economic integration because of feared damage to local industries. African governments, especially in leading economies with sprawling urban centers like Nigeria and South Africa, need to emphasize the need for cooperation, work to build intra-country relationships, and inform local industry groups of the advantages that the AfCFTA will have for businesses.

Some of the challenges facing the AfCFTA are deep-rooted and will take a long time to address. At the same time, investors must note early actions taken by African stakeholders – beyond the groundbreaking, phased negotiation process, as explored in our previous analysis – to establish a foundation for success.

The AfCFTA has taken a good first step towards addressing commercial issues that may arise from a lack of harmonization in the early days of trading by establishing a dispute resolution body to adjudicate trade disputes amongst signatory nations, an important part of any international trade agreement. Moreover, the AfCFTA Secretariat has recognized the need for grassroots involvement to erode in-country protectionist sentiments. Its partnership with the UN Development Program, mentioned in our previous piece, is key to training local industries to allow them to take advantage of the agreement and will help promote the AfCFTA at the popular level. On digital infrastructure, the Secretariat is working with the Africa Export-Import Bank (Afrexim Bank) to develop the Pan-African Payments and Settlements System, which will be used to pay for transactions in local currency within the trading area. The initiative could help bridge the continent’s fintech gap and save African countries more than $5 billion a year in transaction fees.

Other continental frameworks can support the AfCFTA and elevate the agreement across other policy agendas. For example, the Program for Infrastructure Development in Africa (PIDA) has made the implementation of the AfCFTA one of its key priorities and discussed it at its annual conference in January.

Beyond the AfCFTA’s goals of fostering greater intra-African commercial solidarity and boosting the continent’s development prospects, it aspires to make Africa one of the world’s biggest economic players. For the agreement to succeed in elevating Africa’s global economic status, increased foreign direct investment (FDI) is paramount.

While risks exist, early investors will be better positioned to benefit from the AfCFTA’s enormous potential. Africa moved from 1 percent of global FDI inflows in 2000 to just 3 percent in 2018. The pace of FDI growth has been slow, but it has shifted over the past decade with new sources of investment and into more diverse sectors, moving away from raw materials and increasingly towards manufacturing and services (see Fig. 1 and Fig. 2).

Even though Covid-19 affected FDI inflows, which were down by 56 percent in 2020, early investors are poised to capitalize on the longer-term trends that the AfCFTA will help drive as a key component of the continent’s economic recovery plan. The pandemic has forced African governments to start preparing their economies for trading with larger swathes of the continent, to be more innovative, and to seek more foreign investment. From Ethiopia’s fast-tracking of digital and liberalization policies to South Africa’s prioritization of infrastructure development through private-sector engagement, early movers will benefit from the rewards of deepening regional integration mindsets on the continent. Additionally, there is opportunity for first movers to navigate risks by defining business practices early and establishing key relationships with stakeholders in key markets. Targeting countries that will be driving the post-Covid rebound, such as Kenya (where 2021 GDP growth is projected to be 6.9 percent) and Cote d’Ivoire (6.2 percent), will likely yield stronger returns. Moreover, both countries represent potential gateways to enter the African single market as they figure to be driving hubs for their respective regions.