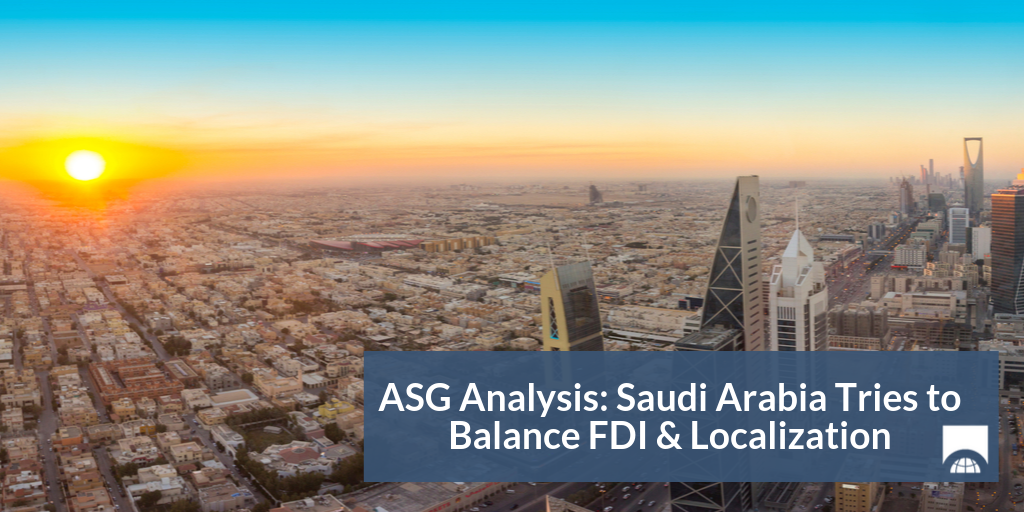 On October 1, the Council of Ministers amended the Saudi Publication Law to allow foreigners to obtain licenses for any of the 20 media-related activities that the law regulates, including publications, television and radio studios, photography, and foreign media offices. While the Kingdom has long sought to develop its media industry in line with Vision 2030, this amendment is significant as the Saudi government had previously considered foreign investment in many media sector activities too sensitive. The move continues the recent trend of gradually removing items from the “negative list” of activities closed to foreign ownership, which still includes the following sectors: exploration and production of petroleum materials (with some exceptions), real estate investment in Mecca and Medina, and tourism services related to Hajj and Umrah.

In another sign of market liberalization, on October 7 the Capital Market Authority approved amended rules that will allow foreign firms to list on the Saudi Stock Exchange (Tadawul). Tadawul opened to foreign investors seeking to buy stocks on the exchange in 2015 but had not allowed foreign companies to list their stock. The new changes also allow trading and listing in NOMU, a parallel market with lighter listing rules for smaller firms.

In an effort to retain foreign investors and reduce the burden on Saudi industrial businesses that employ foreigners, the Kingdom relaxed the expat fee regime introduced in 2017, which was part of its push to localize the workforce. Since January 2018, businesses have been required to pay fees for foreign workers as part of the government’s strategy to encourage companies to hire Saudis. In addition to subsidy cuts and a value-added tax (VAT), the imposition of expat fees made doing business more expensive. In February, the Kingdom allocated U.S. $3.1 billion in funding to compensate some businesses for the cost of expat fees. In September, the Kingdom announced that it would waive those fees entirely for businesses in the industrial sector for a period of five years.

On October 4, the Saudi Commission for Tourism approved new regulations for the hotel industry, allowing foreign men and women to book rooms together without having to prove they are married. Women, including Saudis, are also permitted to book hotel rooms by themselves, which breaks from previous regulations. These changes make doing business easier for foreign women and helps promote tourism in the Kingdom, a major goal of the Crown Prince.

These changes follow last month’s introduction of a new e-visa system, which allows visitors to enter the country as tourists, and stay for up to three months. Visas were previously restricted mainly to sponsored foreign workers, visitors traveling for business, and Muslims traveling to the Kingdom for religious reasons. On October 7, the Saudi Foreign Ministry announced that it had already issued 24,000 tourist visas in the first ten days of the program.

The Saudis have also pressed ahead with localizing sectors and occupations in an effort to create jobs for Saudi nationals. In January, the government announced a plan to localize jobs in the Information and Communication Technology sector by 2020. Hospitality is the latest sector to face stricter Saudization policies; the government announced a ban on the recruitment of foreign workers for certain positions, including front desk jobs and management positions.

Saudi localization efforts have now even been extended to consulting, which in the past had largely been the domain of foreign companies. The Kingdom recently issued a Royal Order barring government agencies from awarding contracts to foreign consulting firms (see our ASG Analysis here). Any multinational firm that registers a Saudi subsidiary, however, is considered a Saudi entity for the purpose of this decree.  This means that the consulting industry in the Kingdom will likely continue doing business largely as usual, but it also suggests that ministries will, at the very least, need to be more diligent in justifying their hiring of firms without a significant number of Saudi employees.