ASG Analysis: What Does the Saudi Regional Headquarters Program Mean for Companies Doing Business in the Region? 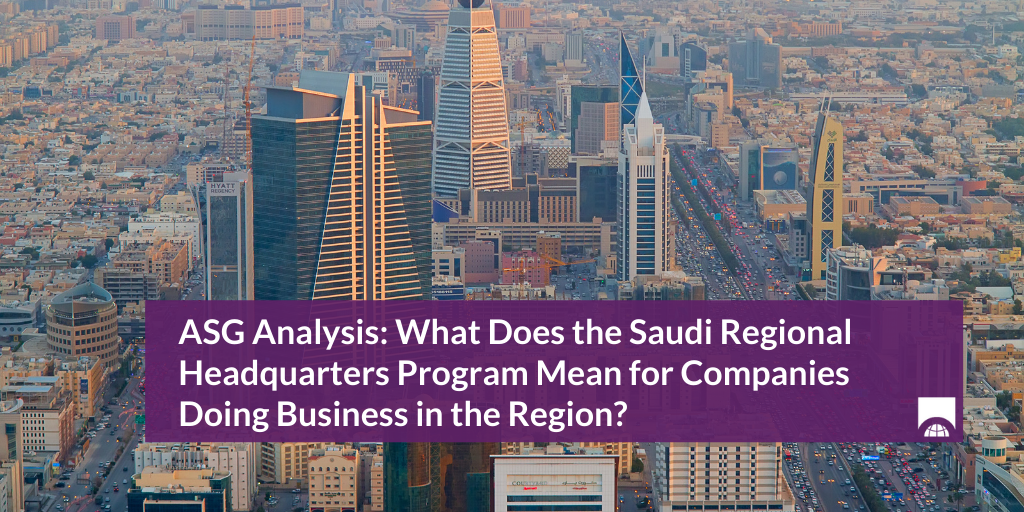 What is an RHQ?

MISA has developed a specific and relatively narrow definition of an RHQ and a set of requirements for companies to qualify for an RHQ license. These requirements have been laid out in RHQ program documents but not yet enacted into law, which leaves them open to change as MISA begins to implement the policy.

An RHQ is currently defined as a unit of a multinational company established under the laws of Saudi Arabia for the purpose of supporting, managing, and providing strategic direction to its branches, subsidiaries, and affiliates operating in the MENA region.

To be eligible for an RHQ license, the RHQ must:

The RHQ must provide all the mandatory licensing activities including (among others) formulating, monitoring, and coordinating regional strategy; reviewing financial performance; business planning and budgeting; and operational and financial reporting.

The RHQ must also provide at least three of the optional licensing activities such as sales and marketing support; human resources and personnel management; accounting, logistics and supply chain management; research and development; and operations control.

What else do we know?

There are numerous areas of technical and strategic uncertainty related to the Saudi RHQ push.

While much is still unclear about the RHQ program, companies should not take a passive approach. Below are several steps that companies (especially those that depend heavily on Saudi government procurement) should consider taking in the coming months to mitigate potential risks to their business.

ASG Analysis - What Does the Saudi RHQ Program Mean for Doing Business in the Region.pdf
Author name:
ASG