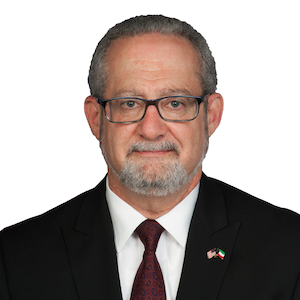 Ambassador (ret.) Lawrence R. Silverman is a Senior Advisor with ASG’s Middle East and North Africa practice. A distinguished diplomat, regional expert, and effective commercial advocate, he works with clients to develop entry and growth strategies in Kuwait and throughout the region.

Ambassador Silverman brings 30 years of experience in the U.S. Foreign Service to ASG, in the Middle East, Central and Eastern Europe, and Turkey. In his most recent official role as the U.S. Ambassador to Kuwait from 2016 to 2019, he advanced the interests of U.S. companies, promoted healthcare linkages, won greater protection for intellectual property, negotiated bilateral agreements, and worked to increase U.S-Kuwaiti security and cyber security cooperation. Previously, Ambassador Silverman was Deputy Assistant Secretary of State for Near Eastern Affairs, where he was responsible for Syria, Jordan, Lebanon, Egypt, and Israel and Palestinian issues. Ambassador Silverman also served as the State Department’s Director of Israel and Palestinian Affairs, as the Deputy Director of Media and Public Engagement for the Middle East, as Vice President Biden’s Special Advisor for Europe and Russia, as Deputy Coordinator of U.S. Assistance to Central/Eastern Europe and Central Asia, and as Deputy Director of Turkey, Greece, and Cyprus affairs.