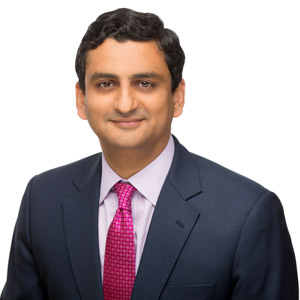 Prem Kumar is a Principal of Albright Stonebridge Group, part of Dentons Global Advisors. He leads the firm's Middle East and North Africa practice, helping clients resolve disputes, assess and manage risk, and position themselves to benefit from policy and business trends across the region.

Mr. Kumar served on the National Security Council staff at the White House for more than five years before joining ASG. As Senior Director for the Middle East and North Africa from 2013 to 2015, he was responsible for developing and coordinating U.S. foreign policy towards the region. In this position, Mr. Kumar chaired regular meetings of senior officials from across the U.S. government to review policy towards individual countries and issues, participated in the President's meetings with Middle Eastern leaders, and served as the White House representative on the Secretary of State's visits to the region. He worked closely with foreign counterparts to prepare summit meetings, negotiate bilateral agreements, and strengthen political and economic ties. Before being promoted to Senior Director, Mr. Kumar served as Director for Israeli, Palestinian, and Egyptian affairs from 2009-2013.

Earlier in his career, Mr. Kumar was a Visiting Fellow at the Council on Foreign Relations in New York, focusing on the role of the United States in the Middle East.  He also served at the United States Mission to the United Nations, where he represented the United States on Middle East issues in the Security Council, and negotiated resolutions on the Israeli-Palestinian conflict, Lebanon, Syria, and other issues in the region. Before the UN, Mr. Kumar covered Iraq issues at the U.S. State Department in Washington, helping to support the new Iraqi government and to advance the U.S. relationship with the Iraqi Kurds. At the start of his career, he served at the U.S. Consulate General in Jerusalem, focusing on the Israeli-Palestinian conflict and U.S. efforts to build Palestinian governance and security capacity.

Before joining the government, Mr. Kumar was an investment banker and then an equity research associate with Morgan Stanley in New York, where he covered technology and financial services companies and published numerous company and industry reports.

Mr. Kumar has written for or been quoted by the New York Times, the Wall Street Journal, the Washington Post, Foreign Policy, and the Atlantic, and has appeared on CNN, CNBC and PBS.

Mr. Kumar was educated at the Wharton School of the University of Pennsylvania and the London School of Economics.

He is based in New York City.