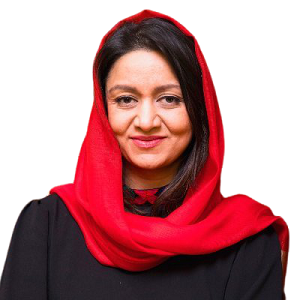 Ambassador Roya Rahmani is a Senior Advisor with ASG’s South Asia practice, where she draws on decades of experience working with governments, NGOs, and multilateral organizations in Afghanistan and across the region.

Ambassador Rahmani was the founder of the Directorate General for Regional Cooperation at the Ministry of Foreign Affairs of Afghanistan and spearheaded the Heart of Asia – Istanbul Process to strengthen regional cooperation. As a senior advisor for Planning and Policy in Afghanistan’s Ministry of Education, she developed policies, guidelines, and manuals for monitoring donor-funded programs.

Earlier in her career, she advised the NATO Joint Forces Training Center, the New York Department of Education, the United Nations Secretariat in New York, and other governmental and non-governmental actors. From 2009 to 2011, she was Program Director for MDG3 Women Empowerment Fund, a multi-country program for women’s empowerment.

Ambassador Rahmani is currently Vice Chair for Public Policy at Delphos International, a financial services firm.  She also serves as a Distinguished Fellow at the Georgetown Institute for Women Peace and Security, as well as an Advisor to the Atlantic Council and a Senior Fellow at the New America Foundation.

She earned her M.P.A. from Columbia University and a B.S. in Software Engineering from McGill University. She speaks English, Farsi/Dari, Pashto, and Urdu.

Ambassador Rahmani is based in Washington, D.C.