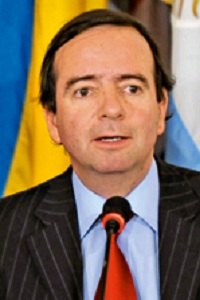 Ambassador Arturo Fermandois is a Senior Advisor at ASG, where he advises clients throughout Latin America. As former Ambassador of Chile to the United States, Ambassador Fermandois works with clients on business and legal challenges and opportunities, helping them with market entry, corporate positioning, and strategy.

Prior to his public service, he founded Fermandois, Evans and Co., LLP, a firm specializing in economic regulatory law. He was also in-house General Counsel of Banco del Estado de Chile, where he served as Secretary of the Board, and was a visiting scholar at Harvard Law School.

Ambassador Fermandois is also a member of the Legal Circle of ICARE, a prominent Chilean organization that promotes excellence in entrepreneurship and business administration. He is a member of the Chilean Association of Constitutional Law, and an Arbitrator at the Center of Arbitration and Mediation of the Santiago Chamber of Commerce. He is also a Professor of Constitutional Law at the Catholic University of Chile.

He has written several books on constitutional law and published more than 50 specialized articles in Chilean and foreign law reviews.

Ambassador Fermandois studied Law at the Catholic University of Chile and holds an M.P.A. from the Kennedy School of Government at Harvard University.

He is based in Santiago, Chile.