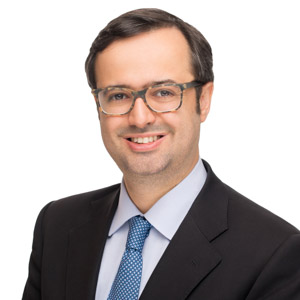 João Taborda da Gama is a Senior Advisor at ASG. Mr. Gama is a Founding Partner of Gama Glória, a law firm based in Lisbon focused on providing strategic legal advice in regulated sectors. He advises corporations and government on tax and regulatory issues, public policy and is an arbitrator in public law disputes. He is also a member of the Business Ethics Committee of the Portuguese Pharmaceutical Industry Association (APIFARMA).

Mr. Gama served as a Cabinet Member of the Portuguese Government as Secretary of State for Local Government in 2015 and as a Political Advisor to the President of Portugal from 2011 to 2013, advising on political strategy and tax policy issues during the Economic and Financial Assistance Program by the EU/ECB/IMF.  He was appointed by the Portuguese Government as President of the Municipal Financial Recovery Legislative Commission charged with the drafting of legislation to solve the debt over-hang of municipalities and was a member of the commission that drafted the Portuguese tax rulings mechanism.

Mr. Gama is the Director of the post-graduate tax program at the Catholic University of Portugal School of Law, where he teaches on taxation and tax policy, including taxation of energy, and natural resources. He has authored several books and articles on tax law in Portugal and abroad. He is the co-author of the Angolan Tax Law textbook and frequently teaches Angolan taxation and tax policy.

Mr. Gama is a member of the Practice Council of the International Tax Program at the New York University School of Law. He is an op-ed columnist at Diário de Notícias and a frequent commentator in the Portuguese media.

Mr. Gama earned both his J.D. and Master’s in Public Law from the University of Lisbon and was a visiting researcher at the New York University School of Law and at the Georgetown University Law Center.

He is based in Lisbon, Portugal.