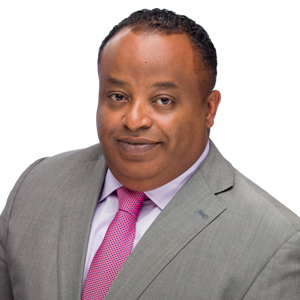 Addis Alemayehou is a Senior Advisor at ASG, where he uses his expertise in telecommunications to support client engagements across East Africa.

Mr. Alemayehou is the founder and CEO of 251 Communications, an Addis Ababa-based public relations firm and a co-founder of KANA TV, an Ethiopian entertainment, free-to-air satellite channel broadcast exclusively in Amharic.

Previously, Mr. Alemayehou served as Chief of Party of USAID’s Volunteers for Economic Growth Alliance (VEGA) Ethiopia Program which promoted increased two-way trade between the United States and Ethiopia under the African Growth and Opportunities Act (AGOA). For his efforts with this program he was awarded a Distinguished Service Award from the U.S. Department of State.

He is based in Addis Ababa, Ethiopia.