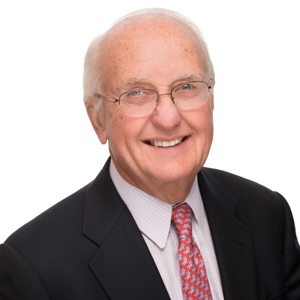 Raymond Vickery is a Senior Advisor at ASG, where he brings decades of experience promoting U.S.-India economic cooperation in the public and private sectors to his work with clients. During the Clinton administration, Mr. Vickery served as U.S. Assistant Secretary of Commerce for Trade Development, where he was responsible for India in the department’s Big Emerging Markets initiative. While at Commerce, he launched the U.S.-India Commercial Alliance in conjunction with Secretary Ron Brown’s Presidential Trade Development mission to India and organized the Advocacy Center, which successfully advocated for contracts entailing billions of dollars of U.S. exports.

Previously he was a government contracts partner in the law firm of Hogan & Hartson (now Hogan Lovell’s U.S., LLP). He also served three terms as an elected member of the Virginia General Assembly and in other political capacities. Mr. Vickery’s recent experience includes work with the Coalition for Partnership with India on the successful U.S.-India Civil Nuclear Initiative, the “Bollywood-Hollywood Initiative” to fight film piracy in India and the Coalition for Healthy India to promote U.S.-India cooperation on health.

He has served as Chair of the U.S.-India Business Council Working Group on Chemicals and Petrochemicals and has worked extensively on tariff, regulatory, and liability issues in that field. Mr. Vickery was a Public Policy Scholar in the Asia Program of the Woodrow Wilson International Center for Scholars and was an adjunct professor at George Mason University. He is the author of numerous articles on U.S.-India relations and a frequent speaker at seminars on the subject.